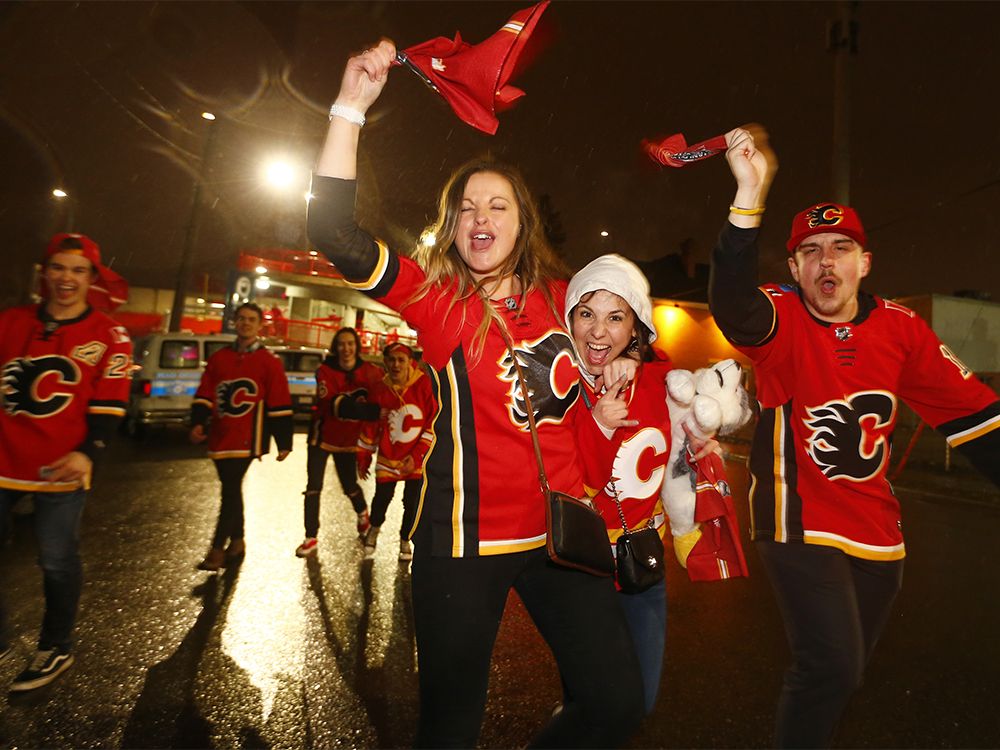 Parking bans will be in effect on game nights and police will have a no-tolerance approach for excessive honking and other forms of unruliness along the Red Mile as the Calgary Flames look to bring home their first Stanley Cup since 1989.

Insp. Clare Smart said police will be patrolling 17th Avenue S.W. with mounted units, bike units, beat officers as well as partners as they make sure fans are respectful and responsible on game days, with Calgary kicking off its playoff run against the Dallas Stars Tuesday evening.

“There’s going to be zero tolerance for the honking. With that, we have our Calgary traffic units that will be looking into those incidents and laying tickets where they can,” said Smart.

Smart said police and bylaw officers will also be ticketing anyone found to be drinking alcohol outside of licensed establishments, smoking marijuana in public, or found to be urinating in public as well as other bylaw breaches.

“Participants who come downtown to celebrate are asked to be respectful and mindful of the potential impact on surrounding communities and businesses,” said Smart.

Smart said police will be reviewing how their teams are deployed after each game and they will adjust accordingly. She also noted that away games and home games will be watched differently by law enforcement, while police will also be attending the Red Lot watch party outside the Scotiabank Saddledome.

There will be a parking ban in effect on 17 Avenue S.W., also known as the Red Mile, but the roadway will remain open to vehicles. Police are reserving the right to close the road if needed but the goal is to keep it open. Officials are encouraging Calgarians to plan their trips into the core ahead of time and to use public transit whenever possible.

Smart and other representatives speaking to media on Tuesday said they have learned from past experiences in the playoffs where fans descended upon the Red Mile, particularly during a long and ultimately disappointing playoff run in 2004, when the Flames lost in the final round to the Tampa Bay Lightning.

Reports from 2004 showed the Red Mile became a party during the Flames’ run with people travelling to the Beltline neighbourhood from across western Canada to join in on the action. Fans reportedly climbed trees and buildings while others crowdsurfed outside bars.

Several businesses in the area told Postmedia earlier this year they are excited to welcome fans back for the playoffs.

The 2004 celebrations took the city by semi-surprise as the team that year wasn’t expected to make it to the finals. This year, the Flames finished the regular season atop the division and many pundits expect them to go deep into the playoffs. Police said Tuesday they have been planning for several months in anticipation of the sports franchise finding success.

While much of the focus for policing will be around the busy street filled with bars and restaurants, law enforcemen are encouraging people to watch and celebrate respectfully wherever they are in the city.

“We’re encouraging people to celebrate the Calgary Flames’ success both at home, within their communities and on 17 Avenue,” said Ben Brackett with the City of Calgary’s festival and event planning team. “We know the Calgary fans have a long history — look at the Calgary Stampede — of celebrating in a safe and respectful manner and we expect that to continue.”

If the Flames and the Edmonton Oilers both win their first-round matchups, they will meet each other in the second round of playoffs for the first post-season Battle of Alberta since 1991. Smart said police have had conversations around how that would affect policing with a higher number of visiting fans expected in the city, but did not provide specifics on what their plans would be.

As for official predictions, Smart said she believes the Flames will go all the way this year.

“I’m just gonna say that we are bringing home the Cup,” said Smart.