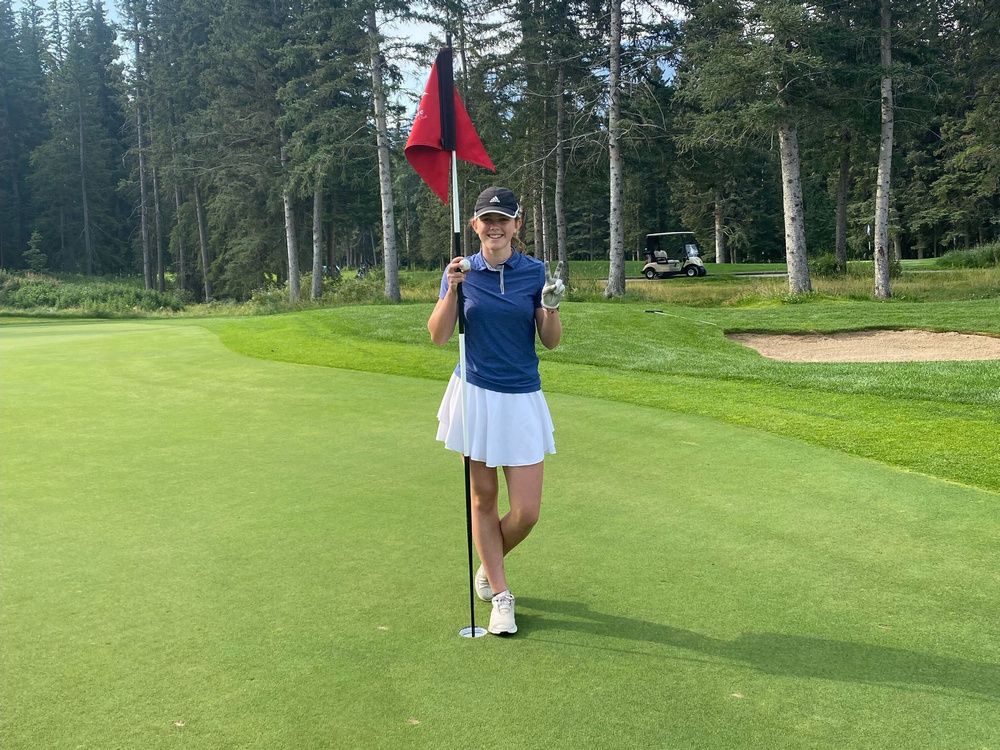 Adele Sanford was shocked after making her first hole-in-one during a tournament on Sunday, but was quickly left speechless when she hit her second just a few holes later.

“I lined up and then I re-checked my lines because I really wanted to get a second hole-in-one. I hit it, and straight away I thought, ‘Wow, that is dead straight. That has a chance of going in.’ It was a flat green. It hit the start of the green and rolled in,” Adele said on Monday.

“We all just stood there in disbelief.”

The 14-year-old was competing in the club championship at the Canmore Golf and Curling Club on Sunday — her third tournament since starting to play golf competitively in the summer of 2021.

Adele said she played some golf growing up, and was inspired to get into the sport by her mother, Kim. She was more recently encouraged by some of her friends to practice and compete competitively, and she began working with a coach.

When she pulled up to the 12th hole on Sunday, she’d been playing okay, Adele explained. She was last to hit, with those before her making it to the green or just off.

“Right after I made contact with it, I thought it would roll off the green. It hit this perfect bounce and started rolling towards the hole. I was just thinking, ‘No way, that’s not going in,” she said.

When she made the hole-in-one, everyone was cheering and celebrating for her, she said, but all she could do was stand there and smile.

“The first one was pure shock. I didn’t know what to do.”

By the time she reached the 15th hole, news about the hole-in-one had spread and other groups were congratulating her for a great hit. Hitting last again at this hole, she hit the ball straight and made her second hole-in-one of the round.

“I was happy with both of them, but the second one really, really got to me. It felt awesome,” she said.

“I wish I could say I played as good as my hole-in-ones for the other holes. Honestly, I was so unfocused after those that I could not make a good shot. But I still got my best score.”

Most golfers dream of making a hole-in-one. Adele did it twice today! For real. During club Championships to boot. It’s made for an exciting day around here! ⛳️⛳️⛳️ pic.twitter.com/UqTdwYzGEW

Darren Cooke, the general manager of the Canmore Golf and Curling Club, said the golf course was abuzz with news about the two holes-in-one.

“You can look it up online and the numbers say it’s very rare, especially with the tournament pressure,” said Cooke. “It’s exciting for everybody, especially for her being a new golfer.”

He said everyone at the golf course is proud of her after watching her practicing this summer and help with the junior programs at the facility.

He explained the course was the same course on which the men’s and women’s championship winners were determined — it wasn’t made easier for the youth competing in the tournament.

Adele said she hopes to inspire other young girls to get into golfing as a competitive sport.

“There’s only one other girl in my category and she’s three years older than me. I would like to see more girls on the course,” she said.