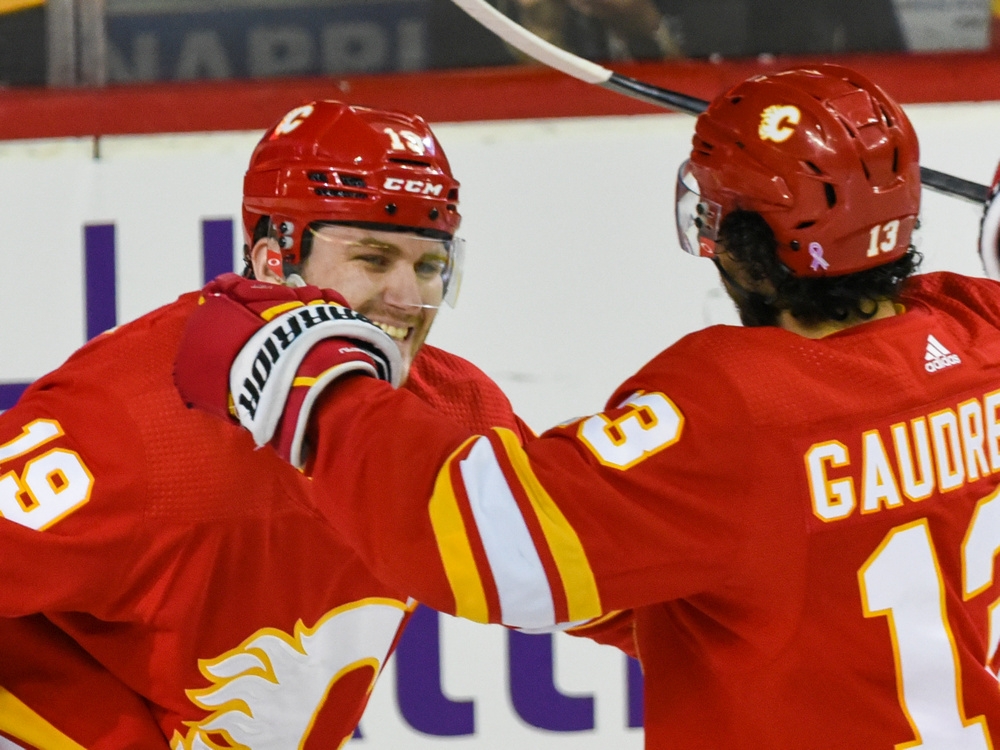 Imagine, as a Calgary Flames fan, you’re telling your grandkids about the year there was — finally — a long-awaited best-of-seven between the Battle of Alberta foes, a series that didn’t unfold the way the southern half of the province had planned.

And then what happened next? Calgary’s leading scorer and face-of-the-franchise, Johnny Gaudreau, bolted as an unrestricted free agent.

And then what happened next? Gaudreau’s first-line sidekick and captain-of-the-future frontrunner, Matthew Tkachuk, was traded away after telling team brass he wasn’t willing to sign a long-term contract extension.

This would be a heck of a double whammy, except that would be leaving out the part about being eliminated from Stanley Cup contention by the enemy Edmonton Oilers.

Going back to late May, Bitcoin has had a better stretch than the Flames.

Gaudreau is already a goner. It’s been a week since he skedaddled, following up a career-best campaign — and a Game 7 overtime goal against the Dallas Stars — by becoming the first NHL star to insist that Columbus has always been near the top of his wish-list.

It now seems like an inevitability that Tkachuk’s stint in the Stampede City will soon come to an end. He could be swapped before you finish reading this column.

Multiple outlets reported Wednesday that the 24-year-old restricted free agent — fresh off a 104-point pile-up, second on the team to only Gaudreau and eighth in the league-wide race — has informed the Flames he isn’t keen on signing a long-term pact. He is eligible to hit the open market next summer, and general manager Brad Treliving simply can’t risk losing another fan favourite, first-liner and cornerstone-type for nothing.

If ‘Chucky’ already has one foot out the Saddledome door, a trade is the only option.

This was always going to be a tricky contract negotiation for Treliving.

Tkachuk, a left-hander who has proven effective on either wing, brings a unique blend of talent and tenacity. How many guys can score a between-the-legs goal on one shift and be burrowed under the skin of an opponent on the next?

Thanks to the structure of his most recent deal, he was due a US$9-million qualifying offer, so it’s not like he would be grossly underpaid next season if he wanted to scribble his signature on that one-year compromise and wait to go the unrestricted route. When the Flames announced earlier this week that they’d opted for club-elected salary arbitration, they were really just buying time and removing the threat of an offer-sheet.

Could-be trade suitors will undoubtedly seek permission to talk contract with Tkachuk’s agent, Craig Oster, before any sort of swap is finalized.

While the salary demand will be steep, Treliving’s phone should be ringing off the hook. It’s not often a surly sharpshooter — the St. Louis-raised forward scored 42 goals in 2021-22 and has totalled 152 since being selected with the sixth-overall pick in the 2016 NHL Draft — is suddenly available. It’s a bonus that many think he’s captain material. As long as you have a generous mouthguard budget, who wouldn’t want this dude on their roster?

That’s why the Flames were ready to build around No. 19. On paper, there’s still too much talent in Calgary for a total teardown, so Treliving will presumably be looking for immediate contributors as part of any trade package.

It seems like ancient history now that Gaudreau, Tkachuk & Co. were wrapping up the top seed in the Pacific Division, that they were celebrating after a seven-game scare from the Stars and preparing for that much-anticipated matchup with the Oilers.

Treliving, who made lucrative long-term pitches to both of these marquee forwards, probably hasn’t slept a wink in all of July.

Calgary’s top-line centre, Elias Lindholm, must be wondering what he’s done to deserve such rotten luck. (And his cousin, Calle Jarnkrok, skipped town too!)

There were only eight 100-point performers in the NHL this past season. Soon, two will be former Flames.

During an appearance this week on the Spittin Chiclets podcast, Gaudreau mentioned that he exchanged text messages with Tkachuk shortly after signing with the Blue Jackets.

“He was super happy for me,” Gaudreau said. “(Tkachuk) just said, ‘Wish we were still playing together but all the best.’ ”

Did Johnny’s departure sour Tkachuk on a long-term stay in Calgary? Was his mind made up already?

Whatever the reasoning, the Flames are on the brink of bidding farewell to another star.

Even Oilers fans must be feeling sorry for them this week. That’s really saying something.