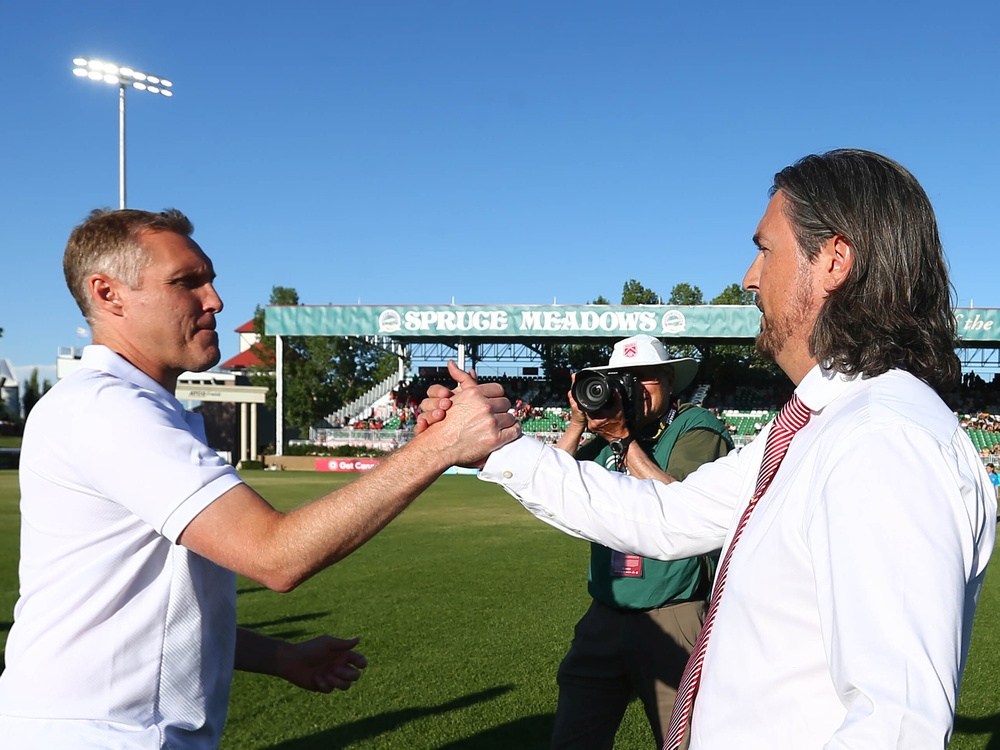 In time, York United FC could well shape up to be Cavalry East.

That team on the other side of the nation that has the look and feel of such a successful squad in Calgary.

That’s hardly a surprise given Martin Nash — a former assistant with Cavalry FC — is now the head coach of that Canadian Premier League club in Toronto.

“He’ll get there,” declared Cavalry GM/head coach Tommy Wheeldon Jr., who mentored Nash into position to take up the coaching gig in North York.

“Martin’s a very astute guy, and he’s put a good group around him,” continued Wheeldon Jr. “I think this year is a transitional year for them, because it’s new coaching leadership, it’s new players — he shipped a few out, and he’s brought some in.”

The alterations have brought on some shining moments for York, including two surprising wins over 8-4-3 Cavalry — highlighted by Tuesday night’s 1-0 marquee win in front of 2,943 fans at ATCO Field.

The decision at Spruce Meadows over the first-place Cavs, who had owned a perfect CPL record at home and sported an 11-game unbeaten run in league play ahead of the meeting, halted what was a 10-game winless slide by the now 3-5-8 Nine Stripes.

“It feels really good,” Nash said. “We put a tremendous fight up, and we knew we had to coming in here against the best team in the league. And to come here and get a result — let alone a win — is fantastic. Proud of the guys.

“We’ve been struggling of late. And it’s extremely nice to get a clean-sheet. I know they created a lot of chances, but we held strong.”

Three times, they got behind the defence in the first half, but Sergio Camargo — twice — and Ali Musse couldn’t drive it by former Cavs goalkeeper Niko Giantsopoulos. And teammate Karifa Yao just missed on a brilliant header. Meanwhile, York struck nearly 30 minutes in, when Osaze De Rosario made a lovely flick in tight on Cavs goalie Marco Carducci for the game’s first goal.

In the second half, the Cavs pressed again and eventually wound up out-manning the Nine Stripes, when Andrew Wilson was handed his second yellow card of the night and ejected for shoving down the Cavs’ Jose Escalante. Yao had another header go astray, Musse manoeuvred into prime position inside the box but blasted the ball wide, Giantsopoulos got over for a timely save on Joe Mason, and Jean-Aniel Assi got loose and took too much time and got caught from behind on a breakaway chance. The hosts also missed on a flurry of chances around the net late, when the ball somehow stayed out on multiple threats in the goal box.

It was an escape for York that it can happily take into the future.

“I think it takes you two to three years to build your own team, really, and then consistency is key,” said Wheeldon Jr. “So there’s no surprise when you see where we’re at or Forge or Pacific — they’re always in the conversation. I think Atlético Ottawa now are making a push for it. And the top clubs have it from the way they do thing behind the scenes to the culture they set in the locker room to the tactics they implement and their recruitment. There’s a lot of little details that go into it.”

Those are details that the Cavs gaffer is certain Nash, whose assistant is former Cavs player Mauro Eustáquio, can bring to York.

He did, after all, assist Wheeldon Jr. for years with, first, Foothills FC and, then, Cavalry, helping to fine-tune a winner.

“I don’t think this year is a fair reflection of him,” continued Wheeldon Jr. “I think next season will be.

“In the meantime, I think his goals-against record shows for one of the things they’ve done very very well.”

Indeed, the Nine Stripes’ 19 goals against are as good per game — they’ve played 16 contests — as the league’s top teams, thanks in part to a few former Cavs in Giantsopoulos and top-flight Calgary native and defender Dominick Zator.

Cavalry itself has allowed only 16 through 15 matches, while Forge has surrendered just 12 through 13.

At the other end of the field, however, it’s been ugly for York.

Despite the likes of De Rosario, who has six goals, the Toronto team struck for just 10 goals.

“We’re trying to get better at going forward, finding ways to create more chances — we’re working on that definitely,” added Nash, who also sports former Cavs attacker Oliver Minatel in his arsenal. “And we’re still working on it on the defensive side to keep it tight, but we’ve conceded just as many goals the last four games (before Tuesday) as we did the first 11. That’s frustrating from a team that really had a solid defensive identity.

“We’ve lost our way a little bit, and we’ve got to find a way to get it back without losing the chances we create.”

Nash and Wheeldon Jr. remain close even though they’re on opposite sides now, and that’s no big surprise. “We still talk other than the week before the game,” said Wheeldon Jr. “We’re still friends — from time to time, we’ll reach out just to catch up. Our families are close as well. Aside from that, we go radio silent for the week before the game, but we’ll be friends once that final whistle blows.” … Cavalry got two big names back with defender David Norman Jr. returning from a two-game ban for his part in a scuffle against Pacific a few weeks back, and forward Mason coming on as a substitute in the second half. But captain Mason Trafford (knee) remained out after missing last week’s 3-0 win over HFX Wanderers FC. Out, as well, was forward Myer Bevan (hamstring), with the gaffer now thinking a mid-August return is the plan … The Starting XI for Cavalry on Tuesday was: goalie Camargo, defenders Norman Jr., Karifa Yao, Bradley Vliet and Roberto Alarcón; midfielders Jose Escalante, Ben Fisk, Elijah Adekugbe, Joe Di Chiara and Sergio Camargo; and attacker Ali Musse. The subs were: goalie Julian Roloff; defender Daan Klomp; midfielders Charlie Trafford, Markus Kaiser and Elliot Simmons; and forwards Joe Mason and Jean-Aniel Assi. Scratches were forward Aribim Pepple, midfielders Skyler Rogers and Mikael Cantave … Cavalry remains down four long-term injured players — goalkeeper Tyson Farago (back), defender Tom Field (knee) and forwards Anthony Novak (ACL) and Fraser Aird (ACL) … Elsewhere in CPL action Tuesday, Forge FC (7-2-4) recorded its first-ever five-goal game in a 5-1 victory over visiting FC Edmonton (2-4-10). Woobens Pacius turned a hat-trick for host Forge in Hamilton … Next up for Cavalry is Friday night against host Pacific FC — the CPL’s second-place team at 7-5-4 — in Langford, B.C. (8 p.m., OneSoccer, OneSoccer.ca).