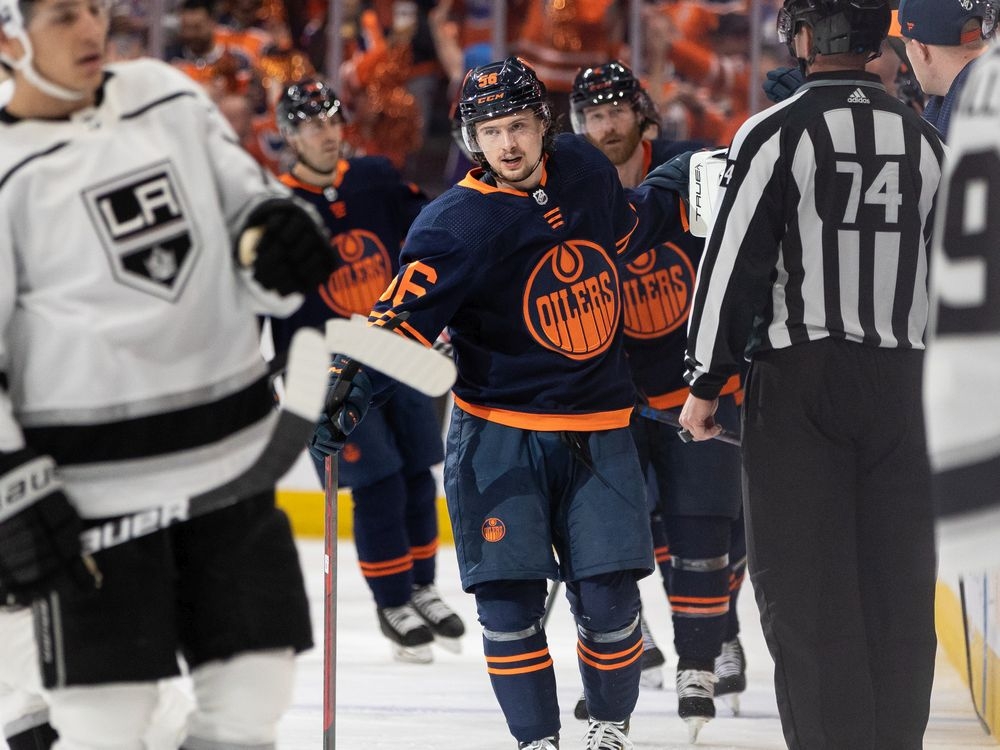 While Mike Smith’s gaffe was the talk of the town after Game 1 — live by the sword, die by the sword as the most active puck-moving goalie in the world — the other storyline to keep an eye on was the Tale of Two Young Guys.

Yamamoto had a whale of a game. Puljujarvi looked like he had some stage fright. And they need both both top-six wingers going.

The playoffs are chock full of young players who are learning on the fly. Pavel Datsyuk was very ordinary for the Red Wings early on, or Ryan Nugent-Hopkins and Jordan Eberle here in 2017, when neither scored in 13 games against San Jose and Anaheim, with RNH picking up four assists and Eberle two.

One game on Monday is a small sample. But it was revealing nevertheless.

Yamamoto, the smallest player in the NHL, 153 pounds with gusts to 160 if he eats several pizzas, was fantastic in almost 18 minutes with a goal and an assist, four shots, and a wrestling move take-down of Alex Iafallo that got him the game’s first penalty.

“He was all over the game … he did a lot of good things, hard the forecheck, got pucks back, made some great plays, scored a goal,” said captain Connor McDavid.

He got 3:04 on the power play, deftly tipping a nice Duncan Keith pass by Jonathan Quick. He played 1:14 on the penalty kill that was four-for-four. He began with Leon Draisaitl but also got work with McDavid. He and McDavid were the best two Oilers in Game 1.

Puljujarvi’s tenacity has been obvious during the season, as he retrieved pucks in the corners and kept plays going as a top-six forward. But he was only around the puck, not on the puck in Game 1. When he’s on his game, he gets inside, but he didn’t Monday, in stark contrast to Yamamoto. He had his quietest game of the season, a season low 7:52. He had one shot blocked and nothing got to Quick where he had to make a save. He started with McDavid, got some later time with Draisaitl but Zack Kassian and Derek Ryan wound up playing more on right wing than Puljujarvi.

Puljujarvi shrugged off his ice time Tuesday. Playing only eight minutes? Frustrated? No. “Of course I like to play more but there were lots of power play and PK (four aside) and I don’t play those right now,” said Puljujarvi, who has played net-front on the PP but Zach Hyman, Yamamoto and Evander Kane have been doing that more.

“I’m just going to try and play hard those minutes that I get,” he said.

His prolonged scoring slump doesn’t seem to be worrying him, either. His hands seem to have deserted him. He has 88 shots and four goals since New Year’s Eve.

“Of course, it’s a little frustrating when I get good chances and don’t get a goal but it’s part of the game,” he said. “I was a little bit nervous last night but also excited for a new playoff series.”

“If you watched how the game played out there were four power plays each and that’s 16 minutes right there, and when you’re not touching that side of the game, that means there’s only 44 minutes to play and those usually get evenly distributed,” said Woodcroft.

“I thought there were some good things about Jesse’s game, most notably some good plays on the track and did some things for his linemates, but when it’s a penalty-filled game that’s when you sometimes see a player’s minutes down.”

Puljujarvi was effective in the playoffs last season against Winnipeg, with a goal and an assist in four games whereas Yamamoto wasn’t a factor. But, in Game 1 against the Kings, Yamamoto, who had seven points in his last five league games, thrived in the pressure-cooker Monday while Puljujarvi wasn’t a factor.

The Bison King, for all of his helping bigger players along the boards by getting to pucks in the offensive zone, has four goals in his last 38 games. He looks like he’s fighting the puck.

Does Woodcroft maybe move Puljujarvi, who turns 24 on Saturday, onto the third line with Nugent-Hopkins for Game 2 so RNH has an offensive player with him? Does Yamamoto start on right wing with McDavid? Does Hyman move from left to right side and Ryan McLeod play left wing with Draisaitl on the second line? Woodcroft wasn’t saying.

A long-time NHL coach, who has no dog in the fight, is hugely impressed with Yamamoto’s drive against players who outweigh him by 50 pounds.

“The one thing you see in Yamamoto is his fearlessness. He fights to the front of the net. and every once in a while he is a pretty physical player,” said the veteran coach.

“Maybe it’s giving him too much credit but he’s like a young Martin St. Louis. He’s heard growing up that he’s too small and he’s going to prove everybody wrong.”

“Kailer was emotionally attached to the game, physically invested, did hard things … relentless on the forecheck, detailed on the back-check,” he said.

The Oilers need both kids on all cylinders in a matchup of top-two lines.

“Jesse’s had a little bit of (NHL) success but he hasn’t had that big success that was expected of him (as a fourth-overall draft pick) in the beginning. He’s always been under the gun,” said the veteran coach.

“There’s a stark difference in the expectations of both from the day they were drafted. Yamamoto was probably at a much lower bar than Puljujarvi. I think Jesse has been fighting it since Day 1.”