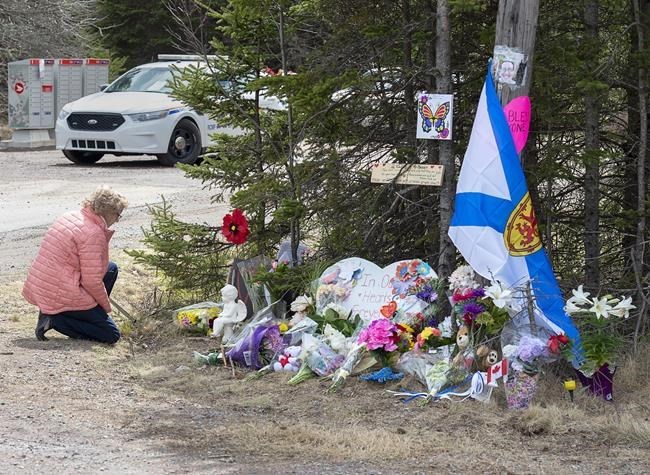 HALIFAX — Witnesses noticed the odd actions of what appeared to be an RCMP cruiser late on April 18, 2020, not realizing the driver was responsible for a murderous rampage that had just left 13 people dead in Portapique, N.S.

HALIFAX — Witnesses noticed the odd actions of what appeared to be an RCMP cruiser late on April 18, 2020, not realizing the driver was responsible for a murderous rampage that had just left 13 people dead in Portapique, N.S.

The details of the witness recollections are summarized in a document released Wednesday by the public inquiry into Canada’s worst mass shooting — a rampage carried out by a 51-year-old denturist dressed in a Mountie’s uniform and driving a replica patrol car.

Valerie Smith told police she found it “so strange for a marked police car to be driving … with no headlight, no tail lights” in the opposite direction of the police cars she had just seen racing toward Portapique.

Smith, along with four other witnesses who saw the vehicle, didn’t report their observations to police that night or before the killer carried out nine more killings on April 19.

The document doesn’t speculate on why the witnesses didn’t immediately call police, but it was not until 10:17 a.m. the next morning that the RCMP alerted the public that the shooter was driving a replica RCMP vehicle.

The commission’s investigators have said the killer escaped from the scene of the murders in Portapique at about 10:45 p.m. on April 18, and travelled to a parking lot in the Debert industrial park, about 24 kilometres away.

The first two witnesses — who lived on a road between Portapique and Debert — estimated their sightings of the replica vehicle occurred after 11 p.m., while three other witnesses reported seeing a police car in the Debert industrial park after midnight.

Smith said during her April 30, 2020 interview with the RCMP that she recalled shouting at her boyfriend as the replica car sped by their residence on Station Road.

“I said, ‘What the hell, why is there a marked cop car coming back?’ I said. ‘All the other cop cars are going to Portapique, why is this car coming back this way with no lights on, only running lights?'”

Matthew MacGillvray, who lives on the same road as Smith, told police on May 2, 2020 he also saw RCMP vehicles with flashing lights head toward Portapique before a vehicle “that looked like a cop car” passed in the opposite direction.

After the killer reached the industrial park, two teenagers who were sitting in a football field area listening to music noticed the replica police car entering the area. The summary says that between 12:30 a.m. and 1 a.m. on April 19 they watched the car “repeatedly circling around in the business park.”

“There were some things off, and he just wasn’t acting like a police officer,” one of the teens was quoted telling an RCMP investigator in a May 2020 interview.

“He was like, going on the side of the road, kind of pulling off like every like, couple metres, checking things out,” the teenager said. The extremely slow driving stood out. “It was really weird,” he said, noting the police car also had a dented bumper and “a pine tree branch hanging out of the trunk.”

Dave Brown, who lives near the industrial park, said he was watching TV when one of the teens — his stepson — returned home. Brown told RCMP investigators that he dozed off, woke up some time after 1 a.m. and then went out on his deck for a cigarette.

“While outside, he saw what he believed to be a marked police cruiser parked about 300 feet from the deck of his home …. He made no further observations of the vehicle or whether there was anyone around,” the document says.

The latest revelations of what witnesses saw the first night of the mass shooting may again raise questions about why the public wasn’t told sooner that the gunman, Gabriel Wortman, was in a replica police car. That topic is expected to be addressed at later stages of the hearings.

The inquiry’s investigators have documented how dispatchers relayed information from a 911 call from Jamie Blair — one of the early Portapique victims — who at 10:01 p.m. on April 18 said, “there is a police car.”

Children sheltering in a Portapique home also told a 911 operator, “it was a police car.” And a 911 call from a woman whose husband was shot stated at 10:28 p.m. said, “somebody in a cop car shot at us.”

In the weeks following the mass shooting, the RCMP’s senior officers said during news conferences they only “confirmed” that the killer was driving an RCMP replica vehicle after speaking to the killer’s spouse at about 6:30 a.m. on April 19.

The summary released Wednesday about the killer’s actions between the time he left Portapique and 5:45 the next morning also says that police found a number of items he discarded in Debert, which were discovered in searches that began a week after the shootings.

The items included empty, plastic ammunition packaging, two slippers, a belt with a pistol holder, a magazine pouch and an empty handcuff pouch. There was also a police traffic radar and two RCMP high brown boots with “Wortman” inscribed inside.

Wortman was killed on the morning of April 19 by an RCMP officer while at a gas station north of Halifax.

This report by The Canadian Press was first published March 9, 2022.