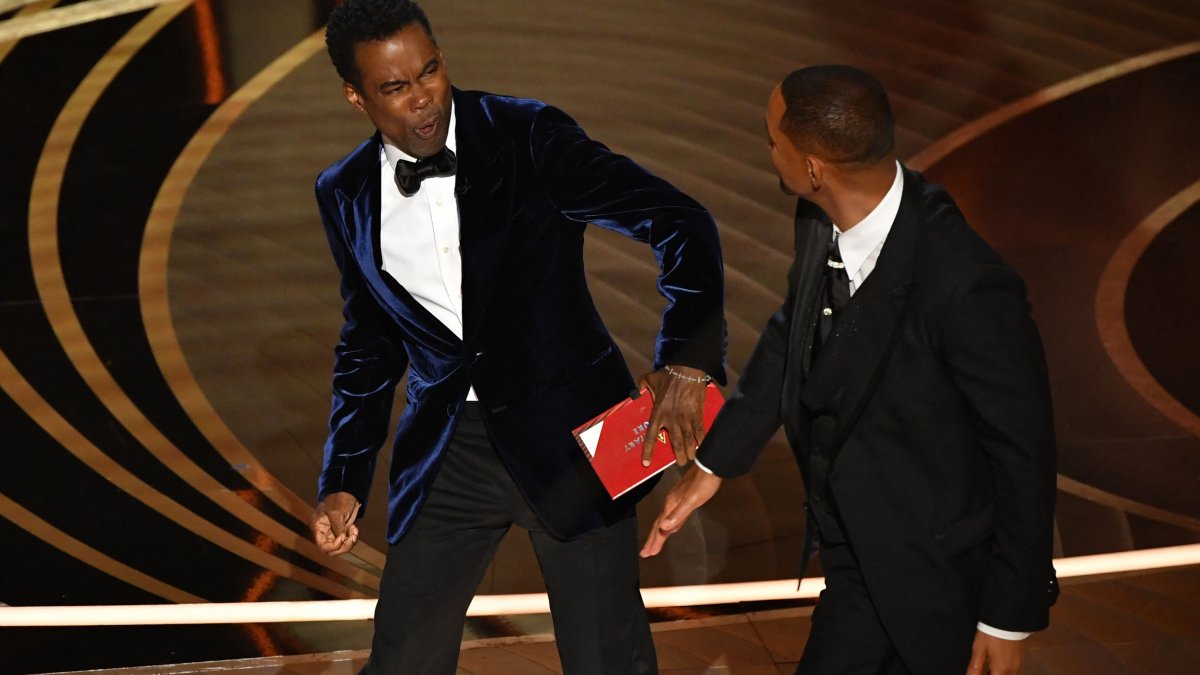 Will Smith confronted actor and comedian Chris Rock on Oscars stage after the comedian made a joke about Smith’s wife, Jada Pinkett-Smith.

Rock joked about Pinkett-Smith starring in “G.I. Jane 2,” apparently because her head is shaved. She did not laugh at the joke.

Smith could then be seen walking to the stage, where he appeared to slap Rock with an open hand.

Pinkett-Smith last year publicly shared that she has alopecia, an autoimmune disorder that leads to hair loss. “G.I. Jane” was a 1997 movie starring Demi Moore as a woman who joins the U.S. Navy and shaves her head soon after.

Viewers at home were confused as to whether the altercation was staged at first, although the audio was cut as Smith seemed to yell an obscenity at Rock while walking back to his seat in the audience.

Once seated he again, on camera, yelled at Rock “Keep my wife’s name out of your f—— mouth!”

Rock, for his part, seemed stunned.

“Will Smith just smacked the s— out of me,” he said to the camera. He tried to tell Smith it was a joke, but Smith was not having it, and Rock moved on.

Los Angeles police said late Sunday that they were aware of the incident involving “one individual slapping another,” but the “individual involved” — presumably Rock — decided not to file a police report.

“If the involved party desires a police report at a later date, LAPD will be available to complete an investigative report,” the LAPD said in its statement.

The academy posted a brief statement on Twitter after the ceremony saying it “does not condone violence of any form. It did not mention any specifics around the incident.

Diddy, the next presenter up after Rock, attempted to redirect the ceremony from the altercation, which left the audience stunned.

“Will and Chris, we’re going to solve that like family. Right now we’re moving on with love. Everybody make some nose,” he said before beginning his presentation.

Smith later won a best actor Oscar for his role in “King Richard,” where he tearfully apologized to the Academy for the confrontation, but did not mention Rock or offer any apology to him.

In his speech, he noted that Richard Williams, the father of Venus and Serena Williams he portrayed in his award-winning role, was also fiercely protective of his family.

“This is a beautiful moment,” he said. “Art imitates life. I look like the crazy father. But love will make you do crazy things.”

Pinkett has been open about her alopecia struggle, sharing insight on her Instagram account to her millions of followers.