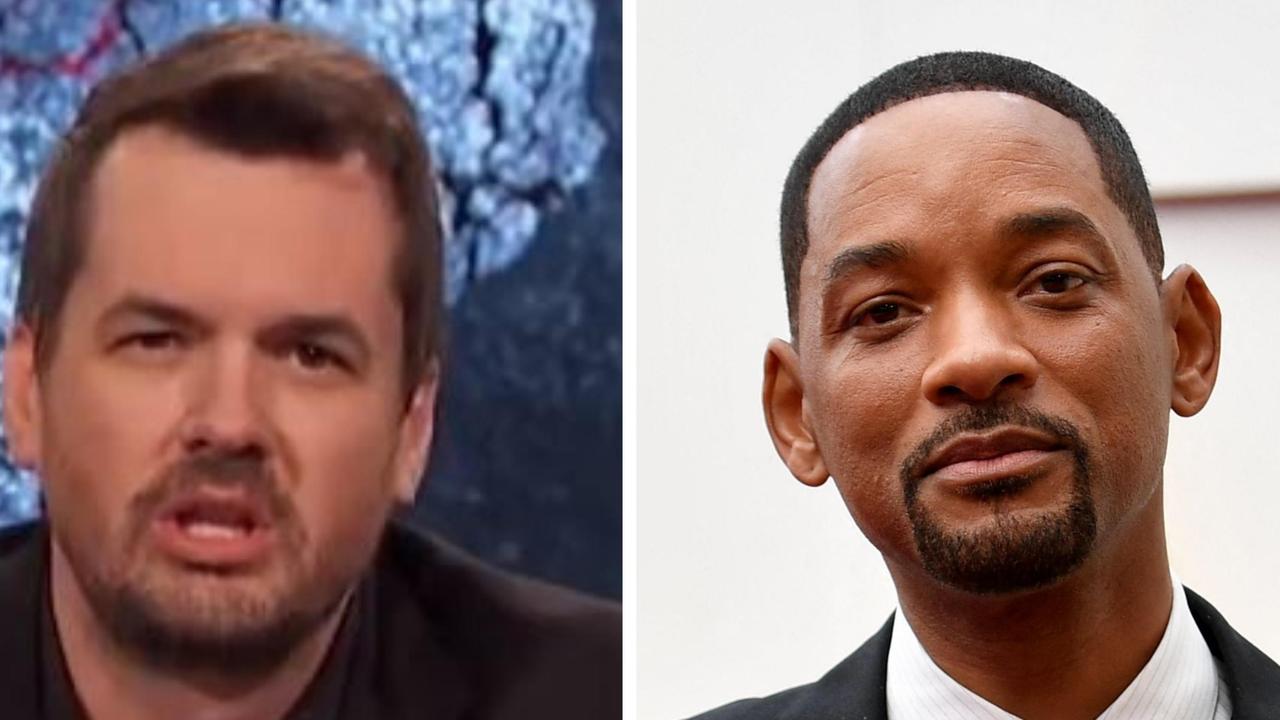 Australian comic Jim Jefferies has furiously called out Will Smith – and slammed the A-listers in the Oscars audience who “did nothing”.

Australian comedian Jim Jefferies has slammed actor Will Smith in a fiery radio appearance today, alleging the Hollywood star’s nice guy reputation was all a “fraud” after his explosive Oscars outburst.

Smith stormed the stage and hit comedian Chris Rock across the face during yesterday’s Oscars ceremony, after Rock made an ill-advised joke about Smith’s wife Jada’s alopecia.

Returning to his seat, the star – who won the Best Actor Oscar just minutes later – repeatedly screamed at Rock: “Keep my wife’s name out your f***ing mouth.”

In an interview with Kyle and Jackie O this morning, US-based Aussie comic Jefferies firmly took Rock’s side in the jaw-dropping stoush.

“It’s not on. You can’t just hit someone in the face at work, and not be dragged out of the bloody room and still get to have an award straight afterwards,” he said.

He also addressed Smith’s Best Actor speech, in which the tearful star spoke of defending his family from “disrespect” and said sorry to the Academy for his earlier behaviour.

And Jefferies questioned whether Rock even knew the backstory to Jada’s shaved head, wondering if he really meant to poke fun at her alopecia.

“Do you really think that Chris Rock knew that Jada Pinkett Smith had a condition? There’s been other things on the news. Ukraine’s been happening; I haven’t been keeping up on Jada’s hair. She’s had that haircut before, it’s not unprecedented for her to have that hair,” he said.

Jefferies also slammed those inside the Dolby Theatre, among them the event’s organisers and the A-list audience, for letting the entire incident play out without consequence.

“He got to sit back in his seat!” he said, expressing disbelief that Smith then received a standing ovation for his Best Actor win.

“What I didn’t like was the actors all stood up and applauded him, comforting him … someone should have yelled out: ‘Say sorry to Chris.’ Or at least stayed seated. But they all did nothing.”

Jackie O said the whole outburst felt “really unlike Will Smith”, who she had always understood to be “one of the nicest guys in Hollywood”.

“Yeah, yeah – in his rap songs he never swears, he always tries to stay wholesome, but he’ll swear at the Oscars? The guy’s a fraud,” Jefferies said.

He also called out Smith for his jubilant behaviour at the Vanity Fair Oscars after-party following the ceremony.

“He went out afterwards and danced to [his 1997 hit] Gettin’ Jiggy With It at the afterparty, holding his trophy!”

Smith was striking a different note today, issuing a grovelling apology for the incident via his Instagram.

“My behaviour at last night’s Academy Awards was unacceptable and inexcusable. Jokes at my expense are part of the job, but a joke about Jada’s medical condition was too much for me to bear and I reacted emotionally,” he wrote.

He offered a public apology to Rock, writing: “I was out of line and I was wrong.”