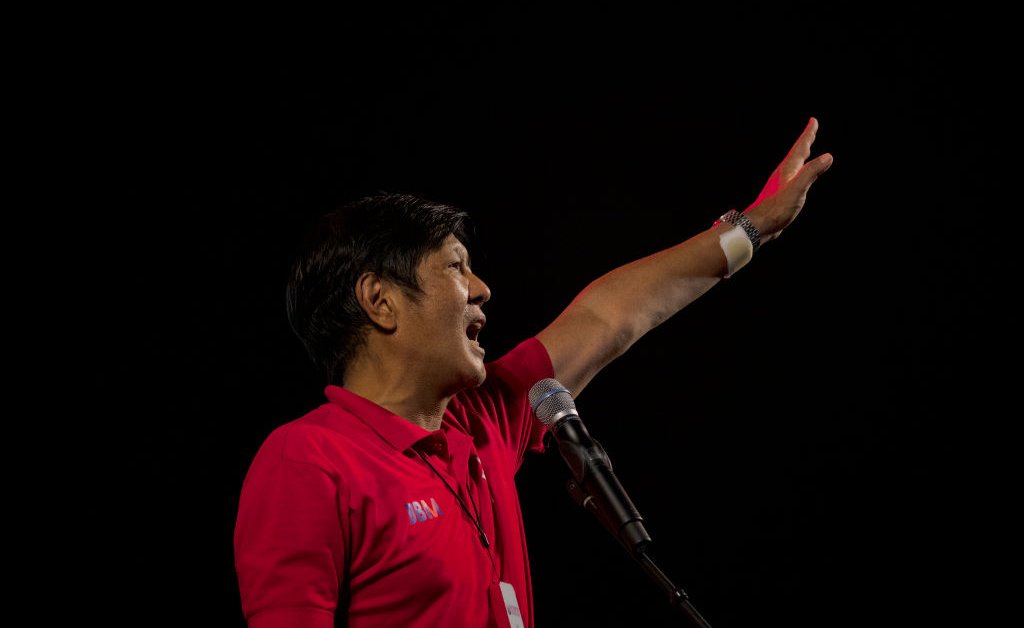 On Feb. 25, 1986, hundreds of thousands of Filipinos, from nuns to office workers, occupied one of the Philippine capital’s main arteries—the culmination of a four-day mass protest dubbed the “People Power Revolution.” It was unlike anything Asia, or the world, had seen before. By evening, the authoritarian regime of ailing President Ferdinand Marcos ended—with Marcos leaving for exile in Hawaii along with his wife and children. Replacing him was Corazon Aquino, the widow of an assassinated pro-democracy opposition leader.

More than three decades later, in October 2021, the late dictator’s son and namesake, 64-year-old Ferdinand “Bongbong” Marcos Jr., announced his intention to become the next president of the Philippines. He has teamed up with the daughter of outgoing populist President Rodrigo Duterte, Sara Duterte, who is running for vice-president. They make a formidable team, and are far ahead of other contenders in opinion polls: Marcos had an unprecedented 45-point lead over his closest rival—current vice president Leni Robredo—in a February survey.

One data point stands out from opinion polls: The majority of Marcos’ supporters are those under 30, voters who were not born when his father imposed nationwide martial law and presided over human rights violations, corruption, and a massive economic slowdown. The younger Marcos also knows where to meet these supporters: his team engages with millions of users on social platforms—especially TikTok and Facebook—both inside the Philippines and abroad.

“He’s a person with a heart,” says Reian Azcune, a 20-year-old voter in Rizal province. “In all of his campaigns and rallies he never really intended to make fun of others, or he never maligned anyone.”

Marcos Jr.’s 2022 presidential campaign advocates “unity” as a means of lifting the country from the economic doldrums of the COVID-19 pandemic. Despite this message, he has become the most divisive candidate in the race. Political opponents decry the human rights violations during his father’s dictatorship, the billions of dollars in ill-gotten wealth, and the family’s unpaid taxes. They also point out that matriarch Imelda Marcos has managed to avoid jail, despite being convicted of graft.

Overseas Filipino worker Sherina Erno doesn’t plan on voting for Bongbong Marcos in the polls. The Marcoses, she says, have “ruled with martial law for so long. So why is the Philippines still in shambles?”

Critics say a Bongbong Marcos victory would pose a huge threat to Philippine democracy. Already, the Southeast Asian nation of 110 million people has experienced Duterte’s bloody drug war and crackdown on dissent, which was so reminiscent of the elder Marcos’ brutal years in power.

But for those who did not experience his father’s regime, the younger Marcos appears to offer a refreshing choice—especially after preceding presidents failed to solve the grinding poverty, weak infrastructure, and deep-seated corruption that dominate the daily lives of so many Filipinos. “You have a succession of administrations which really came short of fulfilling the fundamental ideals and aspirations of the Filipino people, which was expressed in the 1986 revolution,” says Richard Heydarian, a professor of political science and Asian geopolitics expert based in Manila.

The late President Ferdinand Marcos waves goodbye to supporters from the balcony of Malacañang Palace in Manila following his oath-taking ceremony as victor in the Philippine Presidential snap elections, Feb. 25 1986. Beside him stand the First Lady Imelda Marcos, and their children, including his son and namesake, Ferdinand “Bongbong” Marcos Jr. This was the last public appearance by Marcos and his family before leaving for exile in Hawaii.

What is Ferdinand Marcos’s legacy in the Philippines?

Marcos imposed nationwide martial law in September 1972 in response to escalating protests from civil libertarians and threats of communist insurgency.

Data from Amnesty International shows that while Marcos was in power, around 70,000 “enemies of the state” were detained, some 34,000 of them tortured, and more than 3,000 killed. Independent media outlets were also shut down. The repression lasted for nine years.

His loyalists say the period was a golden age of development. Cultural centers, specialist hospitals, and even a nuclear power plant were erected, funded in large part by foreign loans. But the power plant was never used, and the country’s external debt soared from $800 million at the start of Marcos’ first term in 1965 to $28.3 billion when he was ousted—more than 80% of the country’s GDP. In 1984, the Philippine GDP shrank by a record 7%—the worst contraction since World War II. “Crony capitalism,” in which Marcos favored the business interests of friends and relatives, was blamed.

The Marcos family was also accused of stealing up to $10 billion from state coffers, a claim they have repeatedly denied even though authorities already have recovered around $3.3 billion in unexplained wealth.

Read More: Imelda Marcos Has Had Part of Her Art Collection Seized

Why is Bongbong Marcos so popular?

Marcos Jr.’s opponents repeatedly bring up his father’s legacy, but experts say that is backfiring. “Many people are voting for Marcos, not because they like Marcos more; they just don’t like being told and being treated as bad [people],” says Antonio Contreras, a political analyst in Manila. “No one likes that.”

Voters have been swayed by his decision to stay out of the mudslinging, and they approve of his promise to unite the country while continuing with the legacy of Rodrigo Duterte. “A great leader doesn’t need to influence someone with hate,” says 20-year-old voter Azcune.

This positive messaging extends to Marcos’ social media platforms, where political content is interspersed with light-hearted family vlogs. He has over 1.2 million followers on TikTok, around 2 million subscribers on YouTube, and another 5.3 million followers on Facebook. Fatima Gaw, assistant professor of communication research at the University of the Philippines, says it’s “almost impossible” to distinguish between propaganda and genuine support on such platforms.

Marcos Jr. also benefits from an existing power base in the northern provinces, in a country where politics is inherently dynastic. He entered politics for the first time in his home province of Ilocos Norte in 1981, as a 23-year-old vice-governor.

The Marcos family returned from exile in 1991 and began to astutely revamp its image. Bongbong Marcos became a senator in 2010, and ran for vice president in 2016, albeit unsuccessfully.

Throughout his time in public life, he has refused to apologize for rights violations and corruption during his father’s reign—saying that history should be left “to the professors.” But educators have shirked the task. A recent study also found as few as 6% of pages in select 5th and 6th grade Philippine public school textbooks were allotted to the Marcos dictatorship.

“The education system did not teach the martial law experience properly, historically—so that means that voters born after 1986 can easily be convinced that all of that was not true. Or at the very least, that it’s not important,” says Antonio La Viña, former dean of the Ateneo School of Government. With more than half of voters aged between 18 and 41, the effect is significant.

The Philippines has also failed to hold members of the Marcos’ family accountable for their crimes—matriarch Imelda is still free. Bongbong Marcos himself, who was convicted for tax evasion in 1997, did not go to jail for it after an appeals court modified the ruling. It’s “an indictment on the complete failure of the Philippines to institute rule of law,” Heydarian, the political science professor, says—adding that it also shows the country’s failure to confront its dark past.

The result is a surprising attachment to the Marcos family. At the launch of Bongbong Marcos’ campaign, a celebrity emcee rallied the crowd saying: “We have a winner, the fight is over! The love for Ferdinand Marcos Sr. is alive!”

Protesters raise clinched fists as they hold banners with anti-Marcos slogans during a demonstration to commemorate the 36th anniversary of the People Power Revolution in 1986 that ousted the late dictator Ferdinand Marcos, in front of the People Power monument in Quezon City, suburban Manila on Feb. 25, 2022.

Is a Bongbong Marcos victory a threat to democracy?

For sociologist Nicole Curato, the coming election is nothing less than “a battle for the nation’s narrative.” Marcos Jr.’s critics will argue that victory signals “democracy’s failure to hold corrupt politicians accountable,” she tells TIME in an email. “His supporters will say that Marcos Jr.’s presidency will signal the country’s democracy [is] moving forward and looking to the future.”

Whether or not Bongbong Marcos will be like his father if he is elected president, meanwhile, remains to be seen—but experts agree that he’s likely not to follow his father’s strongman footsteps.“He doesn’t have the kind of drive and ambition and scale of vision that his father had,” says Heydarian. “And so I doubt the Philippines will move towards a 20th century-style dictatorship. I think that is kind of passé.”

But at the very least a Bongbong Marcos presidency will signal that the country’s problem with dynastic politics is worse than ever. “This is like just cementing the ruling class,” La Viña, the former dean of the Ateneo School of Government, says. “He’s not an outsider taking over.”