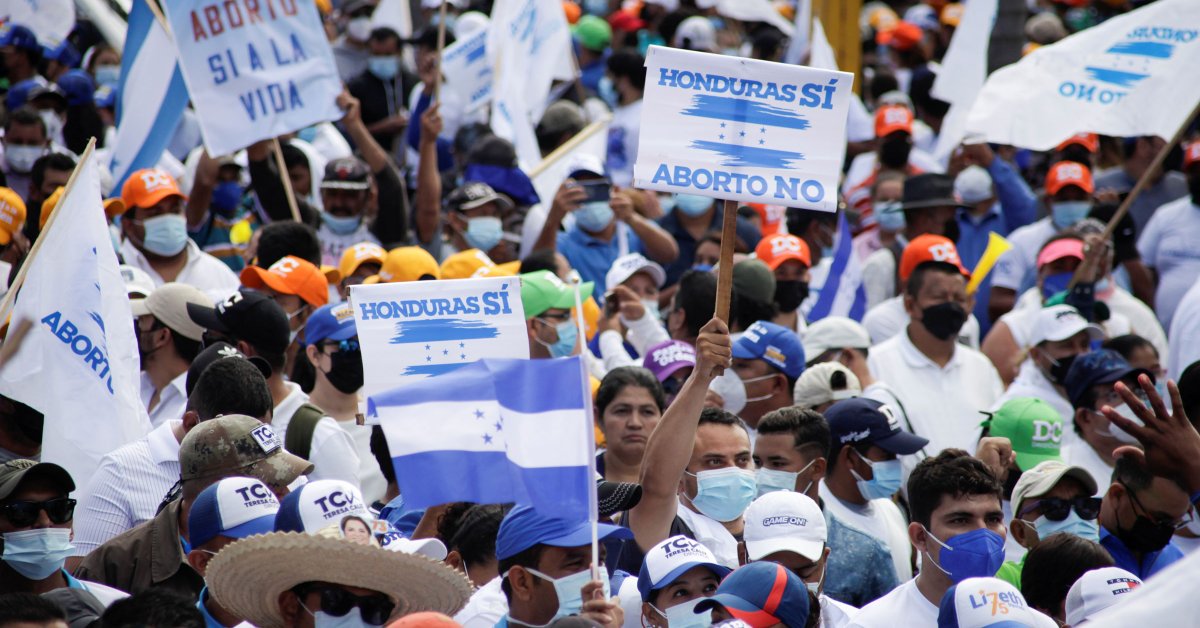 A few years ago, in a small home off an uneven road in Honduras, I got a little peek into what life is like when abortion is illegal.

There, I met a woman in her early 20s, who for privacy I’ll call Alma. She lived with her family and a smattering of extremely cute animals – there were a few little dogs, a kitten or two, a hen and her chicks. Months earlier, Alma had had stillbirth – she hadn’t even known she was pregnant, she told me. Doctors, though, suspected that she had taken medication to induce an abortion. They called the police. When I met Alma, she was awaiting trial.

In Honduras, abortion is outlawed, along with emergency contraception. Sexual violence is commonplace, and women are barred from a basic tool to prevent pregnancy after rape, and then potentially jailed if they end an unwanted one. Through both abortion restrictions and endemic violence, women hear one message: Your body isn’t yours.

Read More: Inside Mississippi’s Last Abortion Clinic—and the Biggest Fight for Abortion Rights in a Generation

Alma was far from the only woman I’ve met whose body has borne the weight of abortion bans. There was a girl I called Sofia when I wrote about her, also in Honduras, forced to have a child as a 12-year-old rape victim. There was Anita, the pseudonym for a woman who fled war in South Sudan and was forced into sex by her husband even after a doctor told them another pregnancy too soon could kill her; she self-induced an abortion and nearly paid with her life. There was Silvana, raped as a child during Colombia’s civil war, who starved herself into a miscarriage. There was a woman whose name I don’t know, but whose story I heard again and again in a Bangladeshi camp full of Rohingya Muslim refugees from Myanmar – to end an unwanted pregnancy, she put a red-hot brick on her stomach, searing off her flesh.

A leaked draft of a Supreme Court opinion suggests that the Court is poised to overturn Roe v. Wade, the 1973 case that legalized abortion for American women. Those of us who have followed the long arc of reproductive-rights law in the U.S. aren’t surprised, although many of us are devastated and angry. Those of us who have reported on abortion rights and access, and women’s rights more broadly, know just how high the stakes are.

The reality is that abortion access, and the procedure itself, has changed quite a bit since the bad old days of pre-Roe America. Now, a combination of misoprostol and mifepristone, taken orally, can effectively and safely induce an abortion without the potentially fertility- or even life-ending complications of older methods that required something be inserted into the cervix. Activists have worked hard to make these medications are available to women in places where abortion is illegal or hard to get, including in the United States. If Roe goes, these activist networks will undoubtedly expand. Abortion won’t end, and activists will try to make sure that as many women as possible can access safe abortion-inducing medications. Again, the pro-choice movement will save women’s lives.

Read More: The Battle Over the Future of the Anti-Abortion Movement if the Supreme Court Overturns Roe v. Wade

But activists working to deliver safe abortions in a hostile legal environment simply cannot reach every woman in need. Even now, with Roe still standing, a great number of American women cannot get the abortions they want. And the women who are best able to access safe abortions will be those with greater resources: Money, to be sure, but also the education, connections, and internet literacy to know where to find help, and how to tell charlatans and scammers from safe providers. Women who are already vulnerable – who are poor, who are young, who live in rural areas, who don’t speak English well or at all, who are the least able to take on a child they haven’t planned for – are the most likely to fall through the cracks.

The criminalization of abortion will in and of itself discourage some women from pursuing abortion procedures, and those women will carry pregnancies to term against their wishes, making them more likely to be stuck in poverty and tied to abusive men. Some of those women will die because of that lack of choice. One estimate suggests that maternal mortality might increase by as much as 21% if abortion is outlawed nationwide.

Other women, fearful of the law but desperate to not be pregnant and too scared or ashamed to ask for help, will take matters into their own hands. Others won’t know how to find help or where to look. Some will be fine. Some may not be.

Read More: If Roe v. Wade Is Overturned, Our Clinic Will Stop Providing Abortions Immediately. But We Won’t Shut Down

Overzealous prosecutors in the U.S. have already jailed women over suspected abortions. If abortion is outlawed, every indication is that more women, and certainly more doctors, will wind up behind bars.

The world’s most “pro-life” nations show us what could be in store. In countries with the strictest anti-abortion laws, women face pervasive violence from men. That isn’t to say that anti-abortion laws cause violence. It is to say that violence against women, like restrictions on what women can do with their reproductive lives, is a tool of misogynist dominance. It stems from the urge to force women to do your bidding, and the belief that women’s bodies and women’s lives should be under male control. It’s not a coincidence that the countries where women do the best – where they are the most economically prosperous, the safest, have the highest levels of education and employment, are the most supported in parenthood, and are the freest – are also countries where abortion is legal and contraception is easily accessible.

By curtailing abortion access, the U.S. is again making itself an outlier on women’s rights, and joining a small number of nations – Poland, Hungary, Brazil, Russia, China – that are moving ever rightward toward authoritarianism. While many countries have liberalized their abortion laws as they have become more democratic, just a handful have restricted reproductive rights – and those restrictions have gone hand-in-hand with shifts away from democratic traditions and toward autocracy.

According to the U.N., nearly 50,000 women’s lives could be saved each year simply by repealing anti-abortion laws. The U.S. has instead restricted abortion even further. Overturning Roe would be the biggest blow in nearly 50 years to abortion rights in the U.S., and just the first step in a broader conservative effort to make abortion totally illegal – and if anti-abortion activists get their way, a national abortion law would have no exceptions for rape, incest, health, or the pregnant woman’s life.

These are the stakes if this draft opinion becomes law: Some women’s lives, many women’s futures, and all of our freedoms.