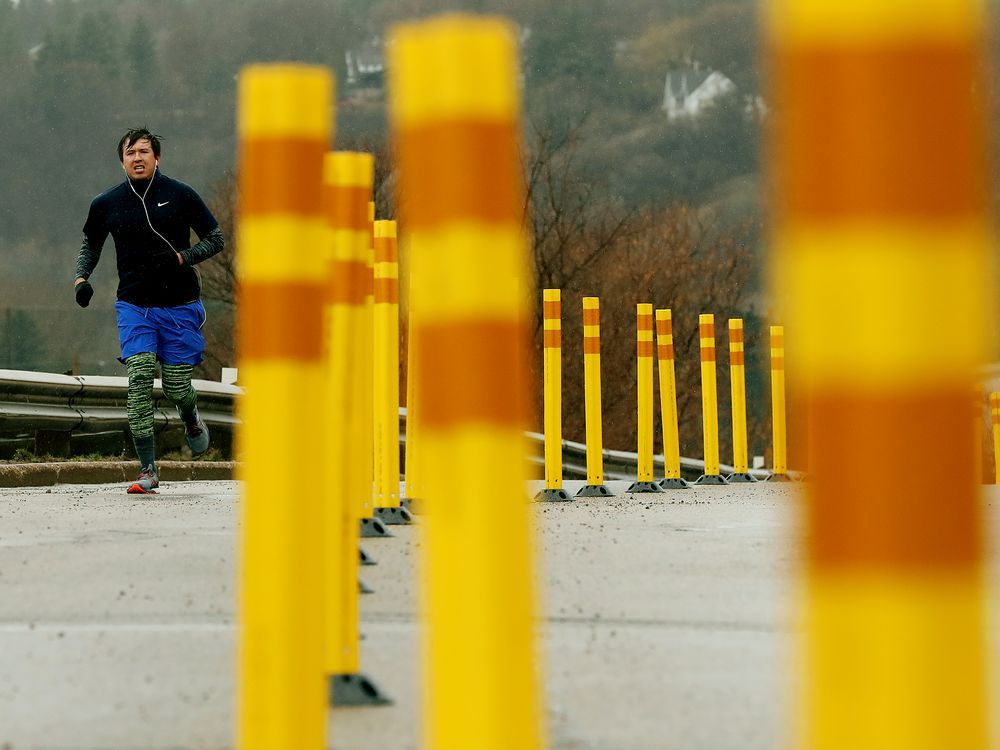 When will the City of Edmonton transportation department stop following some American traffic standards manual and apply some common sense when it comes to bike lanes/multi-use paths to not put cyclists in harm’s way? Take for example Victoria Park Road. The city has again placed secured pylons on the hill to create a multi-use path.

What is different this year? At the bottom of the hill, they have installed three concrete barricades to prevent vehicle access on to the multi-use lane, however, there is not an opening for cyclists as in the past two years. They now have to use a short ramp with a 90-degree turn and then an immediate 90-degree turn onto a busy sidewalk. Two back-to-back 90-degree turns in approximately three feet, fine for walkers or runners, not good for cyclists.

The other option is to continue to use the sidewalk, which defeats the purpose of the temporary lane closure. Or they are forcing the cyclists to veer into the vehicle lane to go around the concrete barricades. This scenario is an accident waiting to happen.

Please remove the centre concrete barricade and place a similar pylon so that there is egress and ingress for cyclists.

I am saddened that teachers are being treated so unprofessionally by this government. Imagine a legal hearing where the judge, jurors and rules are chosen by the accusing side and, if the accusers are ruled against, they can just set aside the verdict if they decide to. Bill 15 will allow the minister to do that.

Every profession in Alberta is allowed self-regulation. Bill 15 will deny teachers this process which will take them out of a professional status that all other professionals are granted in Alberta. Alberta is known as a standard bearer of excellence for public education systems. Why would anyone want to destabilize and create a similar antagonistic system like that which only B.C. has created in Canada, which is fraught with bad relations between the government and the teachers?

Alberta parents give very high marks on the service and education their children receive. If the Conservative government had to reach that same plateau of satisfaction to stay in power, they would be out tomorrow. Let this government know that you do not wish them to destroy a public education system that is considered a high-flyer by those in the education business across Canada and the world.

The Liberal government says it’s considering putting up a billion dollars payable to provinces that wish to ban handguns. The Liberals must be buoyed by the success of the cannabis ban this country had for decades that worked so well that, um, actually, no; it didn’t work at all. They themselves, gave up and legalized pot.

But cue the TV cameras! Watch live while that billion of your tax dollars is well-spent by police forces raiding suburban homes. We’ll see them face those pernicious, law-abiding citizens who gave their name, address, phone number and SIN to the government when they registered their once-legal firearms, forcing them to surrender those now.

Criminals will surely quake in their boots at that. The already-illegal, smuggled and stolen-gun trade will collapse in a hurry.