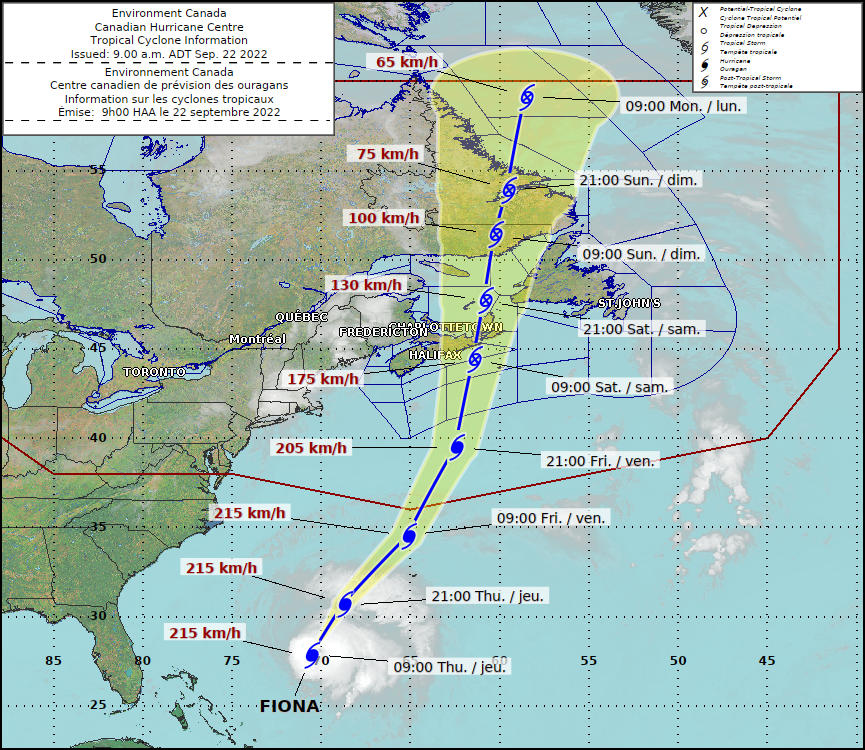 Eastern Canada is being warned to brace for impact as Hurricane Fiona continues to make its way north — expected to make landfall this weekend.

The Canadian Hurricane Centre is predicting the now Category 4 storm will be a severe weather event for Atlantic Canada and Eastern Quebec.

“It’s a currently a very dangerous storm, and it’s going to continue to be as it moves up into Atlantic Canada,” Neil says. “We expect very, very strong winds as well as very heavy, significant rainfall.”

A ‘Tropical Storm Watch‘ has been issued for Nova Scotia, Prince Edward Island, and Newfoundland, as well as the eastern portions of Labrador, Quebec, and New Brunswick.

Forecasters say the deep hybrid low-pressure system possesses both tropical and intense winter storm properties. As of Thursday, the storm had maximum sustained winds of more than 200 km/h.

Neil warns that whether or not the storm is classified as a hurricane when it arrives, it will still present a danger for residents in the impacted areas.

“Whether it’s tropical or post-tropical, either way it doesn’t matter,” says Neil. “Once it goes post-tropical people think it weakens, it does not. It’s still a very, very dangerous storm that is going to produce very significant impacts to many of the Atlantic provinces and parts of eastern Quebec through the weekend.”

Along with the wind and rain, the storm is also expected to bring high waves that could lead to coastal flooding, as well as widespread power outages and structural damage to some buildings. Any buildings under construction will be particularly susceptible.

Residents are being urged to make any household preparations now, ensuring they have emergency kits ready, their storm drains are cleared, and outdoor furniture is removed. Environment Canada recommends each household has sufficient food and water for up to 72 hours, and residents should ensure they have a way to charge cell phones if they do not have a landline.

“We could be feeling the impact from this for days after for sure,” Neil says.

Neil says heavier rain is expected to begin in the region on Friday due to another weather system that’s currently moving across northern Quebec. Fiona is forecasted to pass near Bermuda early Friday before reaching Atlantic Canada the next day.

Air Canada has announced they would be waiving change fees for numerous destinations due to the expected stormy weather — among them, Halifax, Fredericton and St John’s.