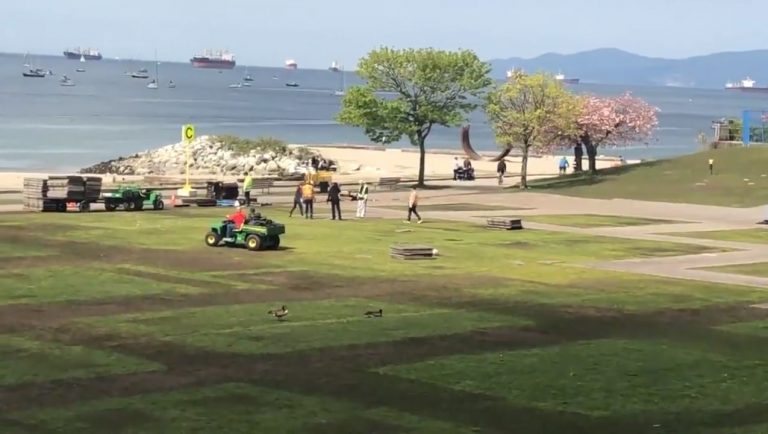 Vancouver’s famous 4/20 cannabis protest and farmer’s market is back this April 20, with new organizers and a return to its original location outside the Vancouver Art Gallery.

The event is being organized thanks to the joint effort of a small group of organizations and entertainment companies, some of whom helped organize the events at Sunset Beach last year.

“It was just a natural evolution of things with the original organizers bowing out that we continue on doing that,” co-organizer Neil Magnusson said.

Dana Larsen and Cannabis Culture have been the primary organizers for 20 years. Their 4/20 Vancouver website says by the time COVID-19 restrictions were lifted, they didn’t leave much time to book performers and put the whole thing together. Larsen wrote on Twitter they normally start planning the event in December, and, at the time, there was no certainty they would be able to host anything.

We normally would start planning for 420 in December, and there was just too much uncertainty at that time about where we'd be in April in regards to public events.
However, another group is working to put on a smaller 420 at the Art Gallery.

The notice on the website’s homepage appeared to lead many to assume nothing is happening this year.

“The first real challenge was where to have it. We thought we should probably have it at Sunset Beach, and continue that tradition, but there was just too many issues to do it at Sunset Beach so we decided to go back to the Art Gallery,” Magnusson said.

He says potential bad weather, mud, a new bike lane along Beach Avenue, the cost of cleanup, and crews staging to remove the stranded barge all led them to change the venue to downtown.

In previous years, the festival has come under fire from the city for destroying the grass at Sunset Beach Park. More than 60,000 people who have attended the event in the past have left garbage, mud holes, and thousands of dollars in damage in their wake.

Councillors including Melissa De Genova and Sarah Kirby-Yung have previously supported motions to recover some of the cleanup costs, and find a different venue for the annual event. Meanwhile Coun. Michael Wiebe has supported the idea of giving the event a permit, thus allowing the city to potentially recoup some of the clean up costs.

Wiebe says he was unaware this year’s event was being organized by new people, but is optimistic this could mean a new relationship with those who put on 4/20.

“This has been years and years. I think we’ve learned a lot from it. and I think we need to be put a little bit more accountability on the organizers and make sure that they are following certain standards,” he said, adding the Art Gallery can be an appropriate venue, but because the event isn’t sanctioned, it could cause problems for traffic flow.

He recognizes city staff have been swamped with event permit requests in light of pandemic restrictions easing, however he says it is also on 4/20 organizers to reach out.

“It would be nice for them to actually apply for a permit. I definitely appreciate the history of 4/20 and that it was in fact a protest and a call to legalize cannabis, and that’s happened,” Coun. Pete Fry said Thursday. “We have now a huge regulatory infrastructure we have corporations that are making a lot of money off cannabis industry. It’s no longer a protest.”

However, event organizers challenge the idea of legalization, and say the event is still very much a protest, albeit of the current framework of legalization.

“This is not the legalization that we’ve been fighting for at all,” he said. “We’re going to have 100 vendors there and they’re all going to be still considered criminals and illegal under so-called legalization. Legalization to us means no penalties for anything to do with cannabis.”

“We are not totally out of COVID yet so I hope that they’re being thoughtful and considerate around COVID transmission, because obviously if you’ve got, a couple 1,000 people passing joints around, you’re participating in some kind of risky behaviour.”

The protest and festival is expected to include vendors, food trucks, and a stage with live performances and speeches.

McArdle says Collective does event management on a regular basis and feels prepared to host the large event.

In true 4/20 fashion, however, the event is not sanctioned by the City of Vancouver.

“The 4/20 event is an unpermitted and unsanctioned event which the organizers are defining as a protest,” the city wrote in an email to CityNews.

Vancouver police confirm they will be in the area, but did not provide further details.

“As with all planned, large scale events, we will be in the area to monitor should any issues/crimes arise,” police wrote in an email.

In 2020, official 4/20 events were moved online to encourage physical distancing during the pandemic. An event did take place at Sunset Beach in 2021 with smaller than usual attendance.

With files from Kier Junos and Angela Bower