The Ukrainian military has claimed a breakthrough in Russian lines near the key port city of Kherson.

Ukraine government spokesperson Oleksiy Arestovych claimed the military had broken through the front lines in several places and had seized villages around Kherson.

But the military is not going into detail on their progress on the southern front, citing operational security.

President Volodymyr Zelenskyy has issued a stark warning to Russian troops in the area.

“If they want to survive, it’s time for Russian soldiers to flee,” he said.

But Russian state media has claimed the Ukrainian operation had failed and suffered heavy losses.

Ukraine has been largely running a defensive operation since Russia invaded the country on February 24.

Kherson was captured in the first week of the war, and is one of the most important ports of the Black Sea.

As the conflict became a war of attrition, Russian forces have been unable to make much territorial progress past the Dnipro River, a broad body of water that bisects Ukraine.

The Ukrainian state broadcaster claimed US-supplied rockets had successfully destroyed three major bridges leading from the western side of the Dnipro into Kherson.

The destruction of the bridges will make it more difficult to resupply Russian troops within the city.

Ferries carrying supplies across the river are also being shelled by Ukrainian forces.

Kherson has an official population of about 300,000, but it is estimated half of those residents have fled since the invasion.

The city sits at the top of a canal supplying drinking water to Crimea, a Ukrainian territory seized by Russia in 2014. 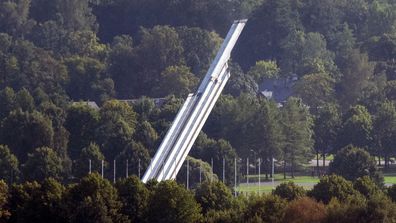 Hated monuments torn down amid backlash against Russia