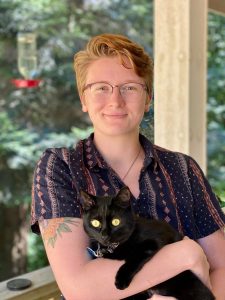 Following an extensive search for rental housing in Metro Vancouver, a UBC student from Washington state is giving up one week before heading back to school.

Instead, Zoë Tapert plans to commute from Bellingham or Ferndale if she can find a place there that will also take her cat.

Tapert has made inquiries about approximately 70 rental listings over a span of three months, and has a budget of $1,700.

“It’s draining,” Tapert said during an interview, saying she has rented in some American cities previously and never encountered a rental market like this, where units are spoken for almost immediately after they are posted.

“You apply for a place, and they tell you, ‘sorry, somebody else already applied, and they’re probably going to get it.’ And you’re like, ‘woah, this is totally foreign.’ I didn’t realize how many people are also in my same exact position. The competition is wild.”

She now faces a daily drive of about an hour and a half, after she relocates from where she’s living now, about an hour north of Seattle.

A contributing factor to the rental affordability crunch is what housing analyst Ben Rabidoux refers to as a “policy mismatch” between the federal government and local governments.

At the federal level, record immigration targets are in place. Universities are accepting record levels of international students. But local governments around the country, including in Metro Vancouver, are not approving housing at a rate in line with the influx of newcomers.

“The issues around the rental market, some of the persistent tightness we’ve seen, this is not a one-issue, quick fix sort of thing,” Rabidoux said.

“It’s a number of issues that have played into it. I’m not here to pretend this one topic is a silver bullet that would fix this. But it is worth highlighting, this dynamic, because it is frankly problematic. We have immigration policies by and large that are set at the federal level…and international students are an important funding source for colleges and universities. They tend to pay higher tuition and they support a lot of the programs that the universities are able to offer.”

“We’ve seen international student admissions skyrocket in recent years. In fact, we’ve seen over 200,000 admissions in the past six months alone, which is a record. Far and away a record. And so it certainly raises the question, if the colleges and universities are benefitting from these revenues, what are they doing to provide adequate housing for these students?”

If local governments do not approve housing at an appropriate rate, during a time of record immigration, Rabidoux says there will be implications for affordability.

“That’s fine if we want to have robust immigration,” Rabidoux said. “I think we need it. But if we’re not delivering the necessary housing, there are very real tradeoffs. One of the tradeoffs is that we’re going to have an artificially tight rental market and an unaffordable resale market.”

Adding an extra twist to Tapert’s story, is that she’s actually heading to UBC for studies in urban planning, and so this whole situation has become an unplanned for additional learning experience that could be relevant to her career at some point.

“UBC and a lot of the other colleges are trying their best in developing housing, it’s just you can’t always build as fast the people are coming in,” Tapert said. “We’re stuck, essentially, in that we’re trying to build housing, but we need it now.”

Tapert’s struggle to find housing ahead of the school year is hardly unique, and plenty of similar stories are being widely shared on social media.

For its part, the university claims it’s doing what it can to provide new housing stock.

“The housing and rental market in Vancouver is a challenge for everyone, including UBC students, staff and faculty,” Andrew Parr, Associate Vice President, Student Housing and Community Services at UBC wrote in a statement.

“The university is making significant investment and is working hard to meet this housing challenge. Since 2011, the university has invested more than $634 million in new student housing developments, adding 5,555 new beds to our campuses. UBC has more on-campus housing than any university in Canada and is among the top student residence providers in North America with more than 15,000 beds on both campuses as of spring 2022. The Vancouver campus has 13,217 beds and the Okanagan campus has 2,120 beds.”