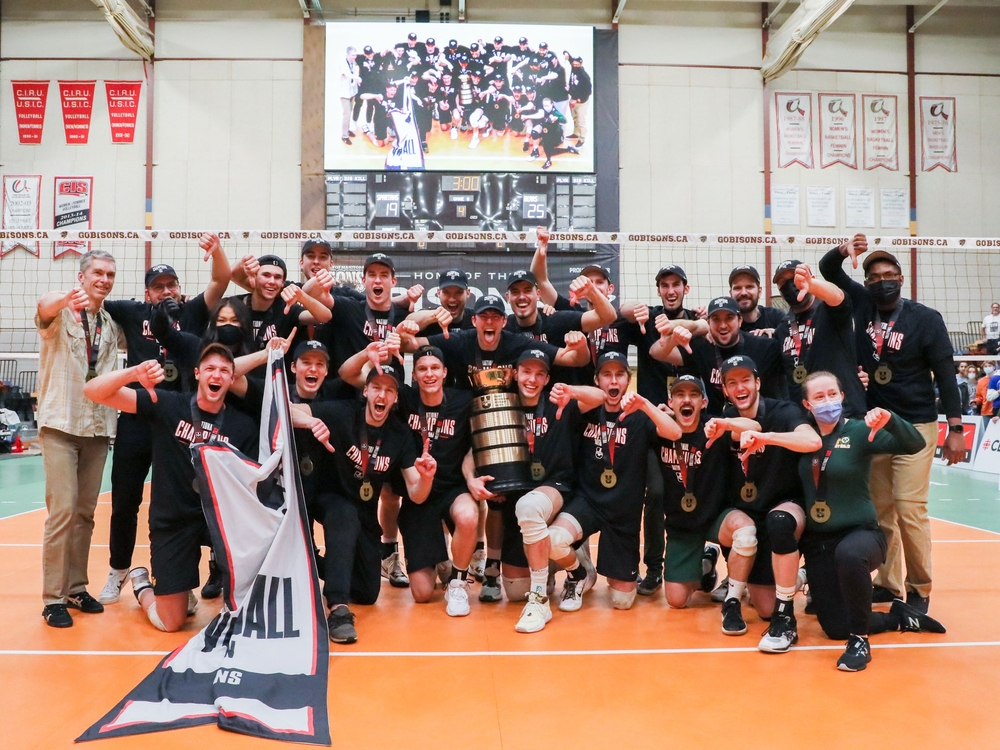 The more things change, the more they stay the same for the University of Alberta Golden Bears, who hoisted their ninth Tantramar trophy in program history Sunday.

It was their first time playing for the men’s national volleyball title since 2017, but their fourth appearance in the last eight seasons, with their last championship coming in 2015.

So, while it all looked mighty familiar for the Canada West Conference silver medalists as they met the best of the best at Winnipeg’s Investors Group Athletic Centre this weekend, there’s been a whole bunch of new to contend with over the past couple years.

Not the least of which was a global pandemic that slammed all sports, and not just in universities, either, as the Golden Bears tried to keep as busy as possible during last year’s cancelled season.

And the year before, the program officially saw the torch passed from long-time head coach Terry Danyluk to his heir apparent, Brock Davidiuk, who pushed the program’s streak of 19 consecutive entries into nationals to an even 20, right before COVID-19 shut the 2020 edition of the tournament down.

Fast-forward to this weekend and the Bears made the most of their first opportunity to actually perform for Davidiuk on the national stage, defeating the Trinity Western University Spartans in four sets in Sunday’s championship final.

“Over COVID, it was pretty special what the group did that put the time in during that year. That was a really challenging year and the guys laid the building blocks of our culture that year for this team.”

And weathered the pandemic storm better than every other Canadian program, going strictly by this weekend’s results.

“This is a really special group and this year, when we were able to play again and battle again, you could really see that come true,” said Davidiuk, whose squad defeated the University of Calgary Dinos in four sets (25-16, 25-23, 10-25, 25-19) in Saturday’s semifinal. “They’re just amazing, amazing people and incredible volleyball players. They’re unbelievably resilient and the mental fortitude the guys showed yesterday when we got blown up by Calgary in that one set to come back so strong the next set was, like, wow.

“This is a pretty special group if we can do that at a national tournament against such a good team. And, sure enough, we knew that Trinity were an incredibly good team, but we knew if we pushed them, that we would be able to take them, and our guys pushed them real hard today and made them real uncomfortable. So, we capitalized on that.”

It was a rematch of this year’s Canada West Conference final, which the Spartans won in four sets.

“They beat us 3-1 in the Canada West final and we beat them 3-1 in the national final,” said Davidiuk, who watched a couple of his big guns misfire in the conference final. “Isaac (Heslinga) was an all-star at this tournament and Jordan (Canham) was MVP, they didn’t play their best in that game. We talked about it, I won’t say the swear word to you, but we’re ‘swear word’ dangerous because we were that close with two of our studs not producing. And those two studs definitely produced tonight.”

Canham had 17 kills, three digs and three aces, while Isaac Heslinga added 13 kills and Max Elgert had 35 assists in the winning effort, while Brodie Hofer had 16 kills and six aces, and Derek Epp added 40 assists for the Spartans, who have medalled in six consecutive U Sports tournaments.

“Jordan was an absolute animal,” Davidiuk said. “Some people talk about rising to the occasion, but I don’t really believe in that. I think Jordan, he’s so, so consistent with everything he does that he was able to just show up and play well in such a big tournament. It was really special to see him play so well this weekend.”

BEAR TRACKS: The U of A Pandas also claimed a medal Sunday, defeating the McGill University Martlets in straight sets (25-8, 25-22, 25-17) in the bronze-medal game at Calgary’s Jack Simpson Gym. Kory White led the Pandas with 13 kills, four blocks and two aces, while Julia Zonneveld had 19 digs to go with 10 kills.