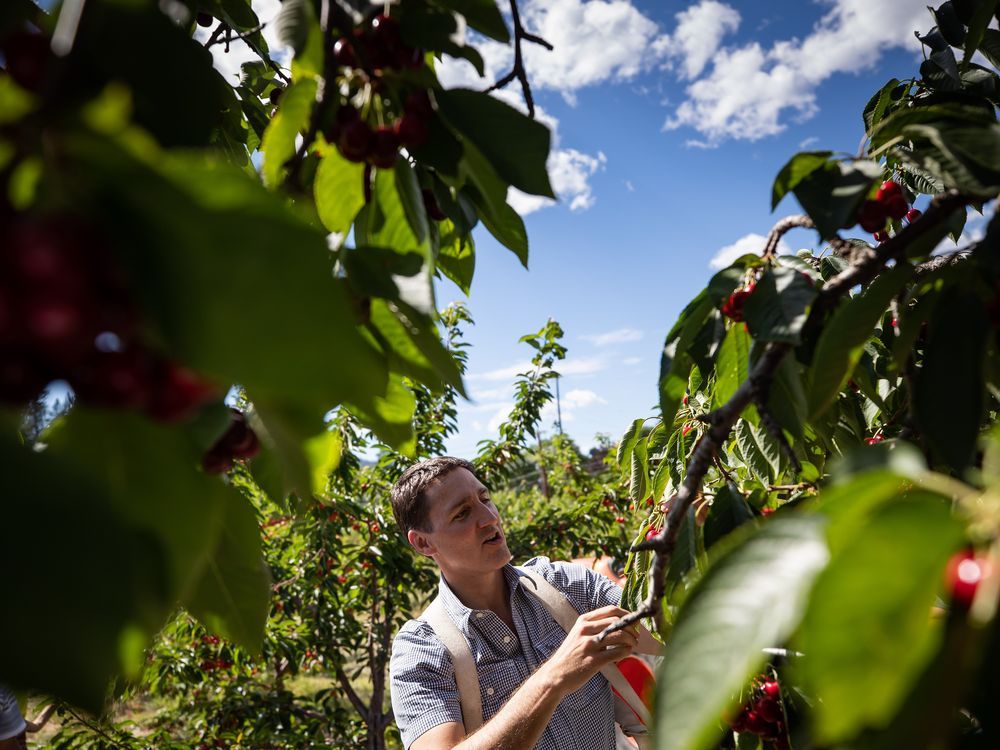 KELOWNA — The prime minister got a first-hand look at how heat and wildfires in British Columbia last year combined with mild temperatures in the earlier months of 2022 have left fruit growers with a lighter than normal crop.

Justin Trudeau stopped at Lutz Orchards in Summerland on Monday as he swung through the province on a summer tour across the country, meeting with workers in different occupations including farmers and growers.

Trudeau asked Derek Lutz, the farm’s owner, how the weather had affected yield and of cherries.

“Last year was really dry so they were small?” he asked about the size of the cherries.

“And this year was really wet so they were overly plump and split?”

The cherry crop is about 30 to 40 per cent lower than what it is in a normal year, and they’re about two weeks behind, Lutz said.

The extreme weather including heat, cold, wind and hail are “definitely concerning,” he noted.

“You know, that’s kind of the new normal. It’s worrying for the future, for sure,” he said. “We’ve definitely got weather issues.”

The prime minister, during his visit to the farm, strapped on a harness and a white bucket, and tried his hand at cherry picking.

Trudeau said he might be able to do about a quarter of the bucket.

As the prime minister tackled a bunch of about 20 cherries, Lutz gave Trudeau a hand by emptying a silver pail of the fruit into his bucket.

“There we go. Aha,” the prime minister said looking down at the fruit. “I had nothing to do with that.”

He continued to pick the ripe, red fruit.

“We gave you a spot that had some nice low-hanging fruit,” Lutz said with laugh.

Earlier in the day, the prime minister made a stop at the B.C. Tree Fruits Cooperative in Kelowna where he learned about sorting and packing of cherries. He also helped with packing a few bags of the fruit.

The co-operative serves up to 400 producers in the province, supporting small farmers with everything from packaging to export of their product to international markets.

Laurel Van Dam, vice-president for the co-operative, said being a fruit grower in the Okanagan Valley has been a “bit of a tough go for the last few years.”

“Mother Nature has really not been kind to our growers.”

Farmers are looking at different technologies including various nutrients and methods of pruning their trees to work with nature and get as much produce as possible, she said.

The capricious weather along with inflation have added to farmers’ mental stress, she noted.