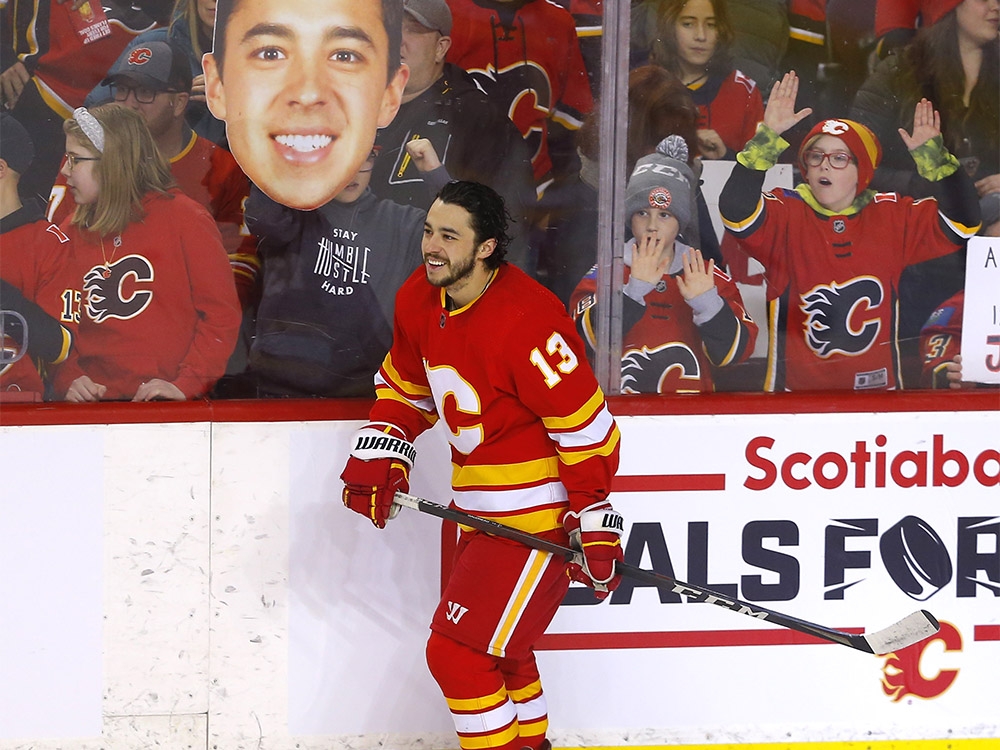 Just hours after his team clinched an invite to the 2022 Stanley Cup playoffs, Calgary Flames general manager Brad Treliving promised to “move heaven and Earth and do everything we possibly can” to ensure this won’t be Johnny Gaudreau’s final season at the Saddledome.

The superstar left-winger is slated to become an unrestricted free agent this summer, and his future was among the topics Saturday during Treliving’s appearance on Hockey Night in Canada’s After Hours segment.

Gaudreau is a big reason that the Flames sit atop the Pacific Division standings. He continued his Hart Trophy crusade with two goals and a pair of assists in a 9-1 rout of the Arizona Coyotes, boosting his season total to 105 points.

He’s tied for third in the leaguewide scoring race.

“We want him back here. We’re going to move heaven and Earth and do everything we possibly can to get Johnny back here,” Treliving said during Saturday’s post-game sitdown on Hockey Night in Canada. “You’ve seen it tonight, you’ve seen it throughout the season, he’s a top player — not only what he’s done in terms of productivity and with the puck this year, but what he’s done without it.

“I remember when Darryl (Sutter) came in last year, the screams were, ‘Oh, Johnny can’t play for Darryl!’ And I remember chuckling because anybody that knows Johnny, he thrives under a coach that’ll push him. He has his whole career.

“We’re going to do everything we humanly possibly can to have him be back here and be a Flame for a long, long time.”

The 28-year-old Gaudreau is the first Flames skater since the early-1990s to pile up 100-plus points in a season. Calgary’s ace playmaker also leads the league with a plus-59 rating. (He is poised to shatter Joe Mullen’s franchise record in that stat category. Mullen posted a plus-54 rating in 1988-89.)

Gaudreau’s current contract comes with an annual salary-cap hit of US$6.75 million. He has undoubtedly earned a hefty raise.

Treliving also needs to find the loot to lock up fellow forwards Andrew Mangiapane and Matthew Tkachuk, both approaching restricted free agency. Mangiapane has sniped a career-high 32 goals, while Tkachuk is now only four points shy of triple digits.

“They’re good players and all of them are homegrown players and players that we’ve seen grow up here,” Treliving said on After Hours. “They’re all deserving of the contracts that they’re going to get. We’re trying to keep our focus right now on everything that’s on the ice.

“It’s hard to make the playoffs in this league. I don’t think people really understand how hard it is so it should be something that they take a lot of pride in tonight, clinching. But we have a journey ahead of us that we’re looking to do more and bigger things and we’ll worry about all those other things, contractually, when the time is right. But certainly, we want to get them all signed.”

Gaudreau, who told reporters during training camp that he didn’t plan to publicly comment on his contract situation throughout the season, certainly seems fine with focusing on what’s happening on the ice.

Next on the Flames’ to-do list is to secure the top seed in the Pacific Division. They are currently seven points up on the second-place Edmonton Oilers, who did them a favour on Saturday afternoon with a victory over the Vegas Golden Knights. That was, in fact, the result that officially sealed the Flames’ playoff berth.

Gaudreau & Co. have seven regular-season dates remaining. They are back in action for Monday’s road meeting with the Chicago Blackhawks (6 p.m. MT, Sportsnet West/Sportsnet 960 The Fan).

“It’s a huge accomplishment for our team,” Gaudreau said after the Flames clinched a return to the post-season. “I’m proud of the guys in the locker-room, but the work starts now and we have to try to put ourselves in a good spot for the rest of the year, maybe try to get home-ice for most of the playoffs if we can, and then get ready for Round 1.”