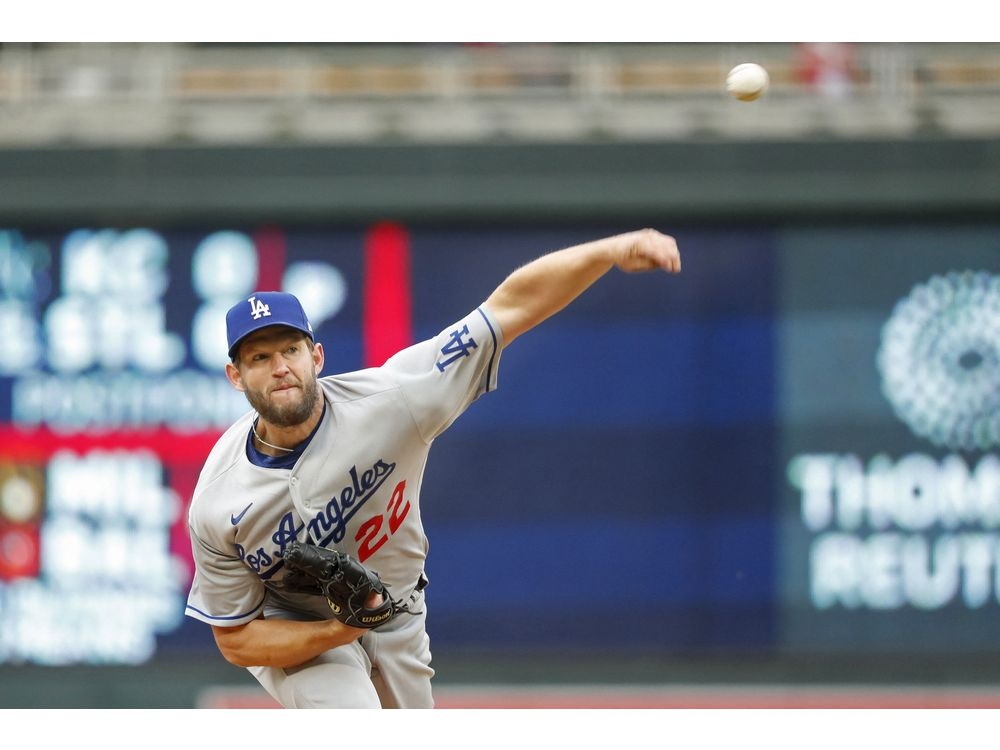 Given the delayed start to training camps everywhere due to abbreviated work stoppage that — fortunately — didn’t do a lot of damage to the 2022 MLB season — pitchers certainly need to be coddled more than usual these days. They’re behind the eight-ball by about a month in getting up to early-season shape.

In a perfect world, that wouldn’t need to happen, though.

Cue Clayton Kershaw and that gem he spun Wednesday afternoon, which was on track to become the 24th perfect game in MLB history.

That is until the chase for the World Series — and with it, the protect-the-pitcher mentality — got in the way.

Despite keeping 21 consecutive Minnesota Twins from reaching base, Kershaw was pulled from the game after seven innings, thwarting him from a shot at rare perfection.

Kershaw, meanwhile? He seemingly towed the party line in the bid to cash in a second World Series in three years.

“We’re here to win,” Kershaw told reporters. “And this is the right choice.”

“As much as I would have wanted to do it, I’ve (only) thrown 75 pitches in a sim game,” continued Kershaw. “I would have loved to stay, but bigger things. I knew going in my pitch count wasn’t going to be 100 let alone 90. It’s a hard thing to do, coming out of a game like that, but like I said, we’re here to win, and this is the right choice.”

We get it … protect the pitcher, especially when the arm is not quite up to the snuff it would be with a regular length spring training under his belt.

But this idea that it was better for Kershaw to disrupt the opportunity for a perfect game? We don’t buy it.

Baseball is all about that kind of history and celebration.

And that would’ve pretty much been the cherry on the top of a hall-of-fame career.

Let the man have his shot at it. Put him in to start at least the eighth inning to see what transpires. One man on, and he’s out of the game. Maybe it’s a three-pitch inning and we’re onto the ninth and just a few pitches away from another piece of Kershaw lore.

But what we do know is that it’s ridiculous to think that you’re jeopardizing a World Series bid by protecting this pitcher, especially since playoffs are still a near full season away.

And particularly because these are the Dodgers — a mighty squad from top to bottom — who don’t ‘need’ a healthy Kershaw to win a World Series.

Imagine, if you will, Kershaw with a World Series ring on one hand and a perfect game in the other.

Since 1901, only two pitchers have been pulled from a perfect game heading into the eighth inning. Both were Dodgers — Rich Hill in 2016, and now Kershaw — and both were at the hands of Roberts. The Dodgers manager also put an end to Ross Stripling no-hitter by taking him out of a game after 7-1/3 innings of work in 2016. C’mon, Coach. We get that the World Series banner is the end-game, but baseball is about the journey, too … Speaking of a journey, check out MLB.com’s ‘The Story of Jackie Robinson’. It’s a quick ride through the great ball player’s life to understand more about why he deserves to be honoured. FYI: Friday was Jackie Robinson Day around the MLB, with everybody sporting a No. 42 jersey to salute him for breaking the baseball colour barrier when he started at first base for the Brooklyn Dodgers on April 15, 1947 … The Cleveland Guardians? Yeah, we’re still tripping over that name, too. Sounds like the name of vigilante street gang from the 1960s or ’70s and not the name of a team in the major leagues. But with an MLB-high 45 runs coming into Friday’s action, it’s certainly working for a club thought to be devoid of much offence outside of 3B Jose Ramirez, who leads all hitters with 14 RBI. Second-best in the runs category — again trippy — are the Oakland Athletics, who many pundits picked to be the worst hitting lineup in baseball. The A’s have crossed the plate a whopping 42 times, with unheralded hitters Seth Brown, Sean Murphy, Chad Pinder, Sheldon Neuse — who? — and — on Friday night — Billy McKinney slotting into the clean-up spot.

Here’s more silliness stemming from this protect-the-pitcher mentality, courtesy of VSiN’s Mike Palm: From 1967-2016, the average number of times in a season that a position player would come on to pitch was less than five. But since 2018, it’s 84 in a year. In the first six days of baseball this season, position players took to the mound four times in first six days of baseball alone. If managers are having troubles fielding enough pitchers, then — as Palm declares — let’s expand the roster … How about even more silliness or — better yet in this case — strangeness in second-bagger Dee Strange-Gordon coming on to pitch for the Washington Nationals on Wednesday night? Down 16-4, Strange-Gordon hit the hill in the eighth inning and threw a pitch to Atlanta Braves slugger Matt Olson that clocked in at 34 mph — the slowest ever recorded pitch in National League history … Hey, Twins fans! Guess who’s out with injury again. That’s right, Byron Buxton, who can’t ever stay healthy. Here’s Buxton’s injury history from MLB.com: “Buxton was kept off the field for much of last season by a fractured left hand due to a hit-by-pitch and a right hip strain sustained while running the bases. Recurring left shoulder issues due to a collision with the outfield wall in Miami cost him chunks of ’19 and ’20, and a mixture of groin, thumb, big toe, migraine and wrist issues allowed him to play more than 92 games in only one of his seven big league seasons entering ’22.’ An awkward slide into second base Friday morning against the Boston Red Sox forced him out with knee soreness … Our knees are sore just thinking about it — or is that just an age thing? Either way, we’re outta here!