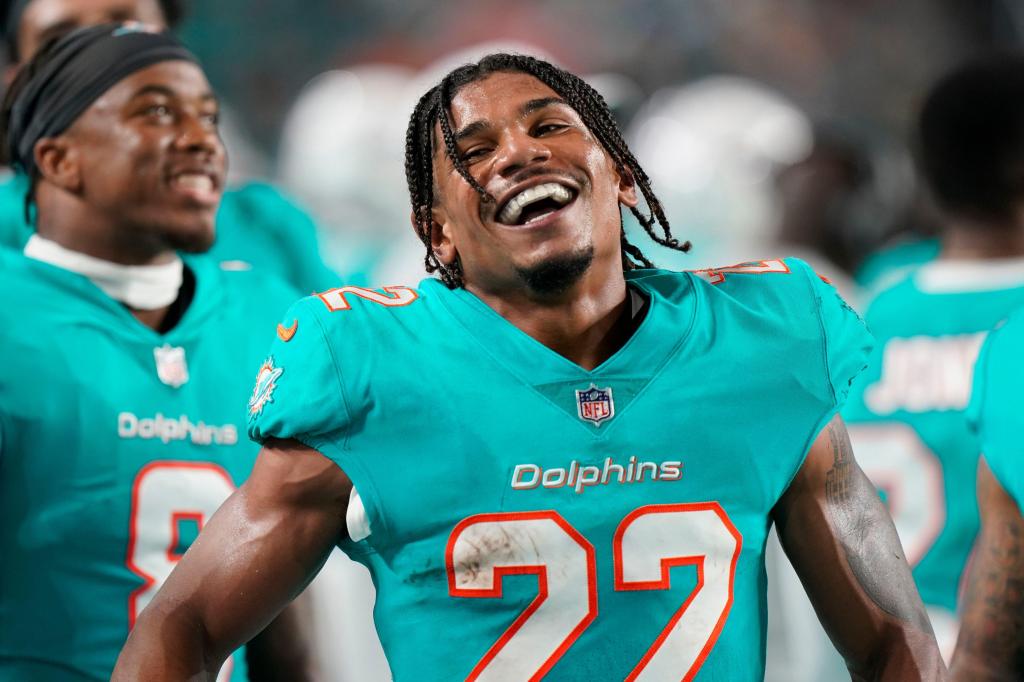 The Miami Dolphins concluded their three-game preseason slate with a dominant 48-10 victory over the Philadelphia Eagles that both showed what the team’s top units can look like and saw several players battling for roster spots come through.

“We got better every game,” McDaniel said, summarizing the exhibition season.

Dolphins general manager Chris Grier and coach Mike McDaniel are having several conversations leading up to Tuesday’s 4 p.m. deadline to get down to a 53-man active roster.

“You hope to have these tough decisions,” McDaniel said ahead of Tuesday 4 p.m. deadline for cuts to 53. “[Saturday] did make it tougher. … Most players put their best foot forward. That is a good problem to have.”

The Dolphins brass will make their choices amid a somber mood at team facilities upon learning senior vice president of communications and community affairs, Jason Jenkins, a fixture across South Florida communities for his charitable efforts, died on Saturday.

Here’s what we learned from the Dolphins’ preseason game against the Eagles and final week of training camp, which also involved a canceled Thursday joint practice with Philadelphia due to a stomach bug going around the team:

Tua will be finding Tyreek often

In their first two plays on the field together in a game, Dolphins quarterback Tua Tagovailoa connected with Tyreek Hill for a 51-yard pass deep over the middle and then for another 13-yard gain on a crossing pattern. It was just a taste of how often this duo will be hooking up, and Tagovailoa didn’t even have Jaylen Waddle available in the preseason finale. Tagovailoa went on to post a perfect passer rating over three scoring drives for 17 points.

“He has made it tough, hasn’t he?” McDaniel said after the rookie quarterback and seventh-round pick had another standout performance on Saturday, throwing for three touchdowns on a 7-of-10 night for 103 yards. McDaniel called it “tricky” for whether the Dolphins would be able to keep Thompson on the practice squad if not on the active roster, so Miami may just need to use a spot on the 53 for him if the team plans to hold on to the signal-caller that’s opening eyes around league circles. Beyond putting up numbers against backup defenders, Thompson has shown command of the offense.

The run game is alive

Not counting the final three kneel-downs he Dolphins went for 6.4 yards per carry in what could be a truer look of what the new run game, minus Chase Edmonds, will look like than the previous two weeks. Raheem Mostert, Myles Gaskin, Salvon Ahmed, Gerrid Doaks and ZaQuandre White were all above 6 yards per rush as it didn’t matter which tailback was in. Sony Michel went for 15 yards on five carries but did have the short-yardage touchdown. Running back will be one of the most difficult position groups for McDaniel and Grier to make final decisions on.

Veteran edge help on the way

The Dolphins reportedly reached an agreement with veteran edge defender Trey Flowers on Sunday after working him out this past week, but neither McDaniel nor the team confirmed the news as of Sunday evening. The addition comes at a time when outside linebacker Andrew Van Ginkel is unavailable after an appendix removal. Brennan Scarlett, a member of the active roster last year, has also missed recent weeks of practice with an undisclosed injury. Bringing in Flowers could also affect the status of players like Porter Gustin, Darius Hodge or Cameron Goode, who were fighting for roster spots.

McDaniel called it “fluid” on Sunday regarding whether starting cornerback Byron Jones will be removed from the physically-unable-to-perform list by the 53-man roster deadline. If he’s not ready to return, Jones could miss the first four weeks of the season. Also on the cornerback front, it was good for undrafted rookie Kader Kohou to get a start as the nickel with Nik Needham and Noah Igbinoghene on the boundary. This seems to bode well for Kohou to make the roster ahead of Tuesday.

Campbell with a roster-clinching play?

Safety Elijah Campbell was just thinking “don’t drop it” when the Reid Sinnett pass was coming his way. He intercepted the pass and returned it 30 yards for a touchdown. Making the play that was gift-wrapped for him could seal his spot on the roster after also intercepting a pass in the preseason opener, being a viable special teams option and a versatile defensive back that could play safety or cornerback. Also worth noting defensively: Defensive tackle Zach Sieler is a monster stopping short-yardage runs, as seen on that fourth-and-1 stuff, but you already knew that.

Bowden up, Williams down

Lynn Bowden made the most of his one target, taking the short reception 39 yards for a touchdown. He added to his impressive preseason, which also saw him score a touchdown two weeks prior against the Buccaneers. Preston Williams, on the other hand, was once again not heard from in the passing game, and he muffed a punt return as his job is in serious jeopardy heading into Tuesday. Another notable among receivers: River Cracraft was targeted heavily, seven times for four receptions, 54 yards and a touchdown.

Backup offensive tackle Greg Little returned from injury the past two weeks and appeared fine as he stepped in for resting left tackle Terron Armstead. “You wouldn’t have thought that he was progressing through an injury,” McDaniel said of Little’s play over 40 offensive snaps. It may have been enough to secure Little a reserve lineman spot, possibly over Larnel Coleman, who was in that spot for Armstead the previous two weeks.

You know what Mike Gesicki and Durham Smythe do well, although Gesicki still has to grow in being asked to do different things in this offense. The next two tight ends, Hunter Long and Cethan Carter, both scored short touchdowns near a pylon Saturday on throws from Thompson. Carter has also been seen throughout the preseason working the fullback/H-back role, which means he can provide Alec Ingold a backup there.

Jason Jenkins will be missed

There has been an outpouring of thoughts, prayers and memories shared following the Dolphins’ loss of a loved member of the organization on Saturday. In addition to leading a top-notch communications department, Jenkins was the head of much of the Dolphins’ charitable work in the community. As team executives, players and coaches honored his life between Saturday night and Sunday, Jenkins’ far-reaching impact was felt across the NFL with a moment of silence even held at the MetLife Stadium press box ahead of the Giants-Jets preseason game.