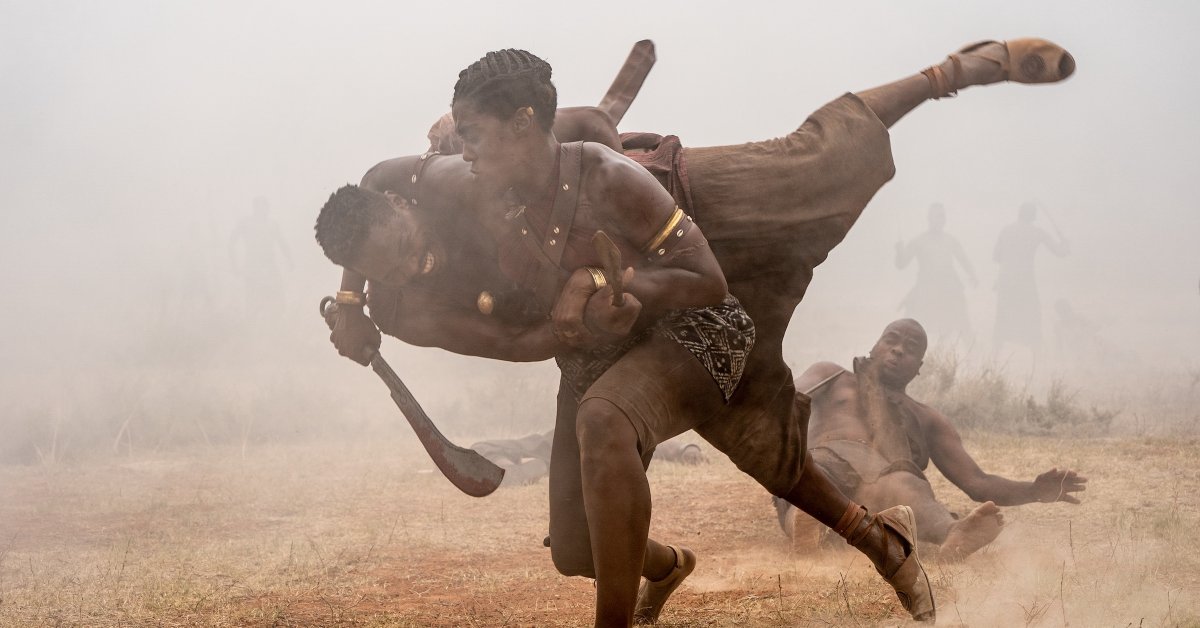 General Nanisca, played by an imposing Viola Davis, rises slowly out of a bed of tall grass in the dead of night. Behind her, an entire army materializes silently out of the grass, each member poised with a weapon in hand.

When we meet them onscreen, the Agojie—a group of women warriors who fought for the kingdom of Dahomey—are inconspicuous, keeping a low profile. But in 19th century West Africa, at the height of their power, their reputation preceded them: fierce, strong, unparalleled.

The Woman King, the historical epic from Gina Prince-Bythewood out Sept. 16, chronicles the trials and triumphs of the Agojie and Dahomey (a region in present-day Benin). Leonard Wantchekon, a professor of politics and international affairs at Princeton University, was also a historical advisor on the film. He’s finishing up a book containing biographies of more than 50 of the Agojie, based on interviews with their descendants and communities.

“I think it’s something which even today would be considered revolutionary,” Wantchekon says of the women warriors. “Because all the training that it took, all the preparation it took, it’s actually something that happened. It’s not made up.”

While the Agojie are very much real—they existed for over a century—they also have inspired plenty of interpretations in pop culture, perhaps most notably the Dora Milaje in Black Panther. The all-female special forces for the fictional African nation of Wakanda first appeared in Marvel comic books, but migrated onscreen in 2018, where they played an integral role. (The sequel, Black Panther: Wakanda Forever, appears to focus even more closely on the women of Wakanda.)

Prince-Bythewood has credited Black Panther with helping to pave the way for this film—especially in an industry in which the stories of people of color have not always been prioritized by studios. But The Woman King marks the first time that a major motion picture in the U.S. has told the story of the Agojie. It also addresses the role that Dahomey played in the slave trade—although it glosses over the fact that the king at the time only temporarily paused the kingdom’s participation in 1852.

The conditions that led to the rise of the Agojie

Wantchekon, the historical advisor, is from Benin, and was born a mile away from the former palace of King Glele, the son of King Ghezo, the ruling monarch in The Woman King (played by John Boyega.) In the movie, King Ghezo and General Nanisca have a unique rapport: she is, essentially, his right-hand woman, and advises him closely on military tactics.

“I believe in the movie that Dahomey is presented as a highly, highly sophisticated state in a modern sense: with a standing army, with bureaucracy, with officials in charge of logistics,” Wantchekon says. “It’s not very surprising that something that extraordinary, like these female warriors, arose from these institutions.”

As a historical advisor, Wantchekon made sure that Dahomey was portrayed as a developed, sovereign state—rather than a stereotypical primitive tribe. The weapons that the Agojie and their male counterparts used, for instance, were often produced locally—certainly not all imported from Europe. In one scene, Nawi (Thuso Mbedu), a new recruit, goes to the river to find the perfect rock with which to sharpen her sword.

The Agojie, of course, did not exist in a vacuum. Much of Wantchekon’s research focuses on the social and political conditions within Dahomey that allowed for the rise of the elite women warriors. “You might see those institutions of women in isolation, as if it came from the sky or somewhere,” Wantchekon says. “But they are products of a social environment that enables women to do anything they want to do or they can do—including going to war.”

The sheer existence of the Agojie was an anomaly: European visitors referred to them as the Dahomey Amazons in reference to the all-female Amazon warriors of Greek mythology. Wantchekon makes three key points about the conditions that made Dahomey ripe for the Agojie to thrive.

First, the actual origins of the Dahomey Amazons are cloudy, although the first recorded mention of them dates back to 1729. One theory suggests that the Agojie began as a dedicated group of elephant hunters. Wantchekon posits, though, that Queen Hangbe, the twin sister of King Akaba, planted the seed for the idea of the women warriors in the early 1700s.

Viola Davis as General Nanisca in ‘The Woman King’

Second, Wantchekon himself observed progressive gender roles in the region: Growing up in Benin, he noticed gender equality all around him, from children playing together at a young age to mixed-gender cultural groups to women’s involvement in economic activities. Those inclusive gender norms date back at least as far as the Dahomey.

And third, King Ghezo catalyzed the expansion of military might. “The idea was there, the social conditions were in place, but then he led the way—King Ghezo—to raise this to the highest level in terms of organization, number of people involved,” Wantchekon says. “Roughly anywhere from one-third to 40% of the whole army [was] made of women.” (At its peak, the Agojie included as many as 6,000 members.)

Read more: The 52 Most Anticipated Movies of Fall 2022

The role slavery played in the Dahomey Kingdom

But the Agojie—and the Dahomey—are not without complexity. In The Woman King, Nanisca experiences firsthand the horrors of slavery, and works to convince King Ghezo to stop participating in the slave trade—or at least to end the tributary status of the Dahomey to the Oyo Empire. But, as the investigative journalist Nikole Hannah-Jones pointed out on Twitter before the movie came out, the Dahomey did derive some of their wealth from participating in the slave trade.

“When I came aboard, those were some of the first conversations,” Prince-Bythewood told The Hollywood Reporter. “But it was, ‘We’re going to tell the truth. We’re not going to shy away from anything.’ But also we’re telling a part of the story which is about overcoming and fighting for what’s right. And I think we got it right.”

The Woman King opens in 1823, the year that King Ghezo finally freed Dahomey from its tributary status. Although the movie acknowledges that Dahomey does participate in the slave trade at the time, Nanisca is resolved to completely end the kingdom’s involvement—a concern she brings directly to the king, who seems to agree—a milestone that did not actually happen until decades later.

Viola Davis and Thuso Mbedu are warriors in ‘The Woman King’

“Five percent of slave exports come from Dahomey,” Wantchekon says. It’s a “massive” number of human lives, he says, out of the total number, across Africa, of roughly 12.5 million people enslaved.

The professor acknowledges that the involvement of the Dahomey Kingdom in the slave trade—and the existence of the trade itself—was a tragedy. He also acknowledges that multiple facets can be true, and highlighted, at the same time: a society can be forward-thinking and advanced in one regard while causing immeasurable harm in another.

When European history is discussed, he points out, scholars acknowledge the continent’s heavy involvement in the slave trade (or at least, they are starting to do so more now), and simultaneously recognize the contributions that each nation made to the world. Neither existed without the other.

“There will always be time to consume the legacy of Dahomey and the slave trade,” Wantchekon says. “But also at the same time, like you do for any other continent, any other country, we also need to talk about things that they did independent of this—because those women were not slave raiders.”