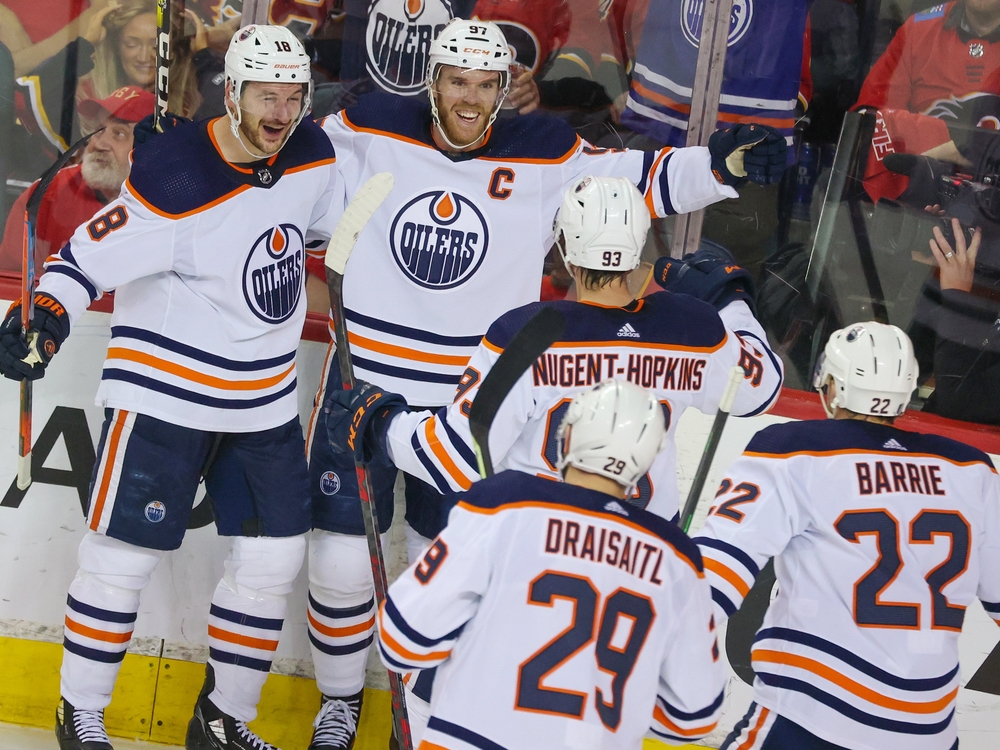 And let’s never have to wait 31 years between Stanley Cup Battles of Alberta ever, ever again.

It wasn’t Theo Fleury scoring in overtime in Game 6.

It wasn’t Esa Tikkanen scoring in overtime in Game 7.

But it was wonderful.

Considering everything else involved, Connor McDavid scoring in overtime in Game 5 to send the Edmonton Oilers to the Western Conference Final for the 10th time in their history, with a chance to advance to the Stanley Cup Final for the eighth time, ranked right up there.

Considering the 11-year Decade of Darkness that preceded it, it has to be considered just as special as the first time.

While it was considered impossible in today’s style of hockey to replicate the five previous Battles of Alberta, dammed if it didn’t.

And damned if this team that now has a 5-1 record in the Stanley Cup BOA series, didn’t prove plenty.

And damn if you don’t have to give them a chance going forward.

In these 12 post-season games in the first official year of the ‘McDavid-Draisaitl Stanley Cup Window’ being officially open, these Oilers proved they’ve learned enough lessons to be considered legit as they prepare to hang the Pacific Division banner in Rogers Place with all those others earned in the old building at Northlands.

The Oilers still have plenty to prove going forward, including that they can win a Game 1 that they’ve now failed to do in all four series in the last three years.

But, hey, they finally won one in overtime and that’s a recent first.

Edmonton lost three OT games getting swept in the first round by the Winnipeg Jets last year.

Says Connor McDavid: “I think our group has been through a lot this year and in years past. I think t has just made us hungrier and hungrier to be successful. We’ve had to learn a lot of lessons along the way and it’s got us to this point. And obviously, we want to keep going here.”

So this group won’t be bathing in champagne and expecting their parade on Monday.

But thanks to the St. Louis Blues overtime win over the Colorado Avalanche Wednesday to extend that series to a Game 6 Friday, the Jay Woodcroft-coached club has more than “10 minutes to enjoy this.”

They’re going to need it.

“It was real fun,” said McDavid. “And the fans were amazing in both buildings, especially in Edmonton. Just the energy and the vibe around the city has been amazing.”

And you get the idea with the celebrations around the city after the win Thursday that the Oilers haven’t seen anything yet.

While it didn’t go six or seven games, it was exceptionally entertaining, with wild and crazy stuff from a 15-goal Game 1 to a Stanley Cup record four goals in 1:11 in Game 5. The five-game series featured 45 goals. Mike Smith got the hook in Game 1 after giving up three goals in six minutes and in Game 4, he gave up a goal on a shot from 132 feet away but he won the goaltending duel with Jacob Markstrom.

It may not have been classic hockey but it was unforgettable, entertaining hockey. And funny the way it worked out.

McDavid told the national television audience while still on the ice after the handshakes: “I was bad all night.”

But No. 97 was indeed next level great throughout two playoff series to put his name with those of Glenn Anderson, Tikkanen, Craig MacTavish and Todd Marchant to score a series-winning goal in overtime. And it was perfect that the goal was set up by Leon Draisaitl.

McDavid produced multiple points in 10 of the previous 11 playoff games but had been held off the sheet in this one until he scored the OT winner.

Draisaitl had four assists Thursday for an NHL record fifth consecutive playoff game producing three or more points. He had 17 points in the Battle of Alberta and is tied with McDavid with an NHL-high 26 points.

Edmonton’s best players have been their best players with Zach Hyman (scoring in all five games), Evander Kane (12 goals in 12 games) and Ryan Nugent-Hopkins (two goals in Game 4 and first-rate in several areas) all contributing.

And there seems to be a real bond developing between the players on the team and the town.

Said Woodcroft: “We’re proud of our history. We’re proud of the Hall of Fame people that have come through our organization. But our team wants to contribute to that history. Our team is looking to make its own mark.”