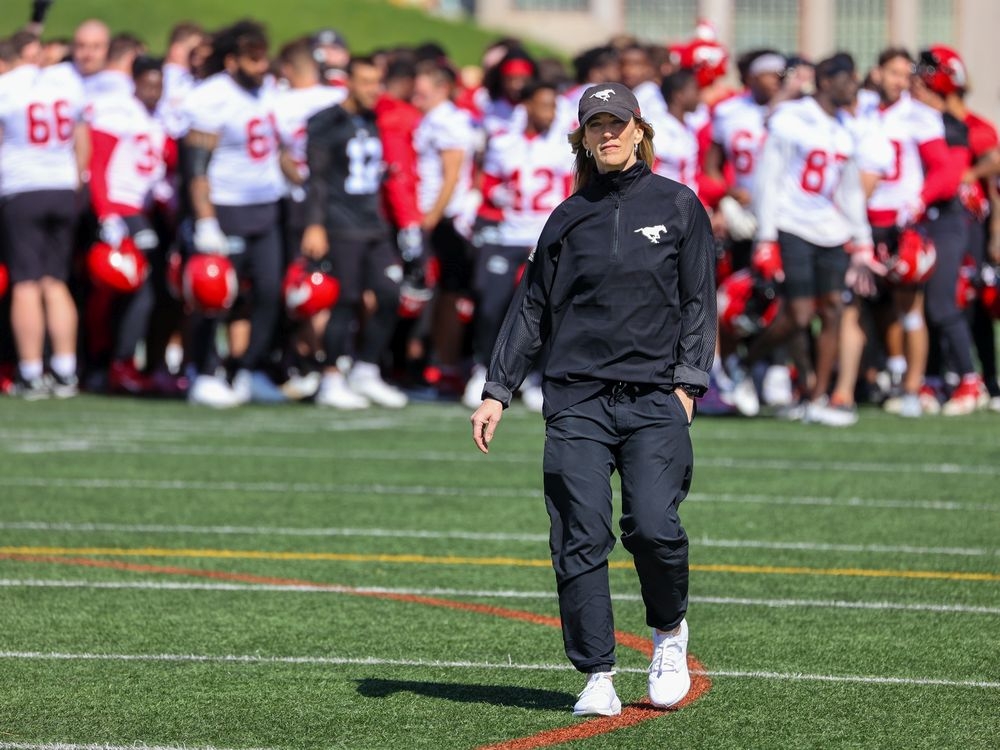 Tara McNeil has always been ahead of the football curve.

So it seems a no-brainer to give her the first shot at perhaps joining the coaching staff of the Calgary Stampeders.

That is if it’s something she wants down the line, thanks to the Women In Football Program put in motion by the CFL and KPMG LLP.

“It’s a huge blessing,” said the 53-year-old McNeil, a longtime sports physiologist turned guest coach for the duration of Stampeders training camp. “This opportunity never existed for me. This was not even a thought in my plans.

“This is surreal. A month or so ago, I was holed up in my house on the computer trying to figure out what my supervisor wanted me to understand about swimming science. So I’m kind of gobsmacked.”

In embracing this initiative, Stamps head coach Dave Dickenson called up McNeil to offer her this opportunity.

And she accepted to become one of nine women welcomed by CFL clubs to join the respective football operations or business administration departments for a four-week development chance that began with the start of camps.

“I have had the blessing of supporting football athletes and coaches in my career,” McNeil said. “But the opportunity for a woman to even explore coaching football at this level was previously not only inaccessible to me but considered an outright crazy idea.

“They’re offering a mentorship program afterward. And the goal is to have us hired full-time in the CFL by the end of it.”

That’s music to the ears of Molly Campbell, the Stamps’ director of football administration.

“I think this whole program that they have to bring women in is a big deal,” said Campbell, the daughter of legendary CFLer Hugh Campbell. “It does a lot to letting younger women know there’s a chance for them in the future to get into this league.”

Campbell herself began as a do-it-all media type for the Edmonton Eskimos long before joining the Stampeders in that same capacity in 2013. Five years later, she was elevated to her current post.

Meanwhile, the BC Lions hired Tanya Walter as a defensive assistant back in February, making her the CFL’s first full-time female coach.

“As long as you’re qualified to be here, they will treat you with respect,” said the 45-year-old Campbell. “It doesn’t matter what your gender is. Women have come a long way over the last several years, and guys are getting used to having females around.”

And so the apprenticeship is on for McNeil at McMahon Stadium.

She brings more than 25 years of experience in the field of exercise science to the Stampeders and is providing assistance with strength and conditioning during her time with the club.

“We are excited to have Tara in the organization,” Dickenson said. “She has tremendous expertise and experience in the area of strength and conditioning, and I believe she will help our players improve their performance. Women In Football is an exciting program with tremendous potential to be mutually beneficial for both Tara and our team.”

“It’s an opportunity to learn to support these guys and shadow the coaches and understand the game a bit more from the inside out,” McNeil said. “I think the experience of just learning these coaches — like what matters to them, and how they see the sport, and where the gaps are that they need supporting with respect to conditioning and where do players need support this year after COVID. There’s a lot of them coming in after disruptive seasons and disruption in their training, so there’s gaps I can help fill with that.

“I have no expectations except to truly learn and maybe eventually pursue a career in this again.”

McNeil is the president and founder of Red Horse Performance Consulting, and through her association with organizations including WinSport, Bobsleigh Canada Skeleton, the Canadian Luge Association and the Canadian Sport Institute, she has assisted in the development of many world-class amateur athletes during her career.

And at one time, she was in the game, having worked with numerous professional athletes, including members of the Stampeders.

“I worked in football in 1994,” McNeil said. “I helped the players get them bigger and helped them move faster. So I feel at home here. It’s very comfortable for me.

“I’ve spent a lot of time working as a sports physiologist in performance strategy, helping coaches make their players fitter, faster and trying to get athletes to stay in sport longer. I was also solving adaptation issues — that’s when somebody is not adapting to training, I come in and fix that. So I was just thinking about spending the rest of my career really researching and improving training methodologies.”

But now this opportunity is afoot.

“This is a very exciting and ground-breaking time in sport, so to be provided with this unique experience is an unexpected gift,” McNeil added. “I am still processing it, but I really look forward to learning from the Stamps and discovering what this journey could offer.”