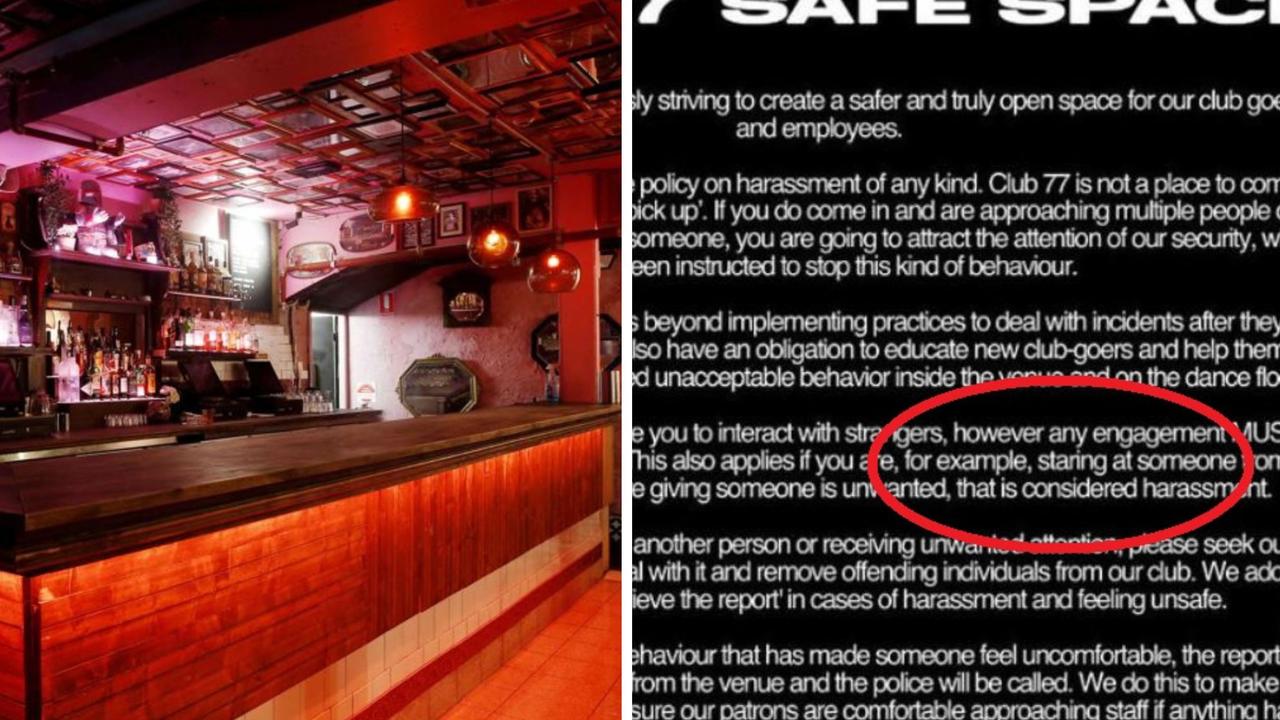 A Sydney nightclub has banned staring unless the person doing the staring gets the prior consent of the person they are staring at to continue staring.

A failure to do so could result in the police being called.

It also discouraged people from coming if their “sole purpose” was to meet someone to “pick up”.

Club 77 in Darlinghurst, in Sydney’s inner east, gave staring as an example of an action that would be in contravention of its new safety and harassment policy.

In an Instagram post from earlier this month, the club said “safety officers” in pink vests would enforce the staring rules.

Staring and picking up

Club 77 said it wanted to remain a “safe space” and so had updated its rules because it had recently, “attracted some people who do not share our values and ethics when it comes to club culture”.

“Creating a safe space goes beyond implementing practices to deal with incidents after they have happened.

“We also have an obligation to educate new club-goers and help them understand what is considered unacceptable behaviour inside the venue and on the dance floor.”

In its policy the venue stated that “Club 77 is not a place to come to if your sole purpose is to ‘pick up’”.

It added that if, “you do come in and are approaching multiple people or giving unwanted attention to someone, you are going to attract the attention of our security, who have been instructed to stop this kind of behaviour”.

The venue’s policy, first reported by The Daily Telegraph, said it encouraged people to “interact with strangers” but “any engagement MUST begin with verbal consent”.

Staring was highlighted as one form of harassment.

Where the line was between innocently trying to make eye contact and staring was not fully explained.

But it was suggested that simply if the person being glanced at took offence, the clubber looking in their direction could be kicked out.

“If you are, for example, staring at someone from afar – if the attention you are giving someone is unwanted, that is considered harassment.

“If you’re being harassed by another person or receiving unwanted attention, please seek them out or tell our staff immediately.

“We adopt a policy of ‘always believe the report’ in cases of harassment and feeling unsafe.

“If we receive reports of any behaviour that has made someone feel uncomfortable, the reported individual will be removed from the venue and the police will be called,” the policy sated.

Those who replied to the post on social media largely gave it their support.

“Amazing!!! Positive party culture all the way!” said another.

Club co-owner Dan Gorrel told TheDaily Telegraph no one had been ejected from the club for staring as of yet, but he wanted to lay the ground rules as the club was becoming increasingly popular with young people.

“Someone could stare at someone and make them feel uncomfortable, they could be staring at them for quite some time.

“People want to go out, they want to feel safe, they don’t want people chasing after them, the response to it has been extremely positive.”