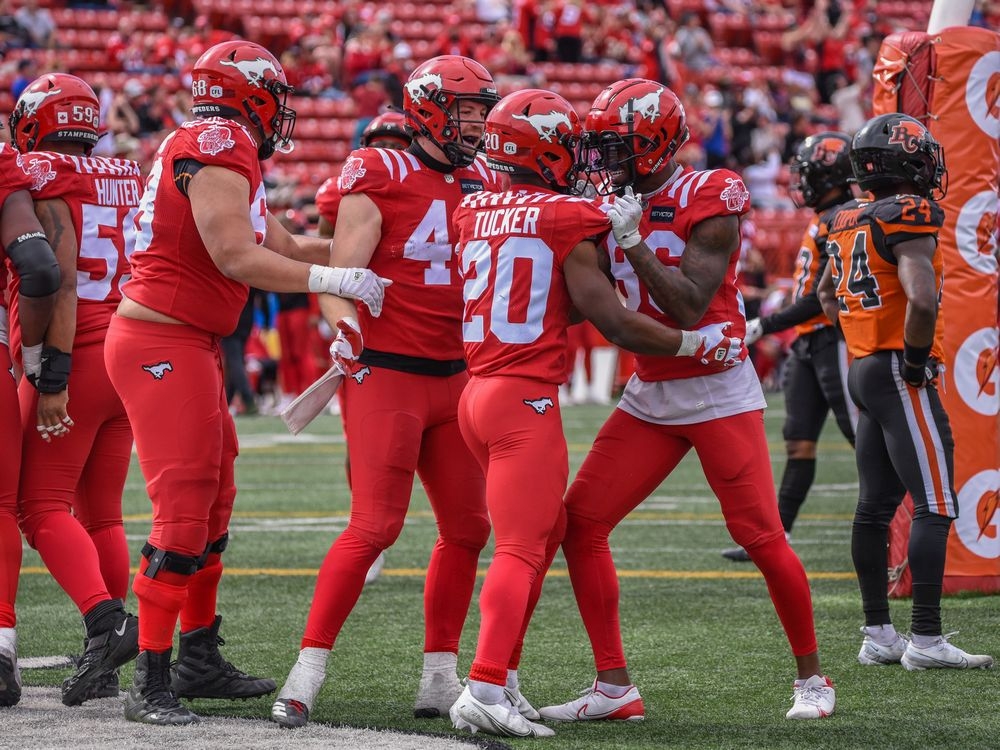 Special teams seem to have picked up this spring where they left off for the Calgary Stampeders last year.

At the very least, they looked Saturday like they did through most of the 2021 CFL regular season.

Sharp, solid and difference-makers in the 41-6 pre-season victory over the visiting BC Lions.

“We were good for all of last year minus one game — the West semifinal,” said Stampeders head coach Dave Dickenson, reflecting on the low spot last year for the unit in a playoff loss to the Saskatchewan Roughriders that eliminated his club from the hunt for the Grey Cup. “We just weren’t ourselves. We didn’t play like ourselves.

“We want redemption. That group is a good group.”

It was great — and then some — Saturday afternoon at McMahon Stadium.

A punt-return touchdown, a punt block and perfection from the kicker highlighted the day for the Stamps special teams in the triumph.

“I thought they showed up and did a good job,” said Stamps special-teams coordinator Mark Kilam. “You can start with the specialists’ play. I thought (punter) Cody Grace was in mid-season form — he hit a variety of balls, which was good. We got both our long-snappers work — Aaron Crawford and (fullback) Tom Schnitzler — and they both did a nice job. And then (kicker) Keiran Burnham, who we invested a year in and he showed up this spring stronger and more dialled — he was 2-for-2 (on field goals) and 5-for-5 (on converts) and averaged 70 yards a kickoff. So that was a good day from the specialists.”

Of course, Shawn Bane Jr. stood out in the second quarter, breaking a punt runback 74 yards for a touchdown, helped by a big block downfield from fellow hands-man Tre Odoms-Dukes.

“Shawn has shown it last year and all throughout camp,” said Stamps QB Bo Levi Mitchell. “Him and Malik (Henry) are always fighting to be the big-play guy, but they’ve both got it — they’ve both got the speed and the wherewithal to hit it. And I think that’s the hardest thing on punt returns — you see a lot of guys that catch the ball and they stop their feet and look around. Shawn and Malik, they go vertical right now, and that’s what Kilam always preaches. So to watch that was great.

“Not only that, but a big thing was watching Tre just lead-blocking for him. I know he was just cleaning up the punter, but still, it’s big to have someone there to do that so we can walk in the end zone.”

Until then, points were seemingly hard to come by in what was a slim 6-0 Stamps advantage.

“We needed a spark, and we got one on special teams,” Dickenson said. “That was the play that kind of set us up for the rest of the game.

“We’ve got big bodies. We’re fast. We’re well coached, so I was glad to see them be our spark plug. Every play starts with special-teams play. They need to be the spark that kind of gets that engine going, and I thought they did that for us.”

For his part, Bane Jr. lauded his blocker for the run to paydirt.

“I told Tre that, man — shout out to him,” said Bane Jr. “Thank God he knocked him on the ground because I didn’t want to cut back. I definitely gave him his props.

“I stole Peyton (Logan)’s rep (on the runback). I guess it paid off. He’s a rookie, and he’s learning, so I was like, ‘I might as well take this one.’ It was right before the half, and I knew I wasn’t going to get any more next half, so I just took it.”

The other standout special-teams play came when Brad Cowan busted in to block a punt in the third quarter that put the ball on the Lions’ four-yard line and saw QB Tommy Stevens sneak in two plays later for the Stamps.

Kilam added that Canadian linebacker Cowan was also “physical, moving people and making tackles upfield. Plus some of our younger defensive backs showed up — Darius Williams had a couple of nice kickoff covers. And the receiver group blocked well.”

Bane Jr. wasn’t the only returner getting praise from Kilam.

“All our returners caught the ball, too, drawing three no-yards calls,” said the special-teams boss. “They did a nice job of fielding the short punts.”

All in all, it was a star-studded day for the special-teamers, lending to what the Stamps feel should be strong units when the season opens June 9.

“It is a good group of guys — and that’s first and foremost,” added Kilam. “Tough, tough battles all over the place, but that’s a good thing. That means when the team’s finally made and we have to cut some good players, the team should be good.

“But they set the standard (Saturday), so that’s what it is. It’s a high one, and we’re not going to go back on it.”

The Stamps made a handful of cuts Sunday in the wake of the pre-season victory. Global receiver Andres Salgado and Canadian lineman Alain Pae were among the released players. Four Americans — receiver Jordan Williams-Lambert, linebacker Tray Matthews and defensive backs Javien Hamilton and Natrell Jamerson — rounded out the release … American DB Javien Elliott has been placed on the Stamps six-game injury list after tweaking his groin during Saturday’s game … Next up for the Stamps for final evaluations is the second — and final — pre-season game next Friday night against the host Edmonton Elks at Commonwealth Stadium (7 p.m.).