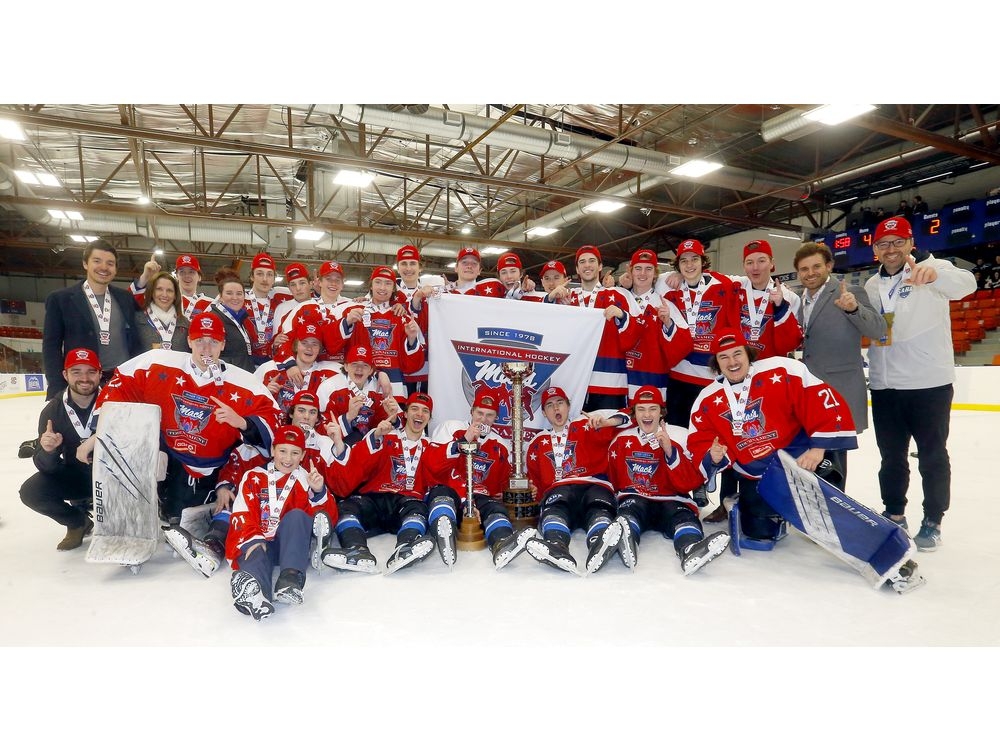 It was an historic return of The Mac’s to the city after a two-year-plus hiatus.

And that was made even more historic by the first-ever title-take by a Canadian Sports School Hockey League entry.

The South Alberta Hockey Academy triumphed Sunday over the Vancouver NE Chiefs to win the 2022 Mac’s International Hockey Tournament to cap the only springtime occasion of the much-heralded under-18 event held — almost — annually in Calgary.

This 43rd edition of The Mac’s was rebooted from its regularly scheduled time slot at Christmas after COVID scrapped it for a second straight year.

“It was definitely a little weird to be doing this in April, but I’m glad we did — it worked for us,” said tournament GM Jesse Hale. “We still live in a hockey-centric market, so if you put on a good product, people are going to come watch it. The scouts came in waves — lots of exposure.

“The hockey on the ice was outstanding because of a lot of great teams. The parity was very impressive. I think anybody could’ve beat anybody.”

In the end, it was the SAHA sports school team based in Dunmore — just east of Medicine Hat — getting the beat that mattered most, as it topped the Vancouver NE Chiefs in Sunday’s thrilling 4-2 final at the Max Bell Centre.

SAHA is coached by Brayden Desjardins, the son of coaching legend Willie Desjardins, a former bench boss — most notably — of the CIAU’s Calgary Dinosaurs, the NHL’s Vancouver Canucks and the WHL’s Medicine Hat Tigers.

“My dad’s won a lot of things is his life, so to finally get one is super exciting for me,” said the junior Desjardins. “I’ve been a part of SAHA from the start. We’ve only been a two-year program, so it’s super new. But to put our name on the map here by winning The Mac’s is unbelievable.”

To do it in the debut year of CSSHL — with 10 squads representing the circuit — at the long-running tournament makes it more special.

And that they beat the B.C. Elite Hockey League Under-18 AAA champions gives it even more meaning.

“Especially with us being a new academy, it’s a great accomplishment,” said SAHA forward Shane Smith, the tourney’s playoff MVP. “We’re helping to put the CSSHL on the map. This is such a great league, so you’ll see more winners coming from this league.”

SAHA got on the board early — just 31 seconds in — on Smith’s shot from the slot, converting a feed from Aiden Oiring.

The CSSHL team then got busy on the power play, when Oiring tucked the puck in past Chiefs goaltender Oliver Ayeung-Ashton at the side of the crease.

That man-advantage continued to pay dividends for SAHA early in the second period, when Smith — who assisted on Oiring’s goal — netted his second of the game, tapping home from the side of the net a pretty pass from the half-boards courtesy of Elijah Anderson.

“We definitely talked before the game about how we wanted to get a good start,” said Smith, the playoff MVP of the tournament. “Sometimes we’ve struggled with starts, but I think we came out strong in this one, and I got a good bounce to get the puck in the middle and just got it in. I think that was really key in our victory.”

But the Chiefs didn’t quit.

They got back-to-back goals minutes into the final frame from Matthew Biros — when he zipped home a loose puck from the mid-slot — and Adam Lore — knocked in a puck that ricocheted off the back boards and fell down perfectly for him in the crease.

It dented what was an otherwise stellar game by SAHA goalie Zach Zahara and put the game suddenly in question.

But he stood tall along with the defence the rest of the way, and Anderson added an empty-netter in the final two minutes to secure the triumph.

And the celebration — with SAHA sticks, gloves and bodies flying through the air — was on.

“This is such an amazing event,” said Smith, a farm boy from north of Brooks, Alta. “We’ve always wanted to be here. So it was amazing, and we’ll never forget this moment.”

His coach agreed they were on a mission.

“I think our desperation was the difference,” Desjardins said. “We were blocking shots, we were coming back hard, we were doing the little things … We really really wanted to win. Our compete and our desire was better than anybody else.”

To reach the championship tilt, SAHA burned the Calgary Flames in a 4-3 overtime quarterfinal thriller and then the Calgary Northstars in a 4-2 semi — both on Saturday.

Meanwhile, the Chiefs made the final by dumping RINK Winnipeg 6-3 in quarterfinal action and then topping the Okotoks Bow Mark Oilers 5-3 in the semifinal later Saturday.

It just didn’t go their way in the final.

But their hockey season isn’t over yet.

By virtue of a two games-to-one victory over the Alberta champion Calgary Buffaloes in last weekend’s TELUS Cup Pacific Region qualifier, the Chiefs get ready to vie for the 2022 TELUS Cup — the Canadian U18 club championship — at Calgary’s Markin MacPhail Centre, April 18-24.

In the ‘B’ final earlier Sunday between CSSHL academies, Springbank’s Edge School doubled up B.C.’s St. George’s School 8-4 at Max Bell. Nicholas Johnson’s second goal of the game in the second period stood as the winner for the area U18 prep team … Even earlier Sunday, the BCEHL’s Greater Vancouver Canadians edged RINK Kelowna 4-3 on a third-period goal from Dylan Nazareth to capture the ‘C’ crown … Awards were handed out Sunday to the top round-robin performers with Yale Hockey Academy’s Coy Pighin picking up three. The Red Deer product was named the MVP, after counting seven points — including three goals. He was also honoured as the best plus/minus player and the most sportsmanlike player. Other hardware went out to: Spencer Borsos (Calgary Royals) as top goaltender; Carson Walters (Chicago Mission) as top scorer with seven points, including four goals; Justice Christensen (Yale) as top defenceman; Brad Bowen (Yale) as top coach; and Vancouver Island’s Shawnigan Lake as most sportsmanlike team.