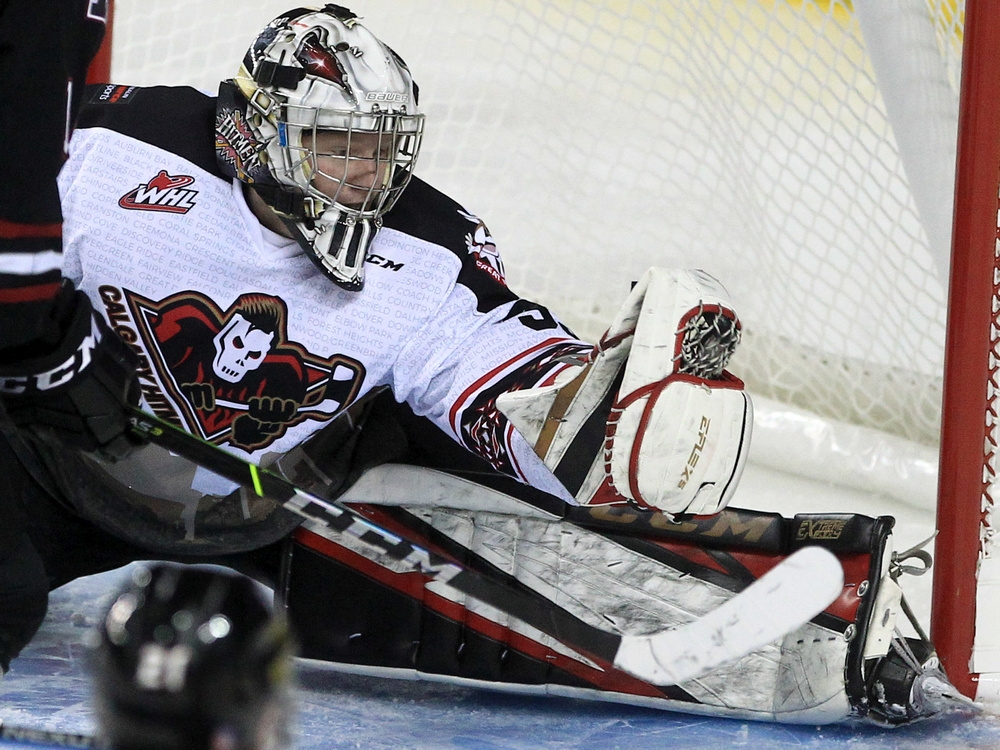 The Calgary Hitmen are all about that heading into the 2022-23 Western Hockey League campaign.

It stems from last year’s ugly opening that ultimately helped determine their fate of missing the playoffs and a desire to right the season-long wrong by — at least — giving themselves a shot at winning the WHL championship.

“We had a rough first weekend,” said Hitmen goaltender Brayden Peters, reflecting on last fall’s first weekend of the regular season — 9-2 and 4-1 falls to the Lethbridge Hurricanes. “The first two games weren’t what we wanted.

“So right now, we can’t look ahead of this weekend (to open the season). We obviously have our long-term goals. But for now, we have to come together night-in and night-out and prove it every night. We can look ahead, but it should only be about the next game.”

The obvious long-term lookahead is to a playoff spot, something that evaded them last year despite a promising first part of the schedule.

Winning only 11 of their final 37 games, the Hitmen struggled down the stretch to finish with a sub-par 25-34-7-2 record and just an agonizing two points out of a post-season position in the WHL’s Eastern Conference.

One year older and wiser — and still stinging from that end-of-season bitterness — they’re allowing that to fuel their fire heading into the season-opening home-and-home series with the Swift Current Broncos — Friday night in Saskatchewan’s InnovationPlex (7 p.m.) and Saturday night at Scotiabank Saddledome (7 p.m.) — to drop the puck on the current campaign.

“Right now, I think it’s going out there with the attitude to prove to everyone that we’ve improved and we deserved to make playoffs last year,” said Peters, a product of Taber, Alta. “We missed out by two points, and that left a sour taste in our mouths to end the season.”

His partner in the net, Ethan Buenaventura, is of a similar mind-set.

“The end-goal is to win the championship, and when you don’t even get the opportunity to play in the playoffs, it’s rough,” said the Winnipeg native, a 2019 fourth-round draft choice by the Hitmen. “We left last year with a pretty sour taste in our mouth. We all think we definitely could’ve made the playoffs and did better than what the result was. So I know every single guy on the team took the off-season very seriously. We’ve got some stuff to prove in the league this year.”

That begins with the two twine-minders.

Both Peters — fresh off rookie camp with the NHL’s Anaheim Ducks — and Buenaventura offer a one-two last line of defence that few rivals can match.

And that’s heightened more by the backbone of the club — a blueline corps that returns in tact from last year. NHL draftee Tyson Galloway — 19 and still away at camp with the NHL’s St. Louis Blues — is expected to lead a unit with plenty of WHL experience. It also includes three other 19-year-old defencemen in Blake Heward, Keagan Slaney and Trey Patterson.

“I think just the compete they’ll have every night is the biggest key,” said Buenaventura of his d-men. “I know going into every single game that they’re going to have our back. You can trust them with just little stuff like allowing us to see the puck from the point — they’re going to box guys out. They’re going to protect us if anything happens. So we’ve got the trust in them and they’ve got that trust in us, and that’s a big thing.”

The next thing is whether the Hitmen can support the goalies on the scoreboard. Beyond offensive stars Sean Tschigerl and Riley Fiddler-Schultz — both still away at NHL camps in St. Louis and Los Angeles respectively — the forward group is a bit of a question mark offensively.

Last winter, 2018 Hitmen draftee Zac Funk scored 22 goals — just one back of Tschigerl (23) and six back of snipe-leader Fiddler-Schultz (28) — to offer top promise among the less-heralded forwards. And the rest are motivated by one full year of WHL experience after COVID robbed them of that two years ago.

“We have high-end forwards here with Tschigs and Fidds, and then we have so many guys that took strides last year that will have elevated roles,” said Peters, himself a 2017 Hitmen fifth-rounder. “It seems like guys up front are ready to take that step and take on the added responsibility and added playing time that will be coming their way.

“I have full belief that our forwards will step up and fill those roles.”

And, hopefully, fill the nets — if not with many pucks, then with timely pucks.

Given what looks to be a solid back-end, the Hitmen likely won’t need to be high-octane.

But they expect to be winners with a more seasoned bunch up and down the roster.

“We feel like this year it’s known that we’re getting to be a more experienced team,” Peters said. “We don’t have near as many first-year guys coming into the league. Everyone that was here last year and even the new guys got some experience last year that we didn’t have the opportunity to get during the COVID year.

“In the room, we have all the belief in ourselves. If someone outside the room doesn’t believe in us or doubts us, then we can go out and prove them wrong.”

And back to the playoffs, where they believe they belong.

“We want to make a big step as a team,” added Buenaventura. “We can be one of the top teams in the conference — win a lot more games and really make a playoff push this year. People might look at us as underdogs this year and might not look at us as high as we expect to be, and that’s totally OK with us, and we’re OK with proving that we are capable of doing that. Being one of the top teams in the conference, that really matters to us. We all want it extra bad this year after the sour taste of last year.

“Hitmen fans should be excited about what we are going to bring this year. It’ll be an exciting year to watch us.”

The Hitmen finished the pre-season with a 4-0 mark, after two wins apiece over the Red Deer Rivals and the Edmonton Oil Kings … The club traded forward Mason Finley to the Oil Kings earlier this week in exchange for a conditional eighth-round pick in the 2023 WHL Prospects Draft. The 2004-born forward, from Kelowna, B.C., was drafted by the Hitmen in the fifth round of the 2019 pick-em and appeared in 40 games of the 2021-22 season, scoring two goals and 11 points … Of their 34 home games this year, the Hitmen will play six out of the Tsuut’ina Seven Chiefs Sportsplex, beginning with Nov. 2 and Nov. 4 dates. The others are slated for Jan. 18, Jan. 28, Feb. 19 and Feb. 25.