Users’ feeds have become inundated with posts to pages they follow made by complete strangers.

People are turning to Twitter to try and understand what has happened with their Facebook account and to see if they have been hacked or not.

Australian outage tracker Downdetector has received more than 1400 reports of Facebook problems, the vast majority of which relate to the feed.

Users around the world are making the most of the malfunction, some people posting memes making light of the situation, while others are using the glitch to try to gain exposure for their YouTube or other social media channels.

One meme that has been doing the rounds in several users’ feeds is of a turkey sandwich.

Others are using the glitch as a fundraising opportunity – one user has reported seeing someone sharing their Paypal details to receive donations for their sick cat.

Some users are reporting their feed appears to be slowly returning to normal, with the occasional post coming from pages, groups or people they follow.

Downdetector’s data showed the number of Australian Facebook users who reported the bug peaked at 1436 just before 5pm.

Since then the site has recorded a decrease in reported problems.

Facebook has been contacted for a comment on the situation. The social media giant has so far not issued a statement. 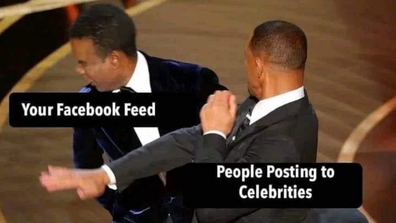 Facebook users get meta with reactions to bizarre malfunction