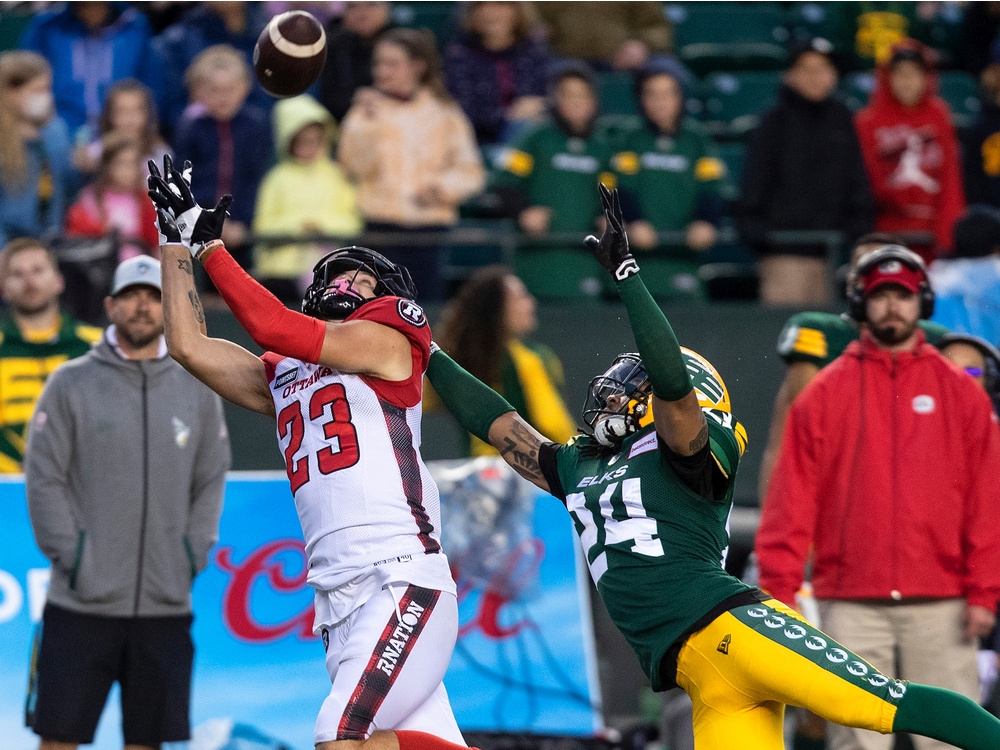 Mark Korte was back in his usual spot Saturday playing right guard on the Edmonton Elks offensive line against his former Ottawa Redblacks teammates.

But this home-and-away series against the club that drafted him fourth overall in 2018 has offered a quick trip down memory lane for the 26-year-old native of Spruce Grove.

In last week’s 30-12 win, the Elks guard suddenly found himself back on the field at TD Place Stadium and snapping the ball, no less, out of the centre position he held there for more than a spell over the previous three seasons.

“Yeah, it was a little surreal being back in Ottawa, for one thing, and being back to playing centre,” said the six-foot-four, 293-pound University of Alberta product, who garnered attention from the NFL’s Washington Redskins while holding the first-ever Pro Day in Golden Bears history. “It was a little bit kind of back-to-the-roots sort thing, but it was good. It went smoothly last week.

Saturday marked the second week in a row the Elks had to make adjustments on the unit in front of Taylor Cornelius, with starting centre David Beard (illness) drawing back into the lineup, only to have left tackle Tony Washington (neck) wind up on the six-game injured list after leaving last week’s game early.

That sent Martez Ivey all the way over to left tackle, while rookie Andrew Garnett made his Canadian Football League debut filling in at right tackle.

“Continuity makes such a big difference on the O-line, so thankfully we were able to move some guys around,” Korte said. “Tomas (Jack-Kurdyla) has been around for a while, so plugging him in was easy. I’ve played centre before, so as hard as it is to replace guys, especially a guy like David, I thought it went as smoothly as it really could have.

“There was a bit of a feeling-out process.”

Exactly what is involved with playing the only other position outside of quarterback that is responsible for touching the ball every offensive play?

“And then there’s kind of an inherent leadership piece with the centre position, as well, which is why David makes such a big difference,” Korte said of his fellow Golden Bears alumnus. “He ties those things together.”

At six-foot-five and 325 pounds, Garnett certainly looked the part coming into his coming-out party in the CFL Saturday.

All that was left for the rookie free agent out of Towson was to prove he fit the bill.

“The guys have been very welcoming, everyone’s very supportive. It’s definitely a big step since I’m fresh out of college,” said the 25-year-old native of Upper Marlboro, Md. “But I’m ready to take that challenge and I’m excited to play against the Redblacks.”

A mini-camp with the NFL’s Arizona Cardinals in late May marked his most recent stop, prior to arriving in Edmonton on Aug. 3.

“Going from Pro Day training and then to that, it was a smooth transition,” Garnett said. “I felt very good. The competition and just the environment was amazing, and it’s the same here.

“The CFL is really no different. It’s a great opportunity and a great place to be.”

AND THEN THERE WERE 12

He didn’t make it anywhere near getting onto the field Saturday, having been signed to the Elks practice squad earlier in the week, but the addition of Drew Powell makes it 12 quarterbacks on or off the roster since Chris Jones took over as head coach and general manager of the Elks in the off-season — a list, of course, that includes former No. 1, Nick Arbuckle, who started for the Redblacks on Saturday.

“Hopefully, I’ll be the last addition,” said the six-foot-two, 220-pound Livingstone product, who — small world — also happens to hail from Upper Marlboro, a community with a whopping population of 652 in the most recent census from 2020. “That’s how I’m looking at it. I can’t control all the stuff that happened before me being here and the guys that are in the room.

“It’s just about coming in and doing what I’m supposed to do. Picking up the playbook, picking up the plays, asking questions and being present. So, I’ve been doing my best to be in their ear in the pocket. I can’t speak to what the other guys did. I know what some coaches want to see from the quarterback position. They want to see leadership, they want to see initiative. Hopefully, I gain the trust of the coaches.”