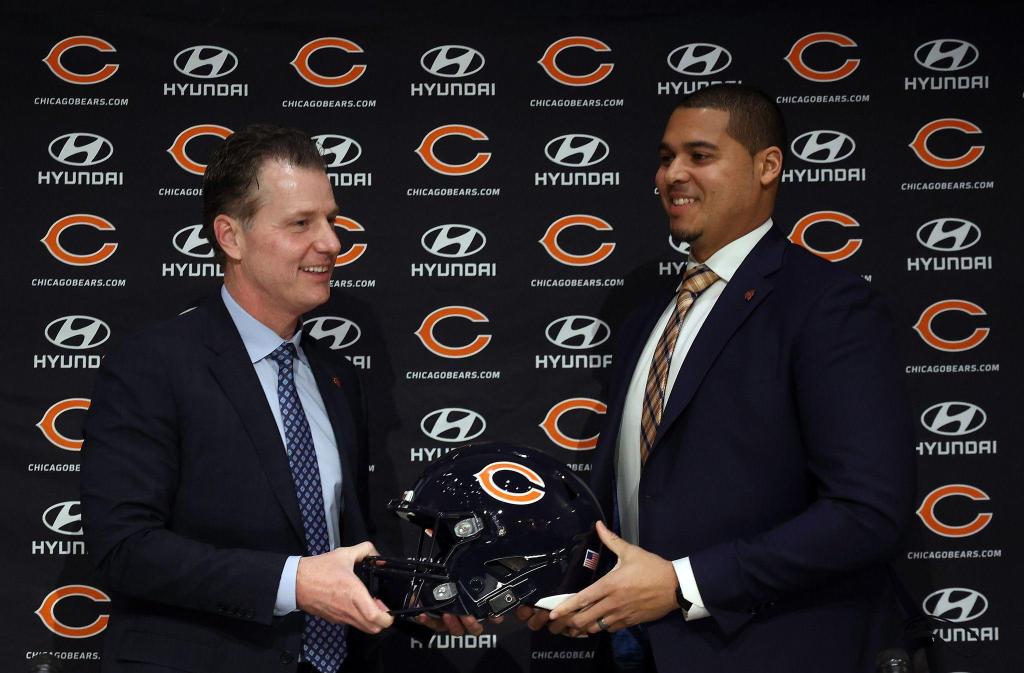 That was Ryan Poles’ reaction when he learned the Buffalo Bills matched the offer sheet Ryan Bates signed with the Chicago Bears last week, giving the first-year general manager more work to do to upgrade the offensive line.

The Bears were optimistic they would land Bates, a versatile lineman that generated solid interest as a restricted free agent. The Bills were snug against the salary cap and the Bears offered a player with only four career regular-season starts $17 million and a four-year contract with the first two years, roughly $8.85 million, fully guaranteed.

The Bills opted to bring back Bates with those terms and Poles learned the news when meeting with reporters Monday afternoon at the NFL’s annual meeting.

It’s a setback for the Bears, who lured Bates despite competition from the Minnesota Vikings and New England Patriots.

Bates wasn’t going to make or break the 2022 or 2023 seasons, but this further challenges Poles to follow through on his goal to make the Bears better up front and better for quarterback Justin Fields.

Nearly all of the front-line players worthy of big money have been scooped up, something that made Bates a little different. The Bears and the other teams involved noticed a diamond in the rough. Of course, actually landing restricted free agents is difficult and something the Bears have not done in 16 years since signing nickel cornerback Ricky Manning Jr. away from the Carolina Panthers.

“We’ll adjust and we’ll keep adding players,” Poles said. “It’s out of your control. It’s just part of the deal where you put your best foot forward and we did. We came strong.

What the Bears haven’t done yet is identify a replacement for James Daniels, who left for the Pittsburgh Steelers in free agency, and they have yet to specify a plan at offensive tackle. Poles indicated the team could look at second-year players Teven Jenkins and Larry Borom at the tackle positions. He was noncommittal about which side they would play but this was more than he offered the last time he spoke at the scouting combine.

Part of the hesitation is fair. Personnel staff and coaches want to see players on grass. They want to work with them. But it’s also an indication of the serious level of need in the trenches.

“They will compete, but at the same time, we’re always looking to add talent as well,” Poles said of Borom and Jenkins. “If we add another tackle, I want to see all of those guys compete.

“I know Teven was right in college, Larry was left in college, so there’s a comfort level there, but Teven played some left last year coming off his whole medical situation, so we’re going to play with that and we’ll see what the best fit is.”

Some around the league said they expect the Bears to pursue a veteran left tackle. Pickings are slim but there are more options to consider than last August when the team scrambled to sign Jason Peters.

Eric Fisher is available after spending last season with the Indianapolis Colts. Fisher returned after suffering a torn Achilles tendon at the end of 2020 with the Kansas City Chiefs, so he was working through that at the start of the season and later was hampered by a pectoral injury.

If the Bears sign Fisher or another veteran, it would create a situation in which Jenkins and Borom compete for the right tackle job. Maybe one could be bumped into right guard, presumably the spot Bates was going to play if the team landed him.

But Poles said he “can’t force something,” meaning he can’t add a player at that left tackle spot if there’s not a fit.

“Larry played in the SEC at left, I think he’ll be fine,” Poles said. “Teven played last year at left, he has room to grow. So they’ve done it. Sure, I would love to have experience but sometimes it’s just the way it all plays out.”

What the Bears have accomplished is adding a center, signing Lucas Patrick to a two-year, $8 million contract, and signing Dakota Dozier to a one-year, minimum deal. Not only is Patrick familiar with offensive coordinator Luke Getsy from their time together with the Green Bay Packers, he has a nasty streak the Bears like.

“That’s how he survives, and that’s what we need up front,” Poles said. “Just doing it myself, that’s contagious. Other people either have got to go with it or you just don’t fit in. That’s going to improve the rest of the group and we’re going to keep adding guys like that.”

The Bears have two draft picks in Round 2 and one in Round 3, and that can be a fruitful area to find solid interior linemen. They’re unlikely to land a future left tackle there. Plus, the depth chart at wide receiver needs more work and there are multiple needs in the secondary at cornerback and safety.

In other words, Halas Hall remains a work in progress but Poles believes steps have been made to better support Fields.

“It’s a difficult challenge,” he said. “But I think as a whole with the scheme, with coaching, with some of the additions we’ve had, I think it’s going to get better. I think he’s going to be put in a situation where he’s going to be comfortable, and I’ve said this all the way back to the very beginning, allowing him to do what he does best is going to allow him to grow from that point.

“I want to give him everything I possibly can, but you still have to construct an entire team. You can’t go blank in one area and then just load up in one area.”