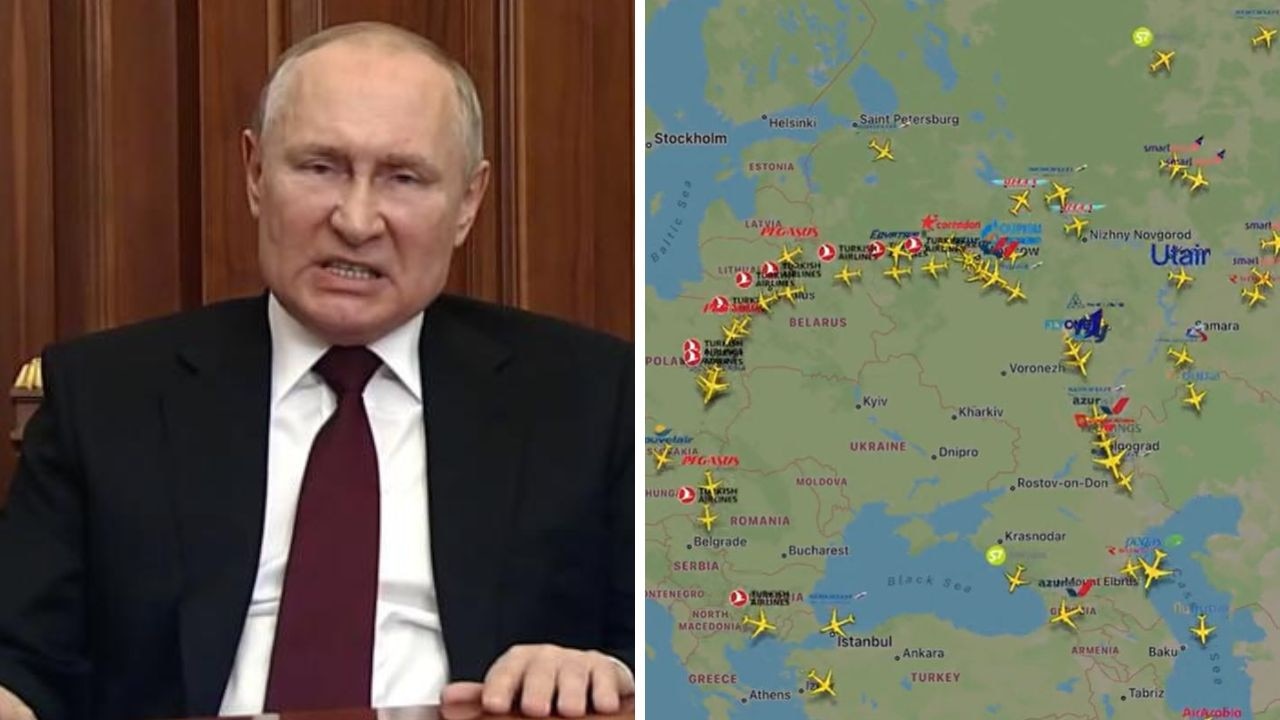 Only victory can save Putin now. The desperate Russian President is doubling down on his failed strategy as defeat will almost certainly result in his deposure.

Wednesday’s proclamation of a ‘partial mobilisation’ of up to 300,000 Russian reservists is the clearest sign yet that Putin is in grave danger.

“Putin is stuck in a quagmire, where the clearest way out is to stop, turn around, and go back out of Ukraine the way he came in,” says Center for Strategic and International Studies (CSIS) director Max Bergmann. “Yet leaders stuck in an unwinnable war often just wade deeper into the muck. Putin is following that well-charted path, and his regime may not survive.”

Its headlong rush towards the Ukrainian capital of Kyiv in February was repulsed.

Its attempts to hold on to Ukraine’s eastern provinces are collapsing.

And that was Putin’s fallback option.

The whole point of his “special military operation” was to “liberate” the largely Russian-speaking Donetsk, Luhansk, Kherson and Zaporizhzhia districts. His attempt to topple the entire democratic Ukrainian government was sold by his propagandists as simply a bonus move.

Now Putin is attempting to double down on his “liberation” line. He’s ordered referendums within the occupied territories this weekend to declare their support for his rule.

Now Putin must put up, or shut up.

The hawks he placed in positions of power to secure his government are getting angry.

They want to do away with all pretence.

But that risks serious domestic unrest.

“The existential danger for Putin is that his decision will, if it is at all impactful, bring the war home to more Russians,” says Mr Bergmann. “Wars are popular until they suddenly are not.”

The former editor-in-chief of the Chinese Communist Party’s Global Times news service Hu Xijin warns there is “no turning back other than winning” for Putin.

“In other words, this conflict has become that of a life-and-death nature,” he writes.

International analysts estimate the Russian military has lost between 70,000 and 80,000 troops killed or wounded. That’s half the original invasion force.

Putin’s move to compulsorily mobilise 300,000 fresh troops is a desperate attempt to hold the line.

Anything else would lead to collapse.

“Instead of getting out of this quagmire, Putin, by announcing a military mobilisation, has bet the future of his regime that he can successfully wade through it. That is a bet he is likely to lose,” Mr Bergmann says.

On paper, Russia has more than two million reservists. But few get regular training. None are well equipped.

Russian Defense Minister Sergei Shoigu said overnight that none of these conscripts would be sent into battle. But Russia has already done this.

And the move to call up the civilian reservists is an open admission of defeat.

Putin can no longer sell to his own people the line that the invasion of Ukraine is not a war.

It’s an admission the “special operation” is much more than a “peacekeeping” effort.

International observers have called this weekend’s secession referendums in Russian-occupied territories a sham.

Putin doesn’t care. All he wants is a vaguely plausible excuse to escalate further.

If Russia considers the occupied Ukrainian provinces to now be part of Russia itself, then he could justify “total war”.

That means activating the political powers necessary to dedicate Russia’s entire economy to the war effort, and deploy all its military might.

And that includes nuclear weapons. Putin made that clear on Wednesday.

“Please don’t forget that there will be no absolute winner or loser in a military conflict between nuclear powers,” the CCP’s mouthpiece Hu wrote. “Whoever tries to completely overwhelm the other side must be crazy.”

But it’s a threat Putin’s been making since before the start of the invasion.

“Putin’s nuclear credibility is wearing thin,” Bergmann added. “Use of nuclear weapons would only further isolate Russia, causing rifts with India and China and causing shock within Russia.”

There’s no doubt Putin is manoeuvring to give himself a sense of justification.

“Encroachment onto Russian territory is a crime which allows you to use all the forces of self-defence,” former Russian President Dmitry Medvedev declared in a Telegram message.

So far, the West’s response has been the same as every other time Russia has raised the nuclear option.

“This is dangerous and reckless nuclear rhetoric. It’s not new as he has done it many times before,” NATO Secretary General Jens Stoltenberg said in a statement. “So far, we have not seen any changes in the nuclear posture, the nuclear readiness, but we monitor this very closely, and we stay vigilant.”

The Kremlin-controlled Russian news services have been unable to deflect news of its catastrophic military setbacks.

“The Ukrainian battlefield offences have been significant enough to penetrate the Russian media bubble, up-ending Russian narratives and forcing Kremlin propagandists to scramble,” says Bergmann. “The call up of fathers and uncles will now increasingly bring this war home and … turn the tide of public support for the war.”

Putin’s autocracy grew under the guise of democracy because of public apathy.

His simplistic argument was appealing.

He made the hard decisions. He made them happen. He got them right.

“Part of the larger unwritten social bargain between Putin and the Russian public is the people stay out of politics in exchange for relative prosperity and stability,” says Mr Bergmann. “That bargain is being totally up-ended by the war.”

Economic sanctions have put the Russian economy under severe stress.

“Now the public is being forced to fight and die in a war they have little interest in,” he adds. “Meanwhile, the ineptitude and military malpractice that has been exposed inside the Putin regime, and the broader global isolation and loss of international prestige, will inevitably lead to growing angst inside the Russian state.”

Putin has richly rewarded those who supported him.

However, they seem unwilling to repay this with their lives.

Wealthier families have long managed to avoid conscription. And the simple fact that every bus, train and airline flight out of Russia overnight had been sold out shows the extent to which they’re willing to continue doing so.

Kremlin spokesman Dmitry Peskov did not answer when asked if a travel ban would be imposed on eligible conscripts.

But it’s the apathetic middle classes that are the target of the latest compulsory draft.

Overnight, crowds chanting “no mobilisation” took to the streets of St. Petersburg for the first time since the start of the war. Police quickly cracked down hard on similar demonstrations in Moscow.

The Russian is keen to sacrifice the lives of his subjects to save his own.

“The mobilisation order will allow Russia to prevent those currently in the military from leaving even when their terms of service are up, “Bergmann says. “This stop-loss policy should keep forces on the battlefield and stave off a total collapse.”

But it comes with a price.

“Those that signed up to fight on short, temporary contracts are now trapped. Morale could further plummet,” he added.

The recent loss of one of Russia’s elite units bodes ill for the future of any hastily trained troops.

“The effort to mobilise 300,000 additional reinforcements will be a huge challenge, as these troops will need to be trained and equipped. It will take time — a luxury that Russia’s beleaguered forces in eastern Ukraine may not have,” says Bergmann.

Volunteer recruits have dried up.

Moscow’s Wagner Group paramilitary force has taken 1500 convicted criminals into its ranks. They get freedom in return for fighting. If they live.

And they’ll be standing alongside unwilling civilian conscripts.

In his speech, Putin promised they would be trained. But the ability of the Russian army to do so – let alone equip – that many troops is in doubt.

“The issue is the Russian army is poorly led and poorly trained,” tweeted former US commanding general in Europe Mark Hertling. “That starts in basic training, and doesn’t get better during the RU soldier’s time in uniform. And placing “newbies” on a front line that has been mauled, has low morale, who don’t want to be there portends more disaster.”