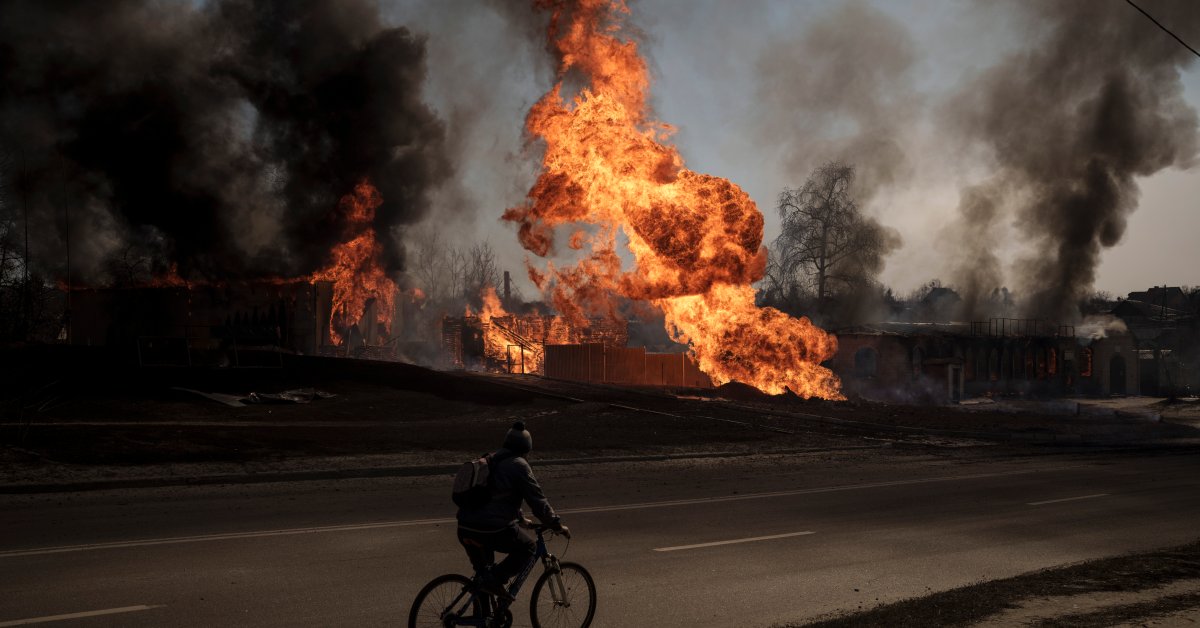 KYIV, Ukraine — With its aspirations for a quick victory dashed by a stiff Ukrainian resistance, Russia has increasingly focused on grinding down Ukraine’s military in the east in the hope of forcing Kyiv into surrendering part of the country’s territory to possibly end the war.

The bulk of the Ukrainian army is concentrated in eastern Ukraine, where it has been locked up in fighting with Moscow-backed separatists in a nearly eight-year conflict. If Russia succeeds in encircling and destroying the Ukrainian forces in the country’s industrial heartland called Donbas, it could try to dictate its terms to Kyiv and, possibly, attempt to split the country in two.

The Russian military declared Friday that the “first stage of the operation” had been largely accomplished, allowing Russian troops to concentrate on their “top goal — the liberation of Donbas.”

Many observers say the shift in strategy could reflect President Vladimir Putin’s acknowledgment that his plan for a blitz in Ukraine has failed, forcing him to narrow his goals and change tactics amid a disastrous war that has turned Russia into a pariah and decimated its economy.

Read More: The War in Ukraine Stands to Make Norway a Lot of Money

U.S. and British officials also have noted that Moscow has increasingly focused on fighting the Ukrainian forces in the east while digging in around Kyiv and other big cities and pummeling them with rockets and artillery.

The chief of Ukrainian military intelligence, Kyrylo Budanov, said Sunday the change of focus could reflect Putin’s hope to break Ukraine in two, like North and South Korea, and enforce “a line of separation between the occupied and unoccupied regions.”

“He can’t swallow the entire country,” Budanov said, adding that Russia appears to be trying “to pull the occupied territories into a single quasi-state structure and pit it against independent Ukraine.”

Putin and his generals haven’t revealed specific military goals or a planned timeline, but the Kremlin clearly expected a quick victory when Russian troops rolled into Ukraine from the north, east and south on Feb. 24.

But the Russian attempts to swiftly capture the Ukrainian capital of Kyiv, the country’s second-largest city, Kharkiv, and other big cities in the northeast have been thwarted by well-organized Ukrainian defenses and logistical challenges that stalled the Russian offensive.

Russian forces have pounded the outskirts of Kyiv with artillery and air raids from a distance while putting their ground offensive on hold, tactics they also have used in attacking Kharkiv, Chernihiv and Sumy in the northeast.

In some sectors, including the city of Makariv that sits near a strategic highway west of Kyiv, Ukrainian troops have pushed the Russians back.

Associated Press reporters saw the carcass of a Russian rocket launcher, a burned Russian truck, the body of a Russian soldier and a destroyed Ukrainian tank after the fighting there a few days ago. In the nearby village of Yasnohorodka, the AP witnessed positions abandoned by Ukrainian soldiers, who moved farther west, but no sign of Russian troops’ presence.

Mykola Sunhurovskyi, a military analyst at the Kyiv-based Razumkov Center think tank, said Russia has abandoned attempts to storm Kyiv and other big Ukrainian cities for now and is laying siege to them to try to weaken Ukraine and win time.

“Russia has shifted tactics … to redistribute its forces and prepare for the next active stage of the war,” Sunhurovskyi said.

A Ukrainian Territorial Defence Forces member holds an NLAW anti-tank weapon, in the outskirts of Kyiv, Ukraine, on Mar. 9, 2022.

The Russian forces encircled the key strategic port of Mariupol and besieged it for weeks, hammering it with rockets and artillery in a carnage that killed thousands of civilians. The fall of Mariupol would free up Russian forces there and allow them to engage in a potential pincer movement together with another group of troops moving from Kharkiv in the northeast to try to encircle the Ukrainian military in the east.

“Russian forces appear to be concentrating their effort to attempt the encirclement of Ukrainian forces directly facing the separatist regions in the east of the country, advancing from the direction of Kharkiv in the north and Mariupol in the south,” the British Ministry of Defense said Sunday.

A senior U.S. defense official also noted the latest Russian focus on Donbas. The official said Putin may now hope to take full control of the east while keeping other Ukrainian forces occupied with the defense of Kyiv and other areas and then try to pressure Ukrainian President Volodymyr Zelenskyy to formally surrender control over Donbas and recognize Russia’s ownership of Crimea, which Moscow annexed in 2014.

An analysis published Saturday by the Institute for the Study of War in Washington said the degree to which the Russians can push an accelerated move to cut off Donbas will depend in part on how soon their forces can gain full control of Mariupol and how badly damaged they emerge from that fight. It also noted that a halt in the Russian offensive on Kyiv could reflect “the incapacity of Russian forces rather than any shift in Russian objectives or efforts at this time.”

While the Russian military has focused increasingly on bleeding the Ukrainian troops in the east, it has continued to use its arsenal of air- and sea-launched cruise missiles to methodically target fuel depots, military arsenals and weapons plants across the country.

Philips P. Obrien, a professor of strategic studies at the University of St. Andrews, described Saturday’s cruise missile strikes on Lviv near the border with Poland as part of the Russian strategy to cut off supplies to the Ukrainian forces fighting in the east.

“They will still want to disrupt as much as possible the flow of goods and supplies from west to east, much of which starts their journey around Lviv,” Obrien observed.

On the Black Sea coast, the Russians quickly took the port of Kherson and advanced to the outskirts of the key shipbuilding center of Mykolaiv where their offensive stalled.

If the Russian forces succeed in encircling Mykolaiv, Odesa and several other Black Sea ports, it will have completely cut Ukraine’s access to its coast in a devastating blow to its economy. The seizure of Odesa will also allow Moscow to establish a link to the separatist Trans-Dniester region of Moldova that hosts a Russian military base.

Despite Ukrainian and Western fears, the Russian army so far hasn’t pursued efforts to bypass Mykolaiv and march on Odesa. Ukrainian authorities have noted that Russia’s failure to press its offensive along the coast could be explained by the fact that most of its troops in the south have remained locked in the battle for Mariupol where they have suffered heavy losses.

Read More: The Critical Role of Ukrainian Women in the Fight Against Russia

On Friday, the Russian military reported it had lost 1,351 soldiers killed and 3,825 wounded since the start of the campaign, but NATO estimates 7,000 to 15,000 have been killed — potentially as many as the Soviet Union lost in the entire 10-year war in Afghanistan.

The big losses and slow pace of the Russian offensive could be a factor that forced Putin to lower his ambitions and take a more realistic approach.

Volodymyr Fesenko, the head of the independent Kyiv-based Penta Center, said Russia’s declared shift to the east could be an attempt to put a good face on its failed blitz and regroup before the next stage of fighting.

“Both sides need a break now for various reasons, and the Kremlin is using it to regroup its forces and search for new tactics without changing its strategic goal of subduing Ukraine,” Fesenko told the AP.

“Tactics could change from a blitz to laying siege to cities, destroying the economy and the infrastructure with bombardment, blockading ports and doing other things. Putin has a broad arsenal of means of pressure.”

“The stiff Ukrainian resistance could turn the war into a protracted conflict, and then the issue of financial and military resources, including warplanes and tanks Zelenskyy is urging the West to provide will be of primary importance,” he said.

Karmanau reported from Lviv, Ukraine. Robert Burns and Matthew Lee in Washington and Danica Kirka in London contributed to this report.