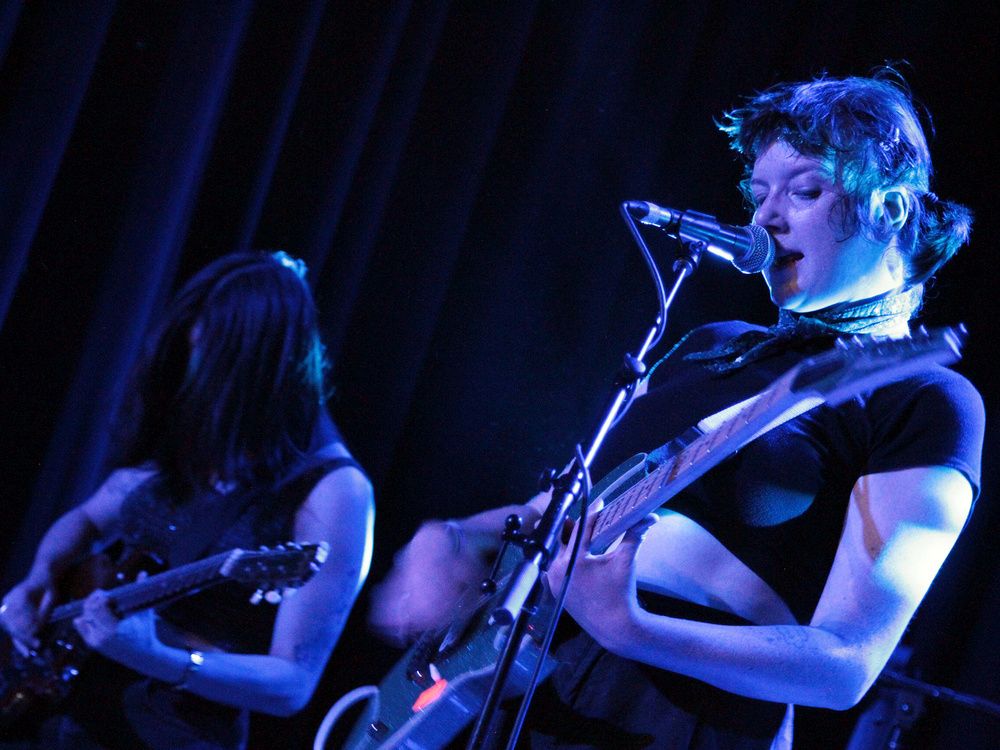 Not to mention interesting characters around every corner

One thing that’s been really swell about the city-spanning fest is the proliferation of musicians on the streets. I live downtown and have run into a foot-tall spiky punk hairdo, plenty of longhairs with full-sleeve tattoos, and of course lots of old friends from the music wandering venue to venue in the night. Plus, Purple City has a weird pink Grimace-like mascot meandering in the mix.

Following that pattern after reviewing all day at the big tent in Hawrelak Park, which you think might tire a person out, I sped over to Starlite Room just in time to catch the Faith Healer reunion — it’s the first time they’ve played for a crowd in years. Jessica Jalbert, who used to work at the bar, joked it was a special thrill to be on stage, and with Jenni Roberts on bass, Mitch Davis drumming, Ross Nichol killing it on keyboard and stage goofball Renee Wilson playing guitar, the band was just brilliant. Roberts is one of the best bass players in the country, and Wilson and Nichol sonically jazz-wandered but always kept the thing together under Jalbert’s angelic, sighing vocals.

To switch gears from this purposeful dream pop, we crossed the Starlite’s steel corrugated border (and briefly out of Purple City, officially) over to Temple, where local death metal maniacs Begrime Exemious summoned their growling-yet-discernable lyrics, vocals shared by Derek Orthner and shredder Frank Thibaudeau. They blew ears playing a number of insane new songs off their brand new Rotting in the Aftermath, helicopter hair whirling around like wolverines caught in a washing machine as the crowd swirled and held fists high. I especially loved hearing Orthner politely ask for adjustments from the sound guy in his gruff demon voice, then switch to singing about burning congregations and the flaming embrace of hell itself. Metal!

Still not sated after watching bands since 1 p.m., it was over to Freemason’s Hall as a last stop, catching the highly and correctly recommended Toronto grunge band Dilly Dally. Enda Monks flipped between cute and shrieking as Liz Ball patrolled the stage with her guitar. Like a lot of these Purple City shows, the lighting’s been low and moody, and the late-night show has the energy of a ferocious ghost, the front row full of exhilarated women also raising their fists and yelling along in the packed, chandeliered hall.

We’re lucky to have this fest, hope you got a taste of Purple yourself.