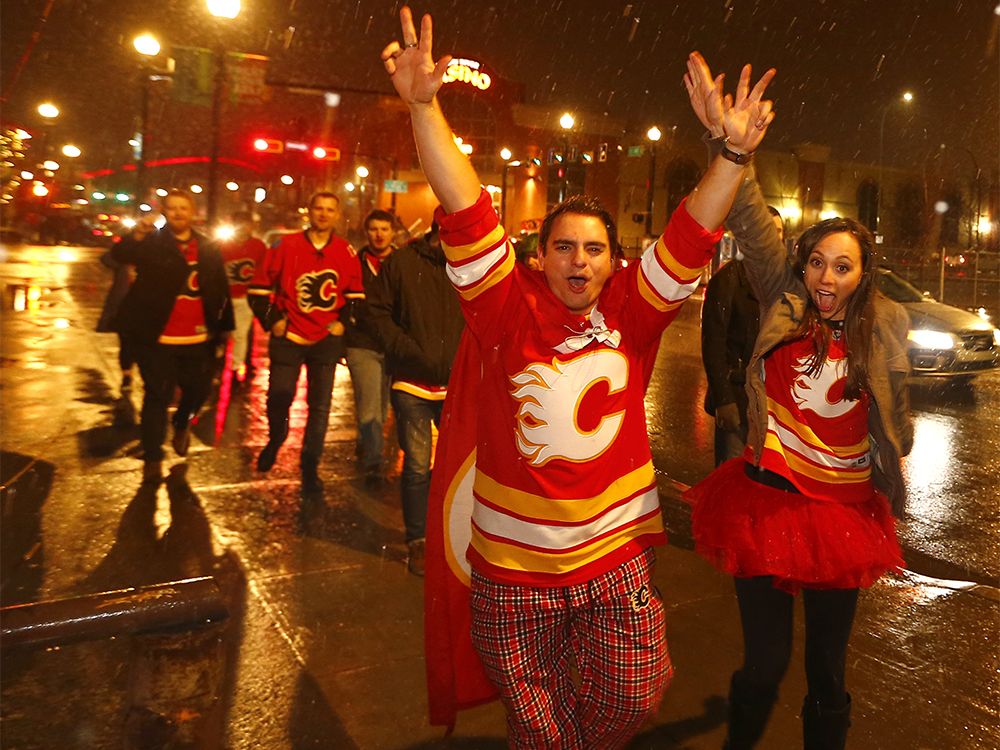 Calgary’s Red Mile is slated for a comeback in a big way this May as Flames fans celebrate their team clinching a berth in the Stanley Cup Playoffs.

And businesses at popular post-game destinations along the stretch of 17th Avenue S.W. couldn’t be happier to welcome back the sea of red jerseys.

It’s been two long years since the Calgary Flames last made a bid for Lord Stanley’s cup, and that was during the 2020 COVID bubble playoffs that saw fans barred from attending games in person and health restrictions limiting post-game libations. The last time Flames fans enjoyed a playoff game in person at the Scotiabank Saddledome was during the Flames’ short-lived appearance in 2019 that ended in the first round when the Colorado Avalanche ousted them in five games.

This year, things will be different; both in terms of fan participation and expectations for the team. Hockey lovers will again flock to the ‘Dome in May to watch their team in playoff action, and those tilts are sure to be followed by mass migration to 17th Avenue S.W. for post-game celebrations or lamentations — great news for the bars and pubs that line the street.

“It’s been a tough four years — two years of construction and two years of the pandemic,” said Ernie Tsu, owner of Trolley 5 Brewpub and president of the Alberta Hospitality Association.

“It’ll be a much welcome boost for every single restaurant along 17th Avenue.”

During the Flames’ ill-fated run to the Stanley Cup Finals in 2004, Tsu’s Trolley 5 was Melrose Cafe and Bar — one of several bars that helped coin the Red Mile monicker 17th Avenue S.W. has donned through every Flames playoff appearance ever since. This year, with a currently division-topping performance, fans are already beginning to show up in droves post-game. And on the heels of a 9-1 blowout win over the struggling Arizona Coyotes, hopes are high that the Flames will play a decent amount of late-spring hockey — something of which Red Mile institutions will enjoy every minute.

“It was an awesome run back in 2004 and we’re looking forward to another deep run by the Flames this year,” said Tsu.

However, both fans and restaurants might want to temper their expectations for any significant boon for businesses along Red Mile, at least for the first round. Concordia University sports economist Moshe Lander said for real financial impact on 17th Avenue S.W., the Flames need to avoid another “flame out” amid high expectations like in 2019 when the team topped the Western Conference only to be booted in the first round.

He said fears of the team coming up short again might prompt some cynical fans to stay home and await a second-round appearance before opening their wallets to go to the games or the Red Mile.

“I will freely admit, I’m a lifelong Flames fan. And I’m not sure that I want to get my hopes up in the first round because I’ve seen this story as recently as a few years ago,” said the Calgary-based economist.

Lander said while Beltline and downtown watering holes may see extra traffic, it could come at the expense of bars and restaurants in other areas of the city. He said if Calgarians are spending money on a night out for a Flames playoff game, they might forego other expenses at businesses closer to them.

“They’re going to suffer from the Flames’ success. We’re just moving economic activity to where we would gather to watch Flames games,” said Lander.

If the Flames stay hot, they still have a shot at clinching the top spot in the Pacific Division, a position they’ve held through most of the season and one that would assure them home-ice advantage through at least the first two rounds of the playoffs if they do advance.

The Flames have seven regular-season dates remaining, their next being a meeting with the Blackhawks in Chicago at 6 p.m. on Monday.