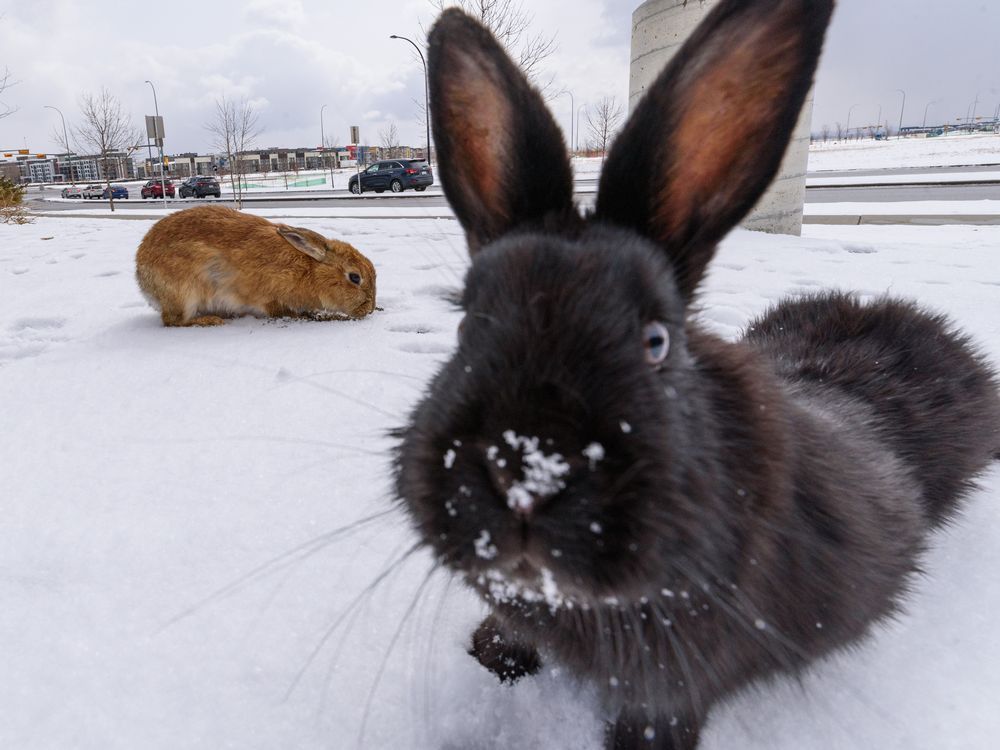 Several Calgarians are stepping up to take on the issue of stray and feral rabbit colonies in the city, but fear the situation could spiral out of control without help.

When people get overwhelmed, they sometimes abandon their rabbit outside. Thousands of rabbits are born feral as a result and left to fend for themselves.

“They’re the same commitment, and they have the same intelligence as a cat or a dog. But unfortunately, they’re not treated that way,” Becker said.

Feral rabbits are domesticated rabbits that have been abandoned or escaped outdoors, with some creating colonies. Rabbit colonies have been reported in several communities in Calgary, including Seton, Auburn Bay, Nose Hill, Edgemont and Bridgeland.

Without someone to care for them, feral rabbits are vulnerable to predators, dehydration, hypothermia, abuse and untreated wounds. Rabbits can also cause issues in neighbourhoods by burrowing into gardens, attracting coyotes, and causing road hazards.

Becker started Wild Rose Rabbit Rescue in January 2021 after she took in a black rabbit that approached her and sat at her feet one afternoon. The volunteer rescue now cares for 22 feral rabbits, with all but six ready for adoption.

“I’ve had rabbits that have come in, and they have been terrified, sick, and not used to people. To see how far they come is really just amazing,” she said.

“For me, it gives me purpose in life. It really just shows that no matter how bad the problem is, if you just show little love and kindness, you can help them.”

However, handling the thousands of feral rabbits in Calgary has become a daunting situation without help from municipal or provincial governments.

Since 2012, Against All Odds Rabbit Rescue in Calgary has been taking in rabbits and re-homing them while trying to educate people about proper rabbit care. Of the 17 rabbits in their care, eight are considered feral.

Co-founder Rosemarie Greening said demand has been “overwhelming” over the last few years. The rescue is seeing more reports of injured cases lately as well — rabbits shot with pellet guns, or struggling to walk with a missing leg.

“I think the main challenges is honestly pure numbers. There’s just so many of them that you just aren’t able to help them all,” she said.

Rescuers are also concerned about rabbit hemorrhagic disease, a fatal contagious illness found in other rabbit populations outside of Calgary.

Pet stores are allowed to sell unfixed rabbits in the city, which can multiply the problem when owners find themselves with an unexpected litter.

The Calgary Humane Society does not take in wild or stray rabbits, partly because the organization believes they are not adoptable, said Weston Jacques, director of communication. However, he said the organization will take injured rabbits in need of help.

The City of Calgary doesn’t currently have a policy on how to deal with feral rabbits either, despite a few recent opportunities.

In June 2021, city council made several changes to its responsible pet ownership bylaw. Despite early discussions, rabbits never made it into the legislation. The city announced it would bring back the no-spay and neuter program on Feb. 17, but kept rabbits out of the project.

Ward 12 Coun. Evan Spencer said feral rabbit colonies have become a growing concern for residents, but “any humane response would be quite resource-intensive, so there hasn’t been any serious movement to formalize any sort of an approach.”

“That’s quite an expensive proposition for the city to take on,” said Spencer.

He said the city also believes feral rabbits are the province’s responsibility, but council would look at it if it “becomes more of an issue.”

However, the province’s website says municipalities are authorized to deal with rabbit concerns.

Seton resident Kyle Nernberg said council’s decision to ignore the issue leaves it up to the local rescues and shelters to take in the sick and injured rabbits. More than 500 people have signed Nernberg’s petition on Change.org calling on council to act.

“It feels really that everybody is just turning a blind eye to it. I don’t want to see a bunch of pest control companies come in and start to inhumanely cull these animals. They don’t deserve that,” Nernberg said.

Humane solutions have proven successful elsewhere, he said, pointing to efforts at the University of Victoria. Protests stopped a lethal cull after 100 of the 1,600 rabbits were killed, which allowed organizers to trap, sanitize and rehome the surviving rabbits.

His petition calls for a trap, spay, neuter, release program at minimum, affordable spay and neuter programs for rabbit owners, laws to protect against irresponsible breeders and owners, and bans against selling unfixed rabbits.

“I honestly think within a few years, it could likely make a big difference within the city.”