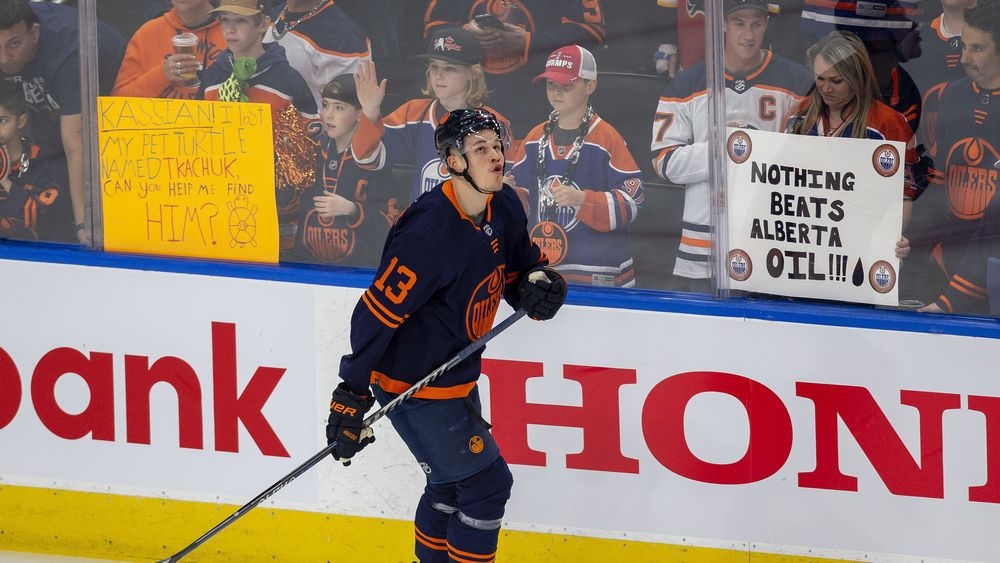 Jesse Puljujarvi is getting a fresh start and a sweet launching pad.

Puljujarvi opened the first day of Edmonton Oilers training camp Thursday on a line with Zach Hyman and Leon Draisaitl, a clear message that head coach Jay Woodcroft is willing to forget last season and give the 24-year-old Finn a golden opportunity to jump start his career.

“He’s looking to take a step in his game and consistently command top six minutes,” said Woodcroft, who didn’t see enough in Puljujarvi to warrant that kind of ice time last year.

“I think he put in a good summer. I think he’s starting out with two really good linemates and he’s anxious to prove what he can do.”

Now it’s up to the embattled and sometimes underachieving winger to do something with this. It’s his sixth year in the NHL. He’s making $3 million. He’s getting another shot in the top six. Even he admits it’s time to step up and finally be the player he can be.

“It is,” he said, adding you can’t ask for more than Hyman and Draisaitl on your line. “They’re a couple of good players. I’ll try to fit there. I feel good. New season. Nobody has to think about last year. It’s a new season and I’ll try to do everything as good as I can and let’s see how that works out. I’m in a good spot, I’m in good shape.”

How long Puljujarvi’s leash is remains to be seen, but, as general manager Ken Holland said in his pre-camp address, things can change in a hurry. Holland made it clear that nothing is going to be handed to Puljujarvi or anyone else because of their reputation or where they were drafted.

The Oilers are at a stage in their evolution where there is only room for people who produce. This is the Shut Up And Play era.

“I think (Puljujarvi) was frustrated the way the year ended and frustrated personally that he wasn’t able to produce more offence,” said Holland. “I think he got frustrated that his role changed. The last half of the year it was greatly reduced and in the playoffs he was playing 10 minutes a night.”

But that’s life in the big leagues, especially on a good team.

“When you get those minutes and you don’t produce, the coaches make changes,” said Holland. “That’s the process of playing in the NHL. We’re trying to win.

“That’s how we’re going to push this team to greater heights.”

Puljujarvi has shown flashes of maybe being on his way to becoming the player he and the organization want him to be — a younger version of Hyman on the right side — but his lack of consistency and long dry patches hampered his progress and jeopardized his place here.

He started strongly last season, but his game tailed off badly (just 13 points in the final 36 games) and he slid down the depth chart.

Puljujarvi admits his confidence took a major hit and things spiralled from there. There was some speculation that he wanted out of Edmonton again, but he’s here in camp and hoping to make the best of it.

“Now we start everything again,” he said. “I’ll try to fit in where I’m good and be the best player I can be. I just need to skate well, get that going and help those good guys when I’m playing with them. When I’m in a spot to score, hard shot, top corner. Go to the blue paint and be strong. Mean.”

This time around he hopes to get on the right side of things and trend up, not break down.

“Try to be a more confident player,” he said. “I think confidence is a big thing in the NHL. You need confidence every day, every game, every play. I’ll try to be a tough guy and play with good confidence. That’s big stuff.”

The best way for somebody to get their confidence back is to train hard and play hard. By all accounts, that’s been Puljujarvi’s game plan.

With that as a foundation, things usually work out.

“Confidence is not something you necessarily start out with, it’s earned through a lot of hard work and effort,” said Woodcroft. “Part of that is being in a position to succeed. Part of that is the work that he put in. I thought he looked really good in the captain’s skates (prior to camp).

“I see a highly-motivated player who put in a lot of work. He’s anxious to show what he can do. He laid down a really good first day, now it’s on him to make sure he builds on it.”