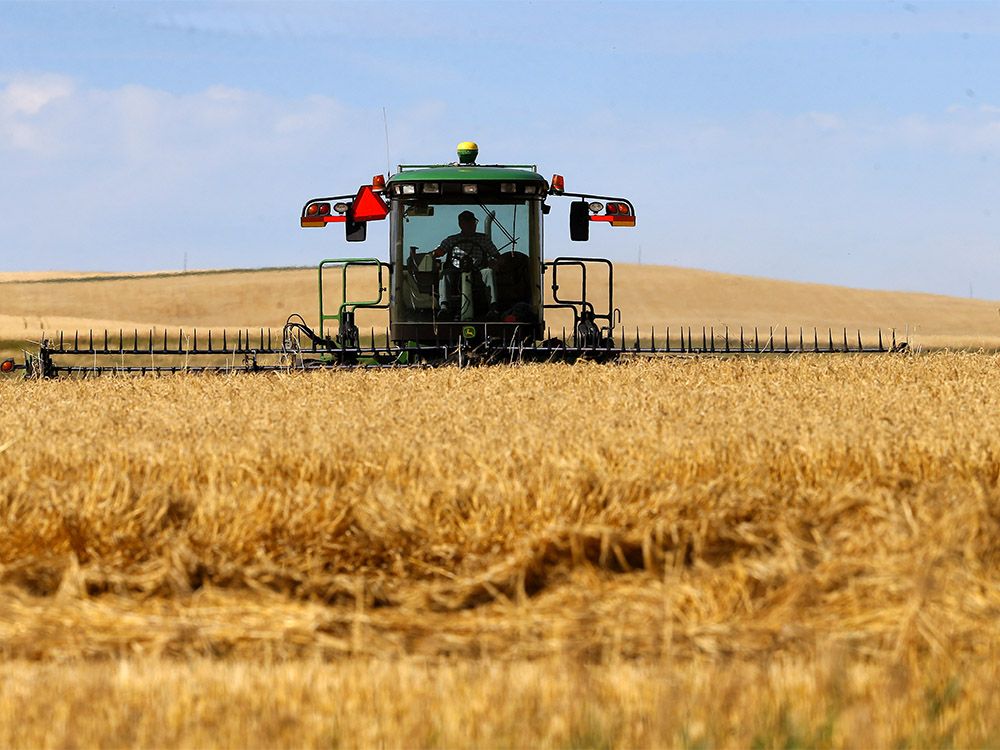 Rarely will a slightly above average crop be celebrated to the extent of this year’s harvest.

With reaping underway in Alberta, Statistics Canada released their July 2022 model-based principal field crop estimates on Monday forecasting a return to normal. It is music to the ears of farmers who were bracing themselves for the worst this spring.

A June 15 rain changed everything.

“It was almost two years to the day that we had over an inch of rain,” said Leroy Newman, 57, vice-chairman of the Alberta Barley Commission, who farms 4,000 acres of land southeast of Calgary between Blackie and High River. “We got seven inches of rain in June and it really changed our moods and the crops started coming around and then it kind of shut off in July. It got really hot and we were pretty nervous about it but we’re pleasantly surprised on the crop yields right now.”

He has already started swathing his peas and barley crops.

The bounceback from 2021’s drought has been significant in Alberta. StatsCan is projecting a 79.5 per cent increase in wheat production to 11.5 million tonnes, while harvested areas are expected to increase by 9.3 per cent to 7.4 million acres.

Canola production, meanwhile, is expected to increase by 49.1 per cent to 6.4 million tonnes as improved yields will offset a 2.8 per cent decrease in harvest acres.

These improvements, however, are against the backdrop of the worst drought in a generation or more.

On the five-year average, with 2021 removed, yields are expected to come in at just above average.

“Based on the estimates from July 31, things are looking pretty good,” said John Seay, unit head of crop reporting for Statistics Canada.

StatsCan’s report does not break down regionality any further.

The latest Alberta Crop Report, released on Aug. 23, shows the quality of crops in southern Alberta, overall, tracking above the five-year average (51.8 per cent versus 46.3 per cent) for good to excellent condition but below the 10-year average (59.6 per cent). In 2021, just 22.3 per cent of crops in the region hit the rating.

It’s not just grain-growers who are benefitting; those with livestock are also getting a reprieve. Newman, who also raises cattle, said they got one-tenth the amount of hay last year that they bailed this year. Many beef producers faced the prospect of selling breeding stock after having cattle on feed beginning last fall through the spring, and he said not all are out of the woods yet.

“I still think a lot of people are thinking that, ” said Newman. “The prices are just not holding guys into the business. … It’s just really hard because the costs are so high.”

An above average crop is critical this year with inputs hitting record levels — Newman said his fertilizer tripled in price while his fuel costs doubled. The agriculture industry has decried this as the most expensive crop in history.

However, it may not be as profitable as originally expected as commodity prices have started to level off.

He noted a drop is normally expected at harvest due to a surge of product on the market and they are still above historical averages.

Some producers did lock in crops at the record spring prices, but fewer took advantage of those levels due to the early uncertainty, and hard lessons from 2021 due to the widespread drought across the prairies.

“Anecdotally, we heard a lot of farmers were more reluctant to price a high percentage of their crop going into this year than they were going into 2021,” said Steve. “I think a lot of farmers found that grain companies weren’t always as flexible as they had been in the past in terms of buyouts on contracts.”

The next big challenge for the ag sector will be ensuring the crop can get to ports by rail, which has proven to be an issue since 2014, said Steve.

“There’s a severe shortage of containers,” he said. “We’re just really trying to put the heat on the two major railways to ensure they have the resources in place to move bulk product to market because there’s going to be a big crop hitting the system.”