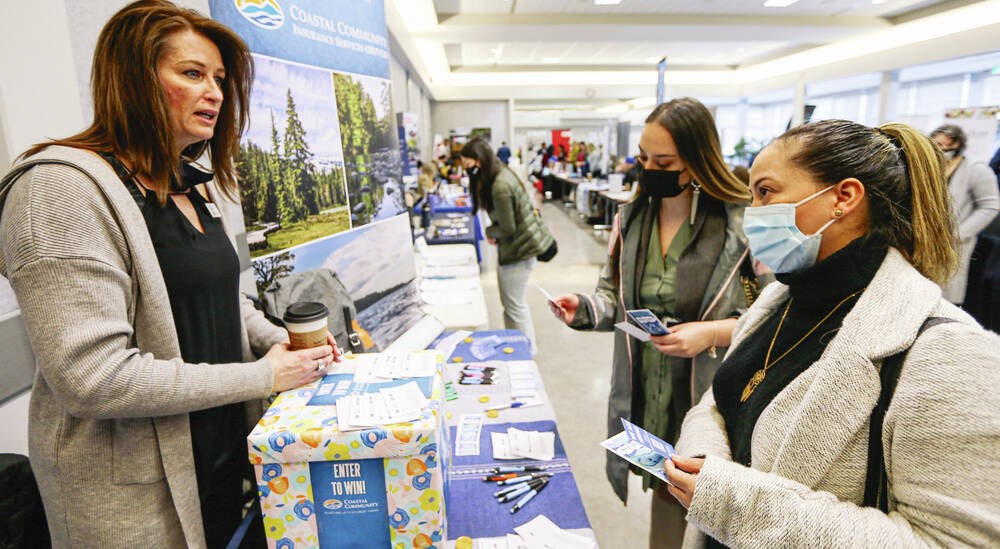 She says she would like to be a barista, maybe, or a server, which is what she did back home on the Shuswap last year .

Hold on, you want to tell her, don’t limit your options. There are 63 local employers at Monday’s hiring fair at the Student Union Building, and at this point it looks like a lake with more boats than fish.

“Economy-wide, everybody is hiring,” says Bruce Williams, the CEO of the Greater Victoria Chamber of Commerce, which, along with the university and its student society, staged the event. He casts his eyes over a room that contains not just representatives of the usual suspects — hotels, restaurants, construction, tourism-related businesses — but also ones you wouldn’t necessarily see at events like this: banks, charities, even the security firms that have seen demand increase during the pandemic.

Many offer inducements just to get the students to stop at their tables: B.C. Transit has logoed bags, Butchart Gardens is dangling hand-made truffles and Truffles Catering is offering cookies.

Yes, the challenges employers saw last summer, when a lack of staff kept ferries tied up and caused eateries to pare their menus and hours of operation, are still with us.

A confluence of factors is driving the labour shortage, and not just in the kinds of jobs students would normally be expected to fill. Some sectors are feeling the lack of immigration during COVID.

There’s a global competition for skilled workers. Baby boomers who held onto many of the best jobs for so long are now deciding they don’t want to go back to the office after all, creating opportunities for those lined up behind them. As people move up the job ladder, entry-level posts stay vacant.

The tourists might be flocking back again, but the sector is still trying to fill the holes left by long-term employees who bolted for more stable, less pandemic-sensitive roles. After two years of working from the safety of their couches, not standing all day while being breathed on by strangers, many people only want to work from home, or want a hybrid model, which isn’t what the service ­sector offers.

Also, there simply aren’t as many young people to perform what are seen as young-person jobs. Many of the millennials who comprise Canada’s single largest cohort are hitting 40 now. Generation Z is smaller.

“This is definitely a job-­seeker’s market,” said Randy Waldie, standing behind the ­Beacon Community Services table. “I haven’t seen a market like this since 2006.” He was looking for cooks, residential-care aides, thrift store staff, licensed practical nurses, ­child-care workers, maintenance staff ….

Around the corner, Kinetic Construction’s Nicole McBride was hoping for carpenters and labourers. “Those are the unicorns.” The company is building an affordable-housing project in Ladysmith, where there is a dearth of such workers.

Not that shortages in the construction industry are either new or particular to the mid-Island. There are stories of contractors papering vehicles at each other’s job sites with Help Wanted posters.

Ron Rice, executive director of the Victoria Native ­Friendship Centre, said the jobscape is tough for non-profits like his, which generally hover at the lower levels of the pay scale, meaning the people they hire have to be looking for something other than money. “The people who come to work for us are either looking to fill their heart or gain experience,” he said.

Still, they also have to eat, which isn’t that easy in a city whose residents pay so much just to keep a roof over their heads. “I’ve had people turn down jobs after looking for a home,” Rice said. They couldn’t afford to work here.

Coast Hotel Victoria’s Heather Iverson was looking for housekeeping and laundry workers. Ideally there would be 22 of them but right now there are 10. The last four people she was scheduled to interview for jobs simply didn’t show up.

Others at the hiring fair say interview no-shows are frequent. Some applicants ask how hard they will be expected to work — not the first question an employer wants to hear from a prospective employee.

It really does feel like the years before the economic ­meltdown of 2008: more jobs than workers. Not sure they would have categorized this as a problem in the Dirty Thirties.