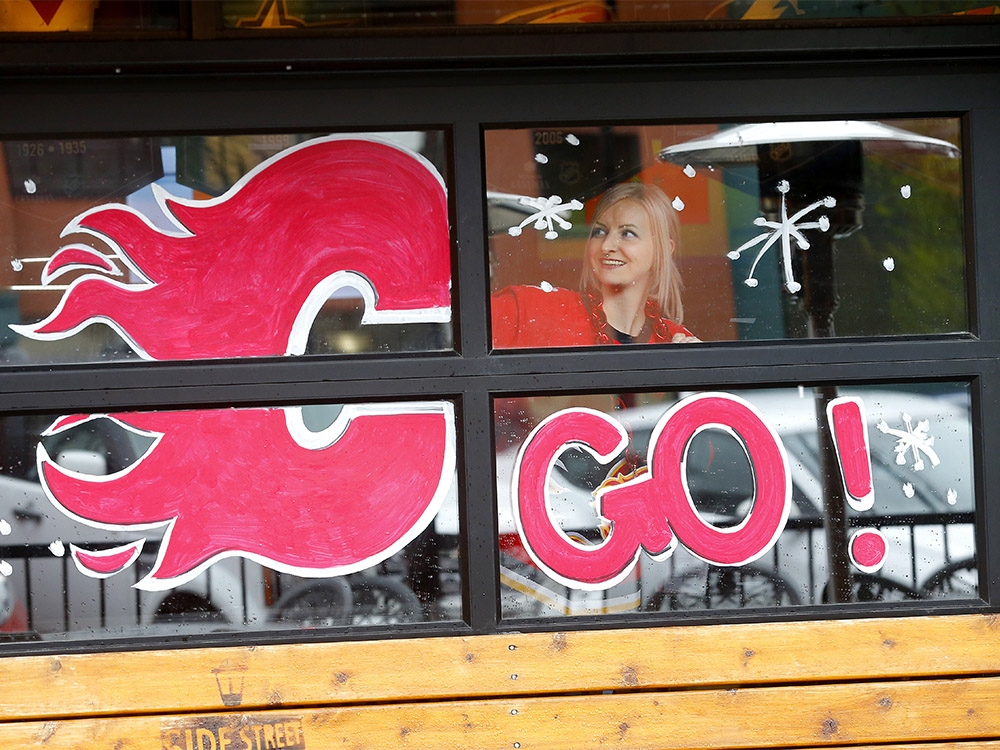 As the Calgary Flames make a run for the Stanley Cup with their best lineup in years, we’ll be there every step of the way. Follow this page for news updates, player profiles, analysis, photos and tweets throughout the playoffs.

What you need to know

Red Lot closed for Games 2 and 3, Saddledome will be open for Game 3 viewing party

After “extremely high and damaging winds” forced the Flames to close the Red Lot for Game 1 of the Battle of Alberta, the NHL club has announced that damage the site sustained means it will not open for Friday’s Game 2, nor Sunday’s Game 3.

However, the Flames will be opening the Scotiabank Saddledome for a Game 3 viewing party — the first game of the series that will be played in Edmonton.

Just like with the Red Lot, the Game 3 viewing party will require a ticket to get in. The tickets are free and will be made available online at 9 a.m. Saturday. The ‘Dome will open at 5 p.m. Sunday, ahead of the scheduled 6 p.m. puck drop.

We’re sad to announce that due to damage suffered to the site during yesterday’s wind storm & inclement weather in the forecast, the Red Lot will not be operating for Game 2.

However, we will be hosting a viewing party at the ‘Dome for Game 3! Details ⬇️ https://t.co/dinXwKNNyr

Brad Treliving had dialled this number before.

This time, the answer was different.

In what was a franchise turning point for the Calgary Flames, Treliving was able to convince Darryl Sutter to park his tractor and return for a second stint as head coach at the Saddledome.

In the 14-plus months since the Jolly Rancher was hired, the transformation of these Flames has been remarkable.

Jacob Markstrom wasn’t happy with the way he played.

But after allowing three quick goals to end the second period of the Calgary Flames’ Game 1 thriller against the Edmonton Oilers, he was as confident as ever.

Even when the Oilers scored a sixth goal to tie the game early in the third, Markstrom let his teammates know they didn’t need to worry.

“I thought five would be enough but obviously they got the sixth to tie it up right away, but I mean, the guys responded,” Markstrom said. “The guys were great in front of me. Obviously, I have to be better, everyone knows that, myself included, but to have a game like that in the playoffs and still come out with a win, that’s a good feeling.

“The guys definitely bailed me out, so now we’re excited for tomorrow.”

Bars, restaurants score big in first round of NHL playoffs

The biggest winner in the Battle of Alberta may end up being the bars and restaurants in the vicinity of the Saddledome.

Data out of Moneris examined the receipts from the food and beverage industry in Alberta’s NHL cities and saw massive growth year-over-year in sales. Further, those close to the arenas were able to cash in at a much higher rate than establishments throughout the rest of the city.

The end-of-night receipts will only get bigger as the Battle of Alberta wages on.

Pete Emes, co-owner of Home and Away Bar at 1207 1st Street S.W., said they usually see sales increase 15 to 20 per cent each round, and that’s without the Flames and Oilers doing battle. Now people are showing up earlier than before and staying later.

“They were coming in right after work, you could feel it, it was the only thing on people’s minds,” he said of Wednesday night’s Game 1, which the Flames won 9-6.

The Calgary Flames would prefer if it didn’t happen again.

The Flames are obviously pleased to be up 1-0 on the Edmonton Oilers in their Round 2 playoff series. They won’t say no to scoring nine goals again.

Seeing Connor McDavid score a goal and add three assists? The Flames definitely need to prevent that from happening again, and it’s going to take everyone getting involved.

The scoreline might have been reminiscent of some of the classic 1980s Battles of Alberta.

But the similarities end there, according to Darryl Sutter.

The Calgary Flames head coach wasn’t thrilled with the way his team played in Wednesday’s 9-6 win over the Edmonton Oilers in Game 1 of their second round playoff series.

And just because the teams combined for 15 goals, it doesn’t mean the game looked anything like those classics from the ‘80s and ‘90s.

“It was quite a bit different,” Sutter said. “Last night was the classic no-hitter. Some of you guys weren’t born then.”

‘Nothing but a positive’: The psychological impact of the Battle of Alberta

University of Alberta psychology researcher Christine Kershaw studies how groups interact with each other, including the Battle of Alberta participants.

She says Calgary and Edmonton have been competing with each other for generations and that this year’s Battle of Alberta is just the latest iteration of an ongoing contest between the two cities.

While competitions for things like infrastructure or corporate headquarters are often unrelatable or unimportant to many, she says sports provide a more tangible comparison that’s easily understood.

“I can cheer really hard for my team and that feels more like I can give something to them.”