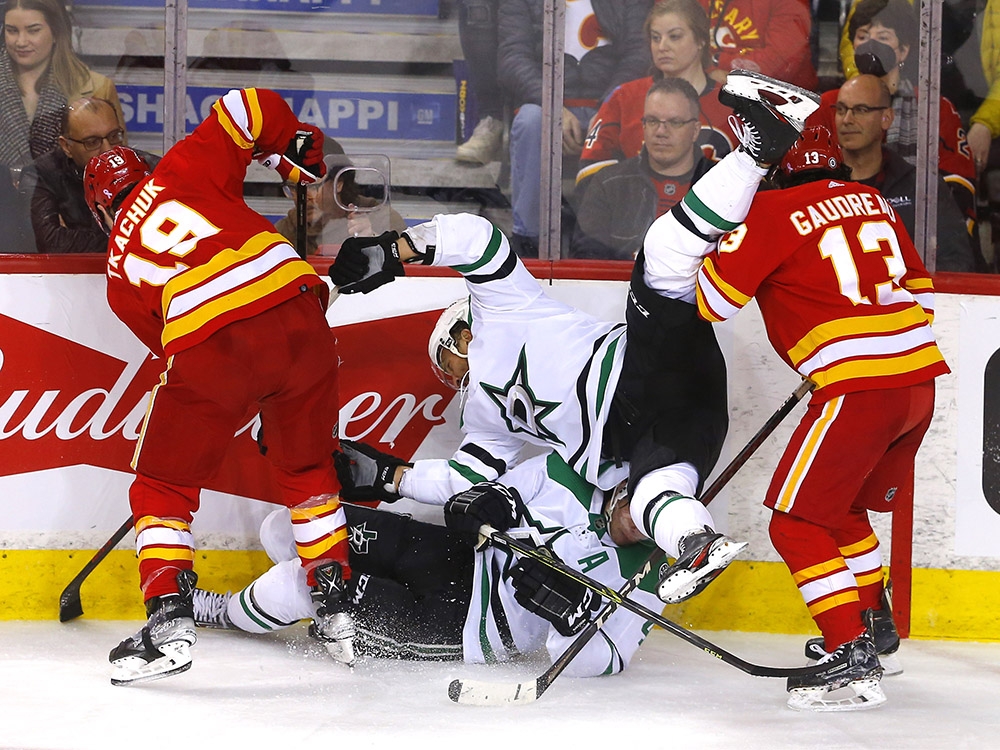 As the Calgary Flames make a run for the Stanley Cup with their best lineup in years, we’ll be there every step of the way. Follow this page for news updates, player profiles, analysis, photos and tweets throughout the playoffs.

What you need to know

Flames line combinations during final practice before Game 1 on Tuesday

‘We want to show we’re better than that’: Pain lingers from Flames’ previous flop as a favourite

As the Flames roll into the 2022 Stanley Cup playoffs, there have been plenty of reminders of their flop from three years back.

For that 2018-19 edition, however, the spring fling lasted about as long as whatever is causing that stink in the produce drawer of your fridge. A first-round ouster was sealed in just five games, with the Colorado Avalanche moving on to the second round.

Matchup: Five things to know about the Dallas Stars

Two years ago, the Flames met the Dallas Stars in the first round of the NHL playoffs and wound up losing in six games to a team that would go on to play in the Stanley Cup Final.

This week, they’ll run it back.

There are high expectations for the Flames in this year’s playoffs. By any reasonable measure, they’ll be the favourites heading into their matchup with the Stars after finishing first in the Pacific Division and earning the No. 2 seed in the Western Conference, while the Dallas crew snuck into the post-season in a wildcard position as the seventh seed.

The Flames won two of three matchups with the Stars this season, including most recently a 4-2 victory on April 21.

These Stars, though, shouldn’t be taken lightly. They’re not the easiest team to get a read on, but it was only two years ago that the organization outlasted the rest of the Western Conference Final and was playing for the Cup.

Here are five things to know about the Flames’ first-round opponent.

Gilbertson: Will a fresh perspective translate to standout performance for Gaudreau?

Johnny Gaudreau heads into this post-season with a fresh perspective.

“I think I’ve maybe taken it for granted over the years, playing in playoffs,” said the Calgary Flames’ fan favourite and superstar left-winger. “Just the way Darryl (Sutter) talks about playoffs and how hard it is to get in … Half the teams don’t make it. Looking at it, it’s kind of crazy that I have taken it for granted. But now, looking back as I get a little older, it’s exciting to be back and just try not to take it for granted.

“And when you have a team like this, we’re super excited to get there and have some fun, hopefully.”

Perhaps, that realization — a combination of experience, maturity and too many misses — will spur the 28-year-old Gaudreau to a standout performance.

Flames can finally prove themselves in the playoffs

The ghosts of playoff failures past do not seem to be haunting this year’s team.

With the playoffs finally here, the Flames finally have the chance to prove they can make noise in the post-season. At long last, they can silence the doubters who say they fold when the pressure really turns up in a seven-game series.

“This is the prove-it time of year,” said veteran Blake Coleman. “This is when the players show up, the games get harder. You can either up your game or back down. I think we have a lot of proud hockey players in our locker room, and now they have some experience to lean-on. Guys who have had tremendous regular seasons are going to have to take it up even more in the playoffs.”

The ring-leaders: Flames counting on proven winners for composure, confidence

When the Flames missed the playoffs a year ago in the NHL’s one-time-only North Division, many wondered what general manager Brad Treliving’s response would be.

Was a major shakeup required? Would he jettison Johnny Gaudreau or one of the other core forwards?

Instead, Treliving “worked around the edges,” as he often puts it. He shopped for some size and snarl. More than anything, he put a premium on guys who’ve skated in their share of May matchups and June jousts.

In particular, the Flames are counting on Blake Coleman, Tyler Toffoli and Trevor Lewis — all with extensive playoff experience.

Austin: Five things that could decide the Flames-Stars series

Playoff series have a tendency to take on lives of their own.

There’s a lot that the regular season can tell us about how this series between the Calgary Flames and Dallas Stars (Tuesday, 8 p.m. MT, Sportsnet) might shake out and what areas might make a difference in who advances to the second round.

Calgary’s Red Mile is slated for a comeback in a big way this May as Flames fans celebrate their team clinching a berth in the Stanley Cup Playoffs.

And businesses at popular post-game destinations along the stretch of 17th Avenue S.W. couldn’t be happier to welcome back the sea of red jerseys.

It’s been two long years since the Calgary Flames last made a bid for Lord Stanley’s cup, and that was during the 2020 COVID bubble playoffs that saw fans barred from attending games in person and health restrictions limiting post-game libations. The last time Flames fans enjoyed a playoff game in person at the Scotiabank Saddledome was during the Flames’ short-lived appearance in 2019 that ended in the first round when the Colorado Avalanche ousted them in five games.

With Calgary Flames playoff tickets going on sale, the team has also announced the return of the Red Lot Community Viewing Party on the Stampede grounds for all home playoff games.

The event was introduced for the team’s last playoff run and received strong turnouts. There is capacity for 5,000 fans this year.

The party will be free of charge and open to fans of all ages. The game will be broadcast on giant screens along with music, interactive stations, prizes and food and beverages.

Communication has been key to success for Flames’ top defence duo

Rasmus Andersson is a talkative type.

In the locker-room, he is constantly chirping back and forth with his teammates. During game action, as soon as the whistle blows, you know one of the opponents is getting an earful.

“Yeah, Razzy is a competitive guy and he likes to mix it up and get in those scrums and agitate a little bit,” grinned Noah Hanifin, Andersson’s partner on the Calgary Flames’ top defence pairing. “I’m usually just coming in there and trying to back him up. But it’s great. I like that bite with him.”

Andersson isn’t afraid to speak his mind with Hanifin, either. And vice versa.

In fact, both think that an open and honest line of communication has been an essential ingredient to their success this season.