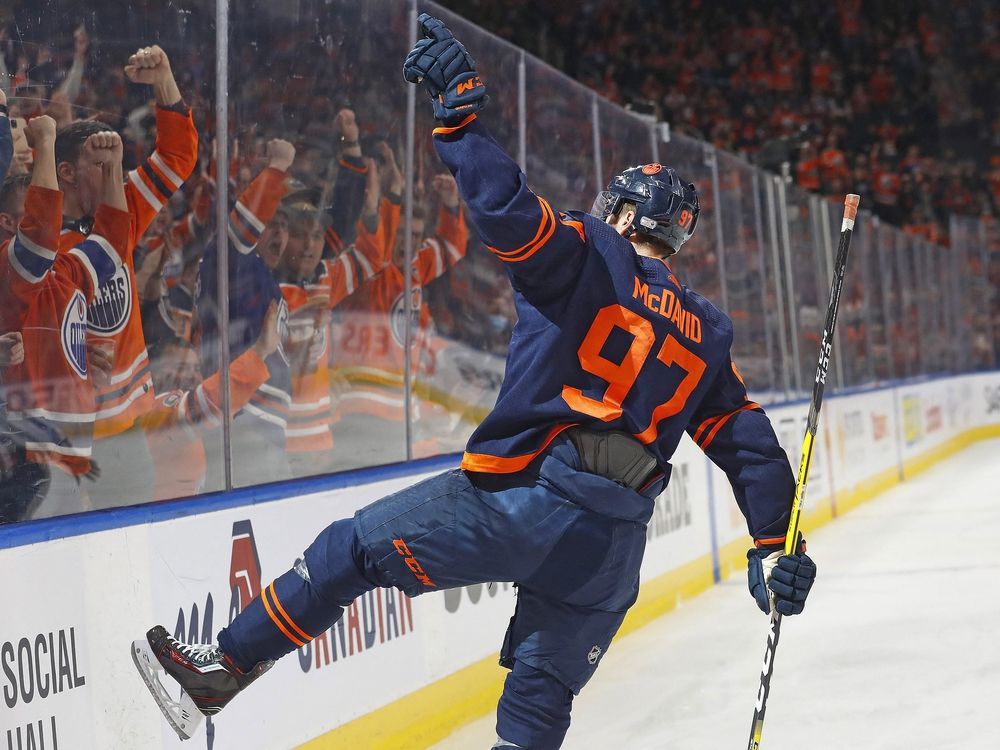 It was “Get a Goal” Night for the Edmonton Oilers against the inexperienced Arizona Coyotes in a 6-1 Edmonton win on Monday night.

Edmonton beat up on them, getting 17 Grade A shots to five for Arizona, seven 5-alarm shots to three for the Coyotes.

Connor McDavid, 7. He looked exceptionally sharp, making eight major contributions to Grade A shots. Beautiful move to start the game, taking it on the bounce from Puljujariv, then beating Arizona’s goalie Vejmelka backhand, putting it top shelf, where gramma keeps the cookies. Returned the favour with a deft vertical stretch to send JP in on partial break. He set up Drai for a 5-alarmer on the PP early in the second. He was seen smiling on the bench, an exceedingly rare sight, in the third period of this laughter of a game. A moment later, he popped a puck on the forecheck, leading to Edmonton’s sixth goal.

Jesse Puljujarvi, 8. Two excellent assists. He came out all smokestack lightning, forechecking hard, dumping Stralman with a reverse hit, popping pucks, including a battle won at the blueline and a quick lob pass to McD for the goal. He got a partial breakaway later in the first, drove a hard slapper on net. He was lost in the Red Light Zone (not covering anyone and not covering off a passing lane) on a wicked Arizona chance early in the second. Beauty diagonal dart through the slot to set up Draisaitl’s goal.

Evander Kane, 6. A wrecking ball out there. Had five hits. Strong puck protection deep in enemy territory on a shift in the second. He bowled over Keller with a hit late in the second. He then smashed through Dineen going to the net in the third, getting a penalty. Took another penalty a moment later, then got the hat trick a moment after that. The Oil killed off all three.

Leon Draisaitl, 8. His offensive game was in high gear. Hammed an Espo of a slot shot, fast and lethal, on Vejmelka early in the second. Shot a jet off the goal post with a clever wrist shot a few months later. He won the puck in the n-zone, bullied his way into the slot and fired a wicked changing-angle shot late in the second, with Hyman cashing in the rebound. He was bound to score on such an iffy team and did half-way through the third, putting in JP’s pass. “Nice pass,” Drai said to the big Finlander, high praise from the master passer himself. It was his 48th of the year.

Kailer Yamamoto, 7. Lethal diagonal dart through the n-zone to send in McLeod on his second goal. He blasted Carcone with a hard hit a moment later. He knocked a tricky rebound on his own net in the second. His hard charge opened a hole in the AZ defence on Hyman’s rebound goal.

Zach Hyman, 7. Total Eclipse of the Sun screen on Vejmelka on a dangerous shot from Drai in the first, then took it hard to the net on the PP for a Grade A jam shot of his own. Had a bad luck play on the PK, deflecting Keller’s shot past Koskinen. Pounded in a rebound shot late in the second. He took the puck hard to net for a Grade A shot in a quiet third period.

Ryan Nugent-Hopkins, 6. Quiet game, but some good work on the PK. Lost a battle leading to a wicked Keller one-timer in the second.

Josh Archibald, 5. He threw a hard hit in the first on Capobianco. Led the team with six hits in total.

Derick Brassard, 5. Not much to report in this game. Nothing bad or good.

Derek Ryan, 5. Was in on the passing sequence of McLeod’s first goal. Quiet game otherwise.

Ryan McLeod, 8. Rushed up the ice in the first, got the puck behind the net, then put it in off Vejmelka’s back. On purpose? I thought so. Great play. Not so great stick on Edmonton’s PK, allowing a cross-ice dart to Keller on the first Arizona goal. Shot himself out of a cannon early in the second, streaking up ice to take a diagonal Yamo dart, split the defence then deke out Vejmelka. He got an assist, setting up Barrie’s one-timer blast in the second, with Foegele puming in the rebound.

Warren Foegele, 6. Jumped on a delicious rebound to score in the second. Not much to report otherwise.

Darnell Nurse, 7. Had a solid game, with little trouble on defence. He made a pass on McL’s goal in the first. Allowed a slot pass for a dangerous chance by Travis Boyd early in the second.

Cody Ceci, 6. Almost deflected in an outside shot early in the game, but made the save himself. Solid enough game otherwise.

Evan Bouchard, 6. He moved in a few times from the point for hard shots. Kept it safe and simple otherwise.

Duncan Keith, 6. Looked good out there. He broke up a few Arizona odd man rushes in the second, but allowed a horizontal dart across the slot to Keller for a 5-alarm shot in the second.

Brett Kulak, 7. Skated well and kept a clean sheet, not one major mistake on a Grade A shot against at even strength.

Tyson Barrie, 7. He pounded the puck on net on Foeg’s rebound goal. He, Drai and McL tied for a team-leading six shots on net. He also kept a clean sheet, making him the Oil’s best d-man on the night. He even played two minutes short-handed.

Mikko Koskinen, 7. Very easy game, facing just 5 grade A shots, only three of them of the 5-alarm variety.  But he got the job done. Big save on point blank slotter Boyd early in the second, then looked even better thwarting Keller on a one-timer.