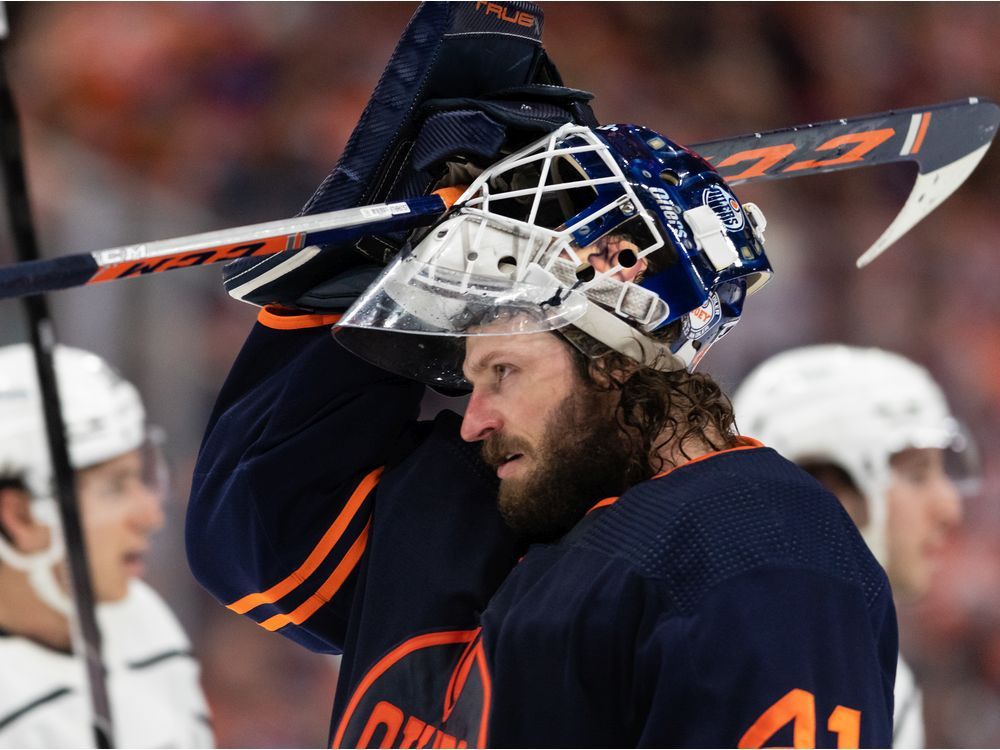 The Edmonton Oilers played well enough to win, but made enough huge mistakes to lose, most notably a Mike Smith turnover in the third period that kicked off a Sequence of Pain of playoff game-losing proportions.

The mistake led to the fourth Los Angeles goal in a 4-3 Kings win that saw the Oilers battle back to tie it after being down 2-0 and 3-2.

Meanwhile, Jonathan Quick came up big when needed in the L.A. nets.

It was Edmonton’s seventh straight playoff loss, all of them one goal games.

In total, both Edmonton had 17 Grade A shots in the game, L.A. with 16, with nine 5-alarm shots for the Oilers, eight for Los Angeles.

Connor McDavid, 8. Great game, with major contributions to nine Grade A shots. His hard charging drew an early penalty, after not drawing one in the entire Winnipeg series last year. He fed Kulak for a 5-alarm break-in late in the first, then stole a puck to set up Kane for a harpoon shot, and capped it all off by doing what a captain and a superstar should and must do, going end-to-end, beating every King out there and whipping in Edmonton’s first goal past quick Quick. The testosterone levels in the downtown arena must have been the charts after that rush. He fed Drai for his power play snipe. He then made a stalwart defensive stop in the slot, backchecking fiercely. Broke in on a breakaway early in the third. He burst down the wing to fire a horizontal dart for a Yamo one-timer in the third.

Evander Kane, 6. Diligent backcheck in the first to thwart an odd-man L.A. burst but he would have done well to stick with Moore on L.A.’s first goal. Harpooned the puck on net off McDavid’s feed late in the first. He won a lot of board battles. He led the team with seven hits.

Jesse Puljujarvi, 3. He seemed off. He was not sharp with the puck. He played just 7:52. He got tripped up, with no penalty call, allowing the odd-man rush and goal against for L.A.’s third goal. It wasn’t his fault and such is playoff hockey, painful at times.

Leon Draisaitl, 6. He got little done in the first but then fired off two straight hard shots on the power play early in the second off feeds from McDavid and RNH. He was all cool and cold alligator blood picking the corner on his second period power play shot. He drew a cagey penalty, grabbing onto to Byfield’s stick. But aside from the big goal he got little done at even strength, with not one major contribution to a Grade A shot there.

Zach Hyman, 7. Some monumental hustle plays this game. His dogged o-zone ragging of the puck got a penalty call in the second. Some huge effort to rush puck and win puck on backcheck in the third. But he could not score or assist.

Kailer Yamamoto, 8. One goal and an assist in a great game. Mixed it up with big Iafollo early on, dragging him to the ice and taking an ill-advised penalty. Aggressive play to jam the puck free for McLeod’s early breakaway. He made a great tip to score Edmonton’s second goal, then won a board battle along with RNH to kick off the Virtuous Cycle on Drai’s second period power play snipe. He hammered Edler off the puck to get his own slot shot. He broke in hard and almost scored on a short-handed chance in the third. Was close to lighting the lamp again on McD’s pass and his own harpoon.

Ryan Nugent-Hopkins, 5. Needs to do more at even strength. He allowed the pass out from behind the net on the Sequence of Pain leading to L.A.’s first goal. After setting up a few others for shots, he got his own 5-alarm shot off a Drai feed in the second. Good on special teams, not much to show for at even strength.

Derek Ryan, 5. He tipped a shot then jammed the rebound on net in the first. Skated and worked hard.

Warren Foegele, 5. He threw a big hit early in the game. He got beat off the boards in the third, forcing Nurse to take a desperation holding penalty. But followed up with some harsh hits on Edler and Maatta.

Ryan McLeod, 6. Good forceful work on early LA power play. He broke in hard and fast for Edmonton’s first Grade A shot eight minutes into the first. He kicked off the Virtuous Cycle on Edmonton’s second goal with a face-off win. He failed to cover Byfield in the slot on a nasty shot in the third.

Zack Kassian, 6. The crowd was playoff loud and Kassian delivered what he was supposed to. Threw a thundering hit on Spence half-way through the first, then blew up Byfield with a hit in the third. He threw six hits in total.

Darnell Nurse, 4. Super rough start to this one. He looked like he was playing at about 50 per cent, unable to get any burst in his skating. He got caught out of position and looked rusty on the first play of the game, leading to a tough shot on Smith. He got caught in the Red Light Zone — covering no one and blocking no passing lane — on the first L.A. goal. A moment later he allowed a dangerous slot tip shot, giving too much gap on his man. But then he drilled Athanasiou with a wicked hit. Solid short-handed shot block on Kempe early in the third. He got a dangerous slot shot off a McD feed late in the game.

Cody Ceci, 6. He took a professional foul penalty on Kempe to deny him a breakaway chance late in the second. Deflected puck on own net, then was slow to shooter on 5-alarm L.A. chance by Iafollo early in third, but was otherwise solid all game.

Evan Bouchard, 6. He came out a bit snarly and got off a few good outside shots in the first. He broke up a dangerous Kings PP sequence in the second. Great vertical dart to send Yamo on his third period break-in. He fired nine shots at net, three of them hitting the target.

Duncan Keith, 6. He moved the puck fast and smart all game. His turnover into the slot early in the game led to two nasty Kings shots. Put the puck at net hard and true on Yamamoto’s goal. He slashed away a Byfield shot.

Brett Kulak, 7. He fired a 5-alarmer in tight in the first. He kept a clean sheet at even strength, not one major mistake on a Grade A shot against.

Tyson Barrie, 5. Like his goalie, he got fooled on Moore’s pass out on L.A. second goal. It was his only major mistake but it was a big one. He was sharp on the power play, tho, making many fine passes.

Kris Russell, 5. His rim around the boards kicked off the Sequence of Pain on L.A.’s second goal, but he was otherwise solid in limited minutes.

Mike Smith, 3. A high event game, to say the least. Did so much so well, but one brutal error in crunch time lost his team the game, for which he gets docked three full grades. He came up big on the first shot of the game, an outside scoring chance shot where his d-men had abandoned him, fortunately to slow-moving, iffy-shooting Alex Edler and not a sniper like Kopitar or Kempe. Then came a brace of great saves shorthanded, Smith thwarting a deflection off Moores’s skates and a close in chance for Lizotte off a rebound, both of them 5-alarmers. But he got beat on a lowhigh passing play with a blistering shot by Moore, and he got fooled, going to the wrong side of the net on Moore’s brilliant backhand centering pass to Iafollo on L.A.’s second goal. He got beat by an nasty high slot one-timer by Lemieux. Redeemed himself with a huge stop on Kempe’s power play harpoon. His weak clearance almost saw him as a major goat but he hustled back to stop Iafollo’s tip shot. Gargantuan saves on Iafollo and Byfield in the third. Yet an even more horrible turnover in the third but somehow he scrambled back and stopped Iafollo’s shot, but could not stop the outside shot, which looked to deflect in off Danault’s body.

COVID meltdown: The crisis is over but what can we do about the lingering rage?

McCURDY: Watch out for Danault line