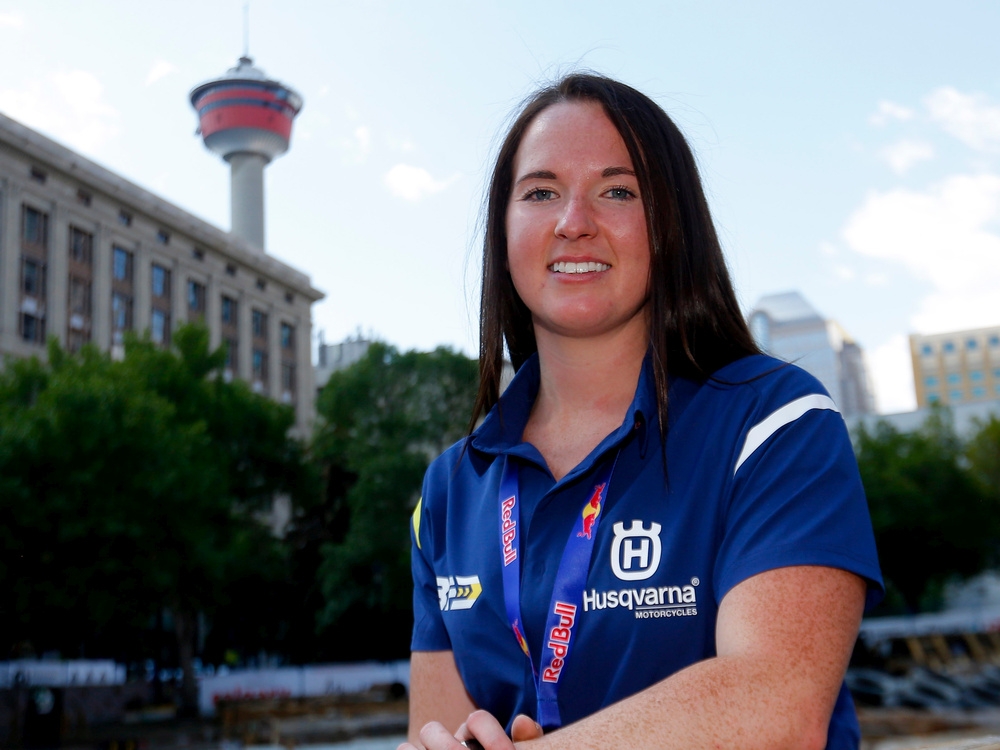 And in her daily routine working full-time in a local motorcycle dealership.

The life, it seems, is pretty near 24/7 for the Calgarian.

So it was no surprise that she was front and centre for the 2022 Red Bull Outliers motocross event over the weekend.

Pechout was among the 250-odd competitors revved up for the two-part tour stop of the FIM Hard Enduro World Championship, a new and exciting off-road motorcycle series that unites the most unique and well-established events.

And she was out to better her third-place performance of last year among 130-some — male and female — amateurs entered in this summer’s field, which competed Saturday on a closed-course full of obstacles in the city’s Olympic Plaza in front of 8,000 fans on hand, before wrapping up Sunday in the natural setting of the Canadian Badlands northeast of Brooks.

“Motorcycles have been involved in my life basically since I can remember,” said Pechout, who was learning how to ride bikes at the tender age of two. “We spent every weekend riding or racing, and it was something that I did as a family. As I got better and as I got older, I really just fell in love with it and wanted to race more and more. So I started racing more international events and doing more high-level races.”

Quite frankly, Pechout can be considered a pioneer because of it.

“You can say that about her as well as a couple of other key ladies in the area,” said fellow racer Shane Cuthbertson. “Other women see how much fun they’re having in the sport, and they want to be involved with it.”

Indeed, it certainly is tons of fun for Pechout, who sported a big smile hours ahead of this year’s Red Bull Outliers while helping Friday to promote the event at Olympic Plaza.

Then she put on her game face Saturday and made her way around the Culbertson-designed course twice before the race was decided, finishing in fourth position of her heat.

“It’s definitely very challenging,” said Pechout, in talking about the plaza track of about a dozen obstacles comprised of logs, tires, ramps and stumps. “The difficult thing they have to do with it this year with Red Bull being part of FIM Hard Enduro World Championship is they have to find a fine balance between the course being hard enough for the pros but easy enough for the amateurs to get through.

“That being said, a lot of these obstacles are really large, and having 14 people riding at once on this closed course means your line selection is a little bit less. So it’s just very crazy — some of the obstacles are massive and are a concern, but it’s the (amount of) people that’s more the problem.

“You can be ready for the next obstacle and then you have a bike and a body coming at you from all different directions.”

Motocross isn’t for the feint of heart, to be sure.

And this tour stop tested more than the racers’ meddle.

Their overall skills were challenged with, first, the obstacle course — a sprint, given races lasted just six minutes — and second, the Badlands trek — a marathon in that racers were riding for hours in pursuit of personal success.

“You’ve got to pull out all your good cards,” Pechout said. “Saturday, actually, I would almost argue is a little bit more important, because there’s so many racers that you want to be able to qualify for a (Sunday start-)gate a little closer to the front.

“So if you’re in the very back (Saturday), that means that you’re one of the last people getting to the obstacles out in the Badlands. So it’s really important to make sure you’ve finished really well on Saturday to help you with the start on Sunday.”

A fantastic second lap in Calgary moved her briefly into first place in helping her finish top four in qualifying for the event’s second day in the Badlands, where she expected to put on her best effort of the weekend.

“The Badlands I look forward to more just because it’s more my style of riding,” said Pechout, an assistant manager of BFD Moto after graduating from SAIT’s business and accounting program. “In the endurocross portion in Calgary, it’s really easy to just tip over and then get passed really quickly because it’s such a short race and it’s hard to regain that time again. So you can go from first to last place in a matter of one obstacle.

“But it’s a two-hour length event in the Badlands, and there’s ways where you can make up a little bit of time.”

She did, climbing back onto the podium — again with a third-place finish.

That confidence from a year ago was something to lean on in equalling her mark over the weekend.

“I’m just always hoping I that can finish the race because it’s very challenging. But most of all, I’m just happy to be here and be able to line up and compete.”

Manuel Lettenbichler was crowned the 2022 Red Bull Outliers champion in the pro class, finishing the Badlands track in 140 minutes, 14 seconds.

Lettenbichler’s time was six seconds better than runner-up Trystan Hart and nearly four minutes ahead of Mario Roman. After an excruciating race, Red Bull KTM Factory Racing’s Lettenbichler, edged out the Canadian favourite, Hart, in a dramatic finish to take the title.

“So stocked to have won here in Canada,” Lettenbichler said. “The race was unbelievable as we battled right to the end. Trystan raced so well along with all the guys making it super intense.”

Throughout the race, it was a neck–and–neck battle between the Canadian and Lettenbichler, as they battled right to the final seconds of almost three hours of racing.

“I can’t event count how many times we went back and forth,” Hart said. “It was a though battle and probably one of most insane I had in a long time. We had no time to rest for the whole duration of the race. For the first stop of the FIM World Championship in Canada, the fans had a good show, and you can’t ask for more than that.”

Rounding out the top five among pro racers were Taddy Blazusiak and Graham Jarvis.

Lettenbichler goes to the finals, leading the overall standings. This win brings him that much closer to becoming the second rider ever to win a world title in the FIM Hard Enduro Era. The overall winner will be decided after the eighth and final event, the 24MX Hixpania Hard Enduro held in Aguilar de Campoo, Spain.