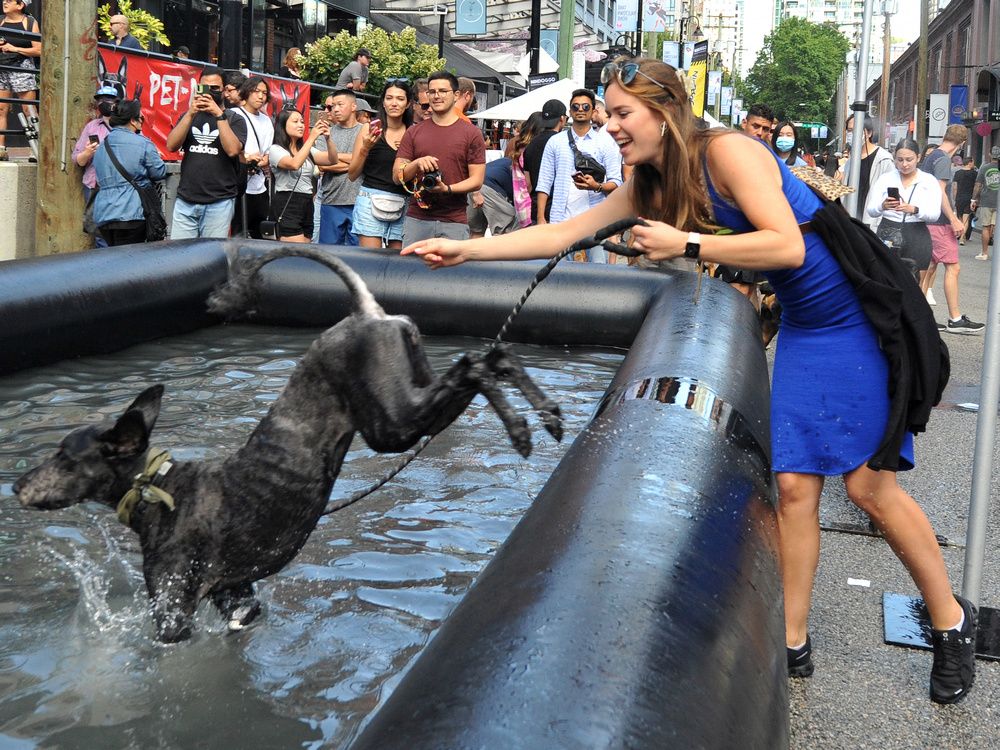 On Sunday, hundreds of canines showed up to Pet-A-Palooza to scarf down free treats, splash in the doggie pools, do yoga and compete in Wiener dog races

“It was a big shift,” said Powell. The couple now have seven Great Danes, and their event productions are focused on four-legged partygoers. On Sunday, hundreds of canines showed up to Pet-A-Palooza in Yaletown to scarf down free treats, splash in the doggie pools, do yoga and compete in Wiener dog races.

The annual festival, which has expanded over the last decade to Calgary, Victoria, Vancouver and Scottsdale, Arizona, benefits the Just Love Animal Society and aims to educate dog lovers on everything from holistic health remedies to safe and ethical dog adoptions.

“Pet ownership is up 40 per cent across Canada since the pandemic,” said Powell. “People were lonely, and a dog brings out the best in people.”

When choosing a dog, Powell recommends selecting a breed with a personality that matches your own.

Kari Richardson, who attended the event with her wiener-chihuahua cross safely nestled in a tote bag, admitted she and Frankie-Pitou are more than a little alike. “She is calm, loving and a bit of a princess — just like me.”

Theirs was an online love affair. Richardson had lost a beloved dog a few years earlier. Working from home during the COVID-19 pandemic, she was ready to adopt again. But the pandemic had caused a surge in adoptions.

“All the dogs in Vancouver were gone,” said Richardson.

Then she saw a photo of Frankie-Pitou online.

“That was it,” said Richardson, who went to Kelowna to pick him up. They’ve been together ever since.

Adam Beaulieu and Nicole Tapia brought their two French bulldogs, Zeus and Bonnie, to the event. Zeus is new to the family, adopted from a friend who could no longer care for him. The couple said that the laid back ‘Frenchies’ are a good fit.

“They are a lot like us: easily manageable,” said Beaulieu.

The Frenchies are also headstrong. Bonnie can get a little huffy when Tapia tells her no.

“She shrugs and sighs,” said Tapia.

Both like to clamber into laps for some Netflix.

“We each get one of them, and a couch,” said Tapia.

Pauline Huynh, said her four year old pocket Pit Bull Kilo is calm, loves to cuddle and is bilingual, just like her.

“He speaks Vietnamese, he doesn’t bark or snap and loves to give kisses.”

Although Kilo looks a little intimidating, Huynh said he is a softy at heart.

“If you cry while you are watching a move, he senses the tears and comes and licks them off your face.”

Dante, a 10 month-old Great Dane, was a perfect fit for her mellow lifestyle, said Aspara Telwatte. She had always wanted a Great Dane, for their beauty, elegance and calm personality. But she has to watch out when she is preparing food. Dante is already tall enough to rest his head on a table.

If you have seven Great Danes, like Illingworth and Powell, things can get a little crazy at home.

It’s also something they wouldn’t trade for the world.

Although Floyd has passed on, his legacy lives on in the event that brings dogs, and their human counterparts together.

“Dogs give you unconditional love. We wanted to give that back,” said Powell.