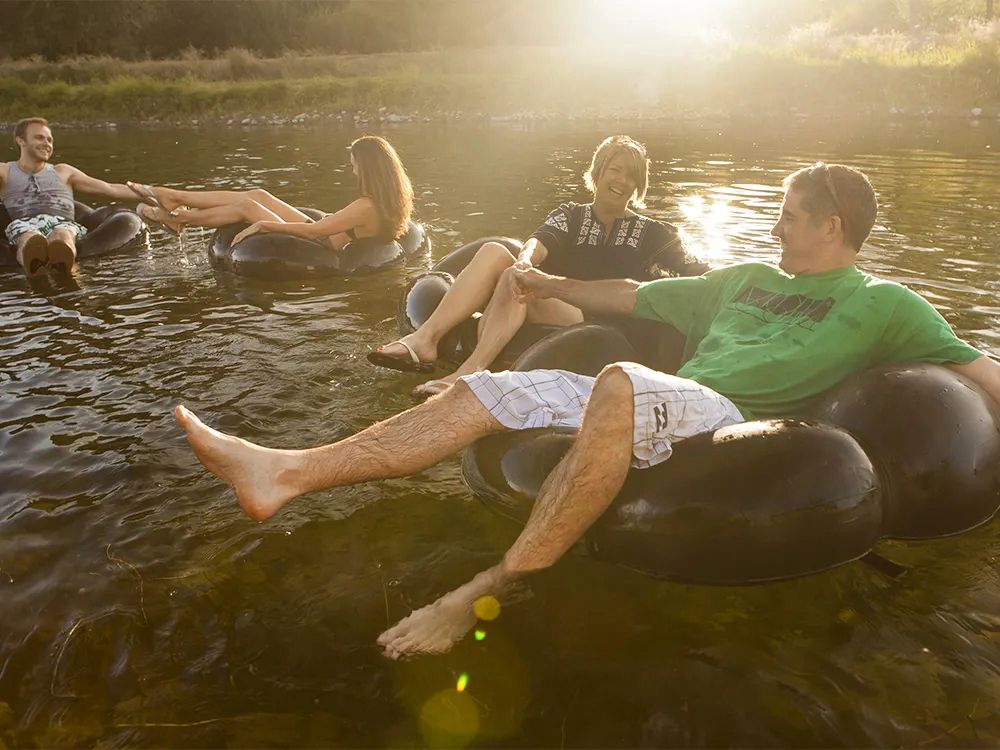 Gosh, it feels good to park the car, step outside and just . . . breathe. To inhale the scent of pine and sun-baked earth and the delicate fragrance of peach blossoms. To feel the tension leave your shoulders. To simply move.

Penticton is a good place to do just that.

This summer, the Okanagan city is encouraging visitors to travel “Fuel Free …Almost.” In other words, they think you should explore the city and the surrounding area (mostly) by foot, pedal and paddle.

Penticton is rare in that it sits on an isthmus between two lakes. Only seven kilometres separate Okanagan and Skaha lakes, with the city tucked in between.

Surrounding the city are hills for hiking, bluffs for climbing and trails for biking — as well as some 40 wineries for sipping. And the city’s compact size makes it ideal for meandering from funky boutique, to lively brew pub, to sandy beach, to restaurants that serve the best of local ingredients.

There are, for starters, two beaches, one on the Okanagan Lake side of the city and the other on Skaha Lake, and it only takes about an hour to walk between them.

Skaha Lake’s beach is a little more chill and family friendly, but Okanagan Lake’s beach is closer to downtown, the Saturday farmers’ market (considered by many to be the best in B.C.), the iconic giant peach (where you can grab an ice cream) and the SS Sicamous, an old stern wheeler that has come to rest on the beach as a museum and event venue.

Wander into the city centre and explore the many boutiques, craft breweries, restaurants and cafes.

Or, if you want to burn a few more calories before dinner, head to the hills and hike Munson Mountain or the Kettle Valley Rail Trail, a historic railway turned hiking/biking path that is part of the Trans-Canada Trail.

The Kettle Valley Rail Trail is one of the most epic — yet accessible — places to ride a bike anywhere in Canada. The decommissioned railway runs 660 kilometres from Hope to Castlegar, and has been converted into a recreation trail network with sections that include a series of historic trestles that stretch across deep, dramatically beautiful Myra Canyon.

The section from Penticton to Naramata is the best developed and most accessible. Because it’s an old train track, it’s almost flat, making it easy to bike even if you haven’t hopped on your 10-speed in a while. Or make it easier by renting an e-bike.

If you crave a gnarlier experience on two wheels, there’s some epic single-track riding amid the ponderosa pines and rocky bluffs of the Three Blind Mice area or up Campbell Mountain.

Rent a stand-up paddleboard and drift serenely on the still waters of either lake. Hop into a kayak and explore the coves and beaches along the shoreline.

Or do like the locals and grab an inflatable floatie and spend an afternoon tubing lazily down the channel that connects the two lakes. The channel was created in the 1950s to control flooding and water flow between the lakes; today it’s one of the city’s most popular places for having fun.

You can, of course, bring your own flotation device, but there are companies that rent them and at least one, the Indigenous-owned Coyote Cruises, also provides a shuttle service once you’ve finished the route.

But what about the “almost”?

Penticton is surrounded by some 40 wineries, including one right downtown (TIME Winery), most of them family-owned operations. You will almost certainly want to visit a few, sample the most recent releases and stay for lunch or dinner.

Admittedly that’s not so easy to do by foot or on bike, especially if you plan to purchase wine along the way. So you may need to go “almost” fuel free by using the services of one of several local tour operators or shuttle services.

Among them is a new hop-on, hop-off service that’s rolling out in May — Grape Savvy Trolley’s vintage-style buses will run a daily circuit between Penticton and the village of Naramata, stopping at wineries along the way.

Doesn’t that make you feel like you can breathe a little easier?

Penticton’s vibrant food scene features everything from the high-end restaurant at Poplar Grove Winery to casual brew pubs such as Bad Tattoo and Cannery Brewing.

Visit The Hooded Merganser at the Penticton Lakeside Resort for elegant but hearty fare, much of it straight from the rotisserie, and enjoy the city’s best lake views.

Pick up fresh, flavourful, picnic-ready soups, salads and sandwiches at Brodo Kitchen and The Bench Market.

And on Saturday mornings, graze on dumplings, samosas and other savoury bites at the famous Penticton Farmers’ Market — and be sure to swing by Dana Ewart’s stall for her exceptional breads and pastries.

For an affordable nine-hole par 3 course that everyone in the family can enjoy, check out Pine Hills Golf Course. The course is set on a plateau just outside of downtown Penticton and offers incredible views of the city and surrounding landscape. Don’t sleep on the golf carts here, either; they can be rented for $15 (valid driver’s license and deposit required).

The Penticton Lakeside Resort & Conference Centre is handily located right on the shores of Okanagan Lake, just a few steps from downtown. The property’s newer West Wing (actually a separate building) is a sleek, modern boutique hotel within the hotel.