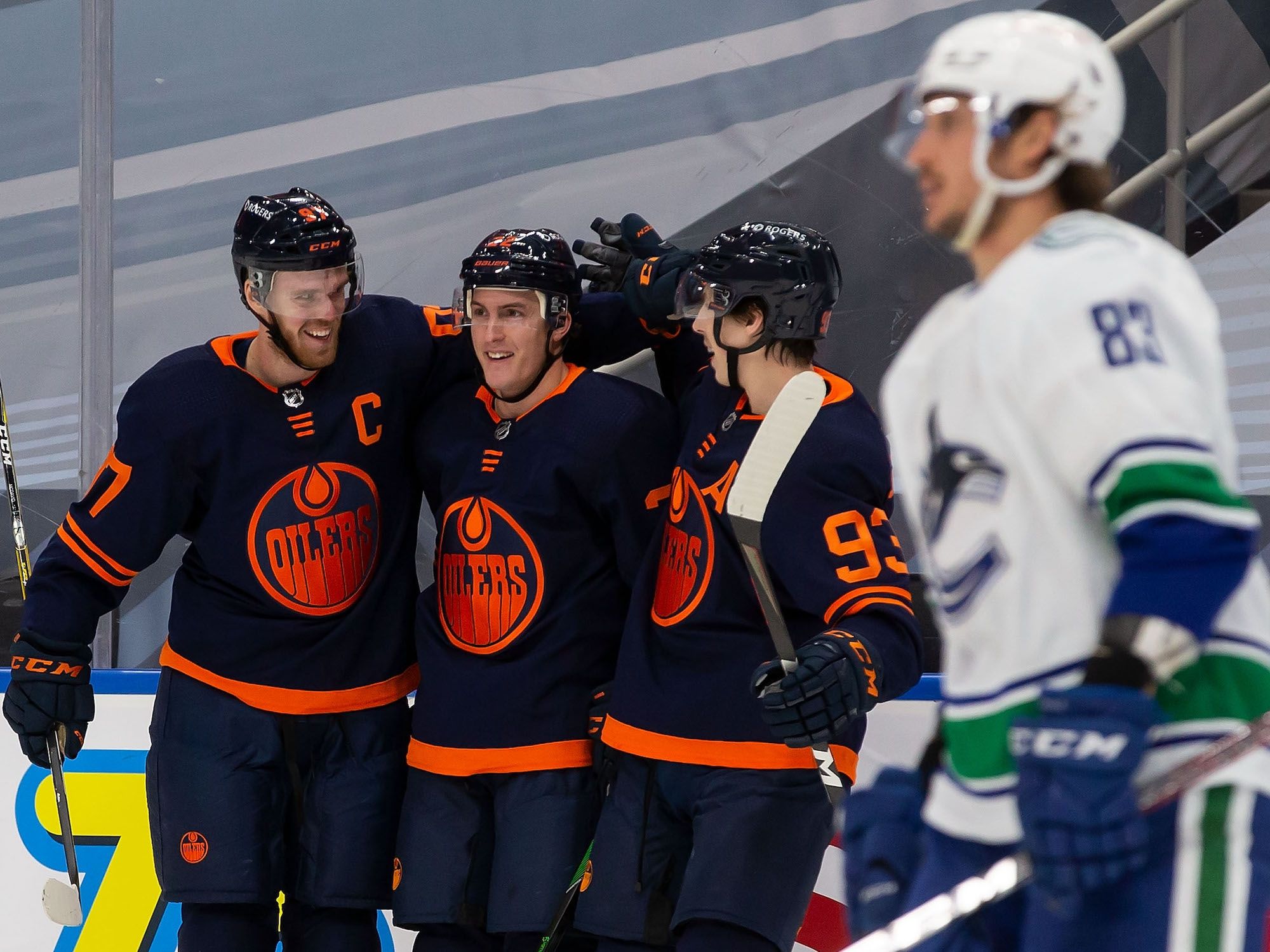 Remember the good old days before the salary cap era? Fans were free to root for a player on their team without feeling the constant need — nay, compulsion — to always factor the guy’s cap hit into the equation. What used to be “I like Bobby, he’s a good guy who helps the hockey club and is easy to root for” now gets run through the filter of “yeah but look at his cap hit, is he worth it?”

Tyson Barrie of the Edmonton Oilers seems to be such a player. No matter what kind of game he brings on the ice, or off it for that matter, there always seems to be a massive line-up of observers and pundits who value his $4.5 million cap hit more in terms of how it might be filled with another asset/s than for anything Barrie does himself. “He’s too pricey for a third-pairing d-man” … “he’s a luxury the Oilers can’t afford”… “Evan Bouchard makes him redundant” … and so forth.

With the Oilers facing a cap crunch this summer, the focus of many armchair GMs once again turned towards Barrie. Moving him out seems to have become the prevailing wisdom among many keen observers whose opinions I respect. Which doesn’t mean the same as “agree”. As a fan of Tyson Barrie the player and the person, I choose to play devil’s advocate and make the case for keeping him around.

The top of the roster is locked in to long term deals that soak up close to 2/3 of the cap for just 7 active players. RFAs Jesse Puljujarvi and Kailer Yamamoto are both on the path towards arbitration and well-earned raises of their own, so something’s gotta give.

The logical choices are Barrie and LW Warren Foegele (who we will review in a future post). Both are useful though well-compensated players who fall into the $2.5 – $5 million range. If the Oilers were able to trade either or both, could they be adequately replaced by lower-cost options? If yes, such a move/s could go a long way towards resolving Holland’s current cap crunch.

Tyson Barrie arrived in Edmonton on the second day of free agency in 2020, when Holland reallocated the cap budget he had set aside to pursue netminder Jacob Markstrom and instead signed the twosome of Mike Smith and Barrie within minutes of each other. Long a coveted player in this town when he used to rip up the Oilers as a member of the Colorado Avalanche, Barrie had found himself the odd man out in the Mile High City with the emergence of wunderkind Cale Makar. After playing out the final year of his contract in Toronto, Barrie saw Edmonton as an excellent fit for his skill set and signed a 1-year deal for $3.75 million. Then after a successful first year in this city, he signed a 3-year extension at $4.5 million the day free agency opened last July.

What has he brought to the table during his (first?) 2 years in Edmonton? Let’s review:

Barrie’s 48 points in 2021 not only led all NHL rearguards, they were the most by any Oilers defenceman since Sheldon Souray posted 53 way back in 2008-09. More impressive is the fact that he produced those numbers in a COVID-shortened 56-game season.

Over the 2 seasons combined, Barrie’s 89 points ranked 10th in the NHL.

Barrie joined an already dominant unit in Edmonton that had just lost its point man in the injured Oscar Klefbom. After a brief adjustment period for a right-shot point man, the unit kept right on producing. Obviously much of the credit is due to forwards Connor McDavid and Leon Draisaitl in particular, but Barrie proved to be an excellent fit. Roaming from one side wall to the other, he always seemed to be in position directly behind the puck to provide support for even a no-look back pass, and excelled at distributing the puck from there.

Barrie’s 44 powerplay points rank 6th in the NHL over that time. His 6.54 powerplay points per 60 rank #5, behind a handful of guys you may have heard of before: Victor Hedman, Adam Fox, Roman Josi, Cale Makar. Those 4 guys account for all 6 Norris Trophy finalists over the 2 seasons in question. Not saying Barrie is in their class overall, but am saying he’s pretty darn good on the powerplay. In fact, his on-ice rates of 11.16 Goals For per 60 rank #1 among all NHL d-men over the last 2 years.

At even strength Barrie is generally characterized as a puck-moving blueliner who is weak defensively. Those defensive shortcomings tended to be exposed when he played up the line-up against top competition.

That equation got changed very much for the better after the promotion of Jay Woodcroft and Dave Manson midway through the 2021-22 season. The new staff devised a rotation that saw Darnell Nurse and Cody Ceci absorb by far the lion’s share of the toughest competition, while the other pairings thrived against lower-tier opponents. By ice time and competition they weren’t so much a well-defined second and third pairing as a 2A/2B, or 3A/3B if you prefer.

For his part, Barrie’s 5v5 goal differential soared from +23/-27 (46%) under Dave Tippett and Jim Playfair to +31/-19 (62%) under Woodcroft and Manson. He followed that up with an impressive +12/-7 (63%) in the playoffs. Cap imperatives notwithstanding, those are pretty decent goal shares to be shipping out of town.

It helped that Holland was able to acquire defenceman Brett Kulak who proved to be an excellent fit as Barrie’s partner. Indeed, Edmonton’s entire bottom 4 of Barrie, Kulak, Bouchard and Duncan Keith excelled at the puck-moving aspect of the game, and all were significant outscorers under the new regime.

Keith has subsequently retired, while depth veteran Kris Russell did not have his contract renewed and no longer fits in the organization’s plans. Those moves have opened the door for younger d-men like Philip Broberg and Markus Niemelainen.

The oldest rearguard still on the roster? Why that would be Tyson Barrie, who turns 31 next week. Ceci and Kulak are next at 28.

The group has already taken a major hit in the experience department. At minimum the Oil would surely seek out a veteran to fill Barrie’s spot were he to move on.

The Oilers have precisely 3 with NHL experience in Barrie, Ceci and Bouchard (102 GP). Beyond them are a trio of “distant bells” in developing minor leaguers Vincent Desharnais, Mike Kesselring and Phil Kemp. All have promise in the long term; none is ready to step into the NHL.

One alternative being floated is that Broberg is comfortable playing on his off-side, but in this modern era of “sticks on boards” defending, that’s a tall ask of a rookie who will be plenty challenged even on his natural side.

Ken Holland is in a bit of a pickle. He’s done a fairly thorough job of “trimming the fat” on his payroll this summer, but has already used most of the newfound cap space created by the departures of Keith, Kyle Turris, Josh Archibald to bring on a new #1 goaltender and negotiate the returns of Kulak and Evander Kane with healthy but not back-breaking raises. But surely at least one painful move remains.

Will it be the trade of Tyson Barrie? Maybe so, but it says here such a transaction doesn’t come without risk. Experienced puck-moving right-shot defencemen who outscore at even strength and can backstop a high-end powerplay don’t exactly grow on trees.

Some suggest that young Bouchard is primed and ready to take over that latter responsibility, and maybe that is true. Such a promotion would, however, trigger future cap headaches when Bouchard’s contract expires in a year’s time. Some may suggest “don’t block him” but Holland’s well-established modus operandi is to give the youngsters some internal competition, typically from veterans.

To this long-suffering Oilers fan the “redundant” argument brings back lingering memories of the decade past. In moving on from useful players the organization’s approach seemed to be “we have Jeff Petry now so we don’t need Tom Gilbert anymore” morphing to “we have Justin Schultz now so we don’t need Jeff Petry anymore”, when in fact there were and are 3 defence pairings in need of a competent right-shot rearguard. The 2021-22 Oilers had exactly 3 such, and they all contributed to the team’s success. To change that formula will require a creative solution.

Belated congratulations to a pair of Edmonton hockey icons, as defenceman Randy Gregg and coach Ken Hitchcock, Stanley Cup champions both, have been formally inducted into the Alberta Hockey Hall of Fame after a lengthy wait due to COVID delays.

Both men carved a unique path to the top. Their stories are well worth telling, or re-telling in the current instance. The interested reader might enjoy this feature I wrote on Hitchcock’s remarkable story in 2019, and/or this essay on Dr. Gregg’s multi-faceted impact on this city from my prior blog Copper and Blue way back in 2009. Nice thing about historical writing: the facts of the past remain unchanged, the story ever the richer with the passing of the years.

STAPLES: Puljujarvi a weak passer who should be traded? Not so fast

STAPLES: Hats off to Holland