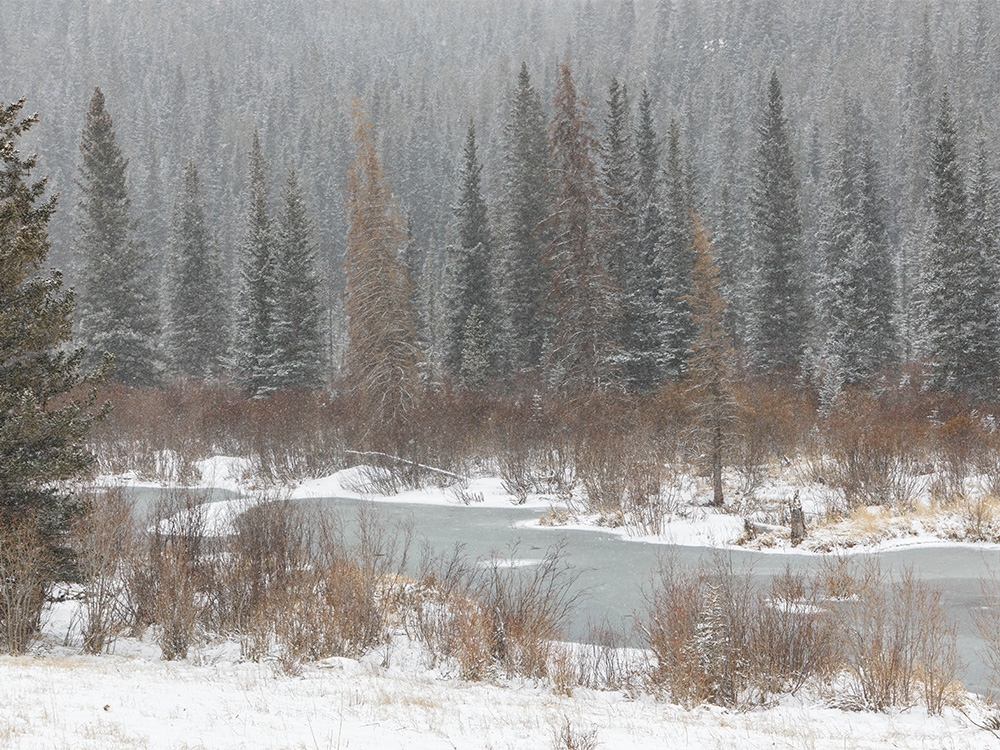 It’s that wonderful time of year when 20 C days can be followed by a week of -10 C, when the crocuses are blooming and bright one day and covered by snow the next, when new calves frolic in greening pastures and then, sometimes just hours later, huddle by their momma’s sides as a cold wind condenses their breath to frost.

This is how winter-spring-winter-winter-spring always seems to play out in dear old southern Alberta. February, cold and dry. March, a little warmer but still usually dry.

April? Why even bother trying to guess. It runs through more cycles than a used-bike shop.

So that’s why I’ve decided to designate the weather during the month of April as springter, a semi-season that’s mostly spring but still has a lingering taste of winter. Ya know, warm, but with a healthy dose of cold and a full spectrum of everything else in between.

You’d think that nature would get kind of confused by a season like that but, no, like most things born and raised in southern Alberta, it’s used to it. Come what may, weather-wise, nature either shrugs it off or soaks it up.

And it was doing a lot of shrugging in the foothills.

I came out this way because I actually wanted to watch the snow falling. We didn’t really have much of it during the actual winter and what little we did was pretty much always accompanied by a nasty, cold wind. Today, though, the forecast for the foothills called periods of snow with only a light breeze. I headed west.

See, I like watching snow fall. A nice, gentle snowfall with fat flakes sifting down, well, I just find it calming. Optimistic, I know, but as I headed for Sibbald Flats, that’s what I was hoping to find.

And it was looking good as I drove along.

I found the first snow in the hills around Jumpingpound Creek just west of the city and by the time I got to Scott Lake Hill, it was coming down pretty good. It backed off from there on south but as soon as I hit the valley where Sibbald Creek meets the Jumpingpound, it picked back up again.

The flakes weren’t quite as feathery as I had hoped but they were sifting down on the meadows just as gently as I had imagined. They settled on the grass and picked up the yellow glow from the dry stems underneath and wafted over the hillsides, softening the silhouettes of the spruce and pine on their slopes.

Down among the beaver dams they settled on the small spruce trees that were growing among the bright red willows and making them seem to glow. Along Jumpingpound Creek, the new ice over the slow water looked like it was sprinkled with sand as the flakes landed and slowly melted.

The willow catkins caught some of the flakes in the fur of their flowers and made them look even brighter. Those catkins have been showing their fuzzy faces for months now but soon they’ll fulfill their destiny and produce seeds that the wind will spread to new, fertile ground.

That might have to wait until springter is over, though. For now, they’ll just have to idle in the snow.

The snow kept falling as I drove slowly up the valley. Mine were the first tire tracks in the white blanket covering the road but I could see the little heart-shaped prints of deer and the bigger clomp marks of a moose that had just passed. Never saw that guy. But when I stopped to take some more pictures of those gorgeous red willows, I saw something else.

There was a flock of robins among the willows but I heard them before I saw them. They were all tucked in among the branches, huddled there with their feathers fluffed against the -10 C cold. And all of them seemed to be singing.

Or, at least, talking. The voices of robins are so melodious, it’s hard to tell whether they’re belting out a tune or just chatting. Kinda like listening to opera.

Either way, it was pleasant to hear them adding their chirps to the hiss of the falling snow. And to watch them hunt for bugs in the water of Sibbald Creek. A couple of them were standing in the stream and stamping their feet before stabbing their beaks at the water. Never noticed robins doing that before.

The mallards that were on the creek near the robins paddled along as the snow fell and I found a lone goose beside one of the beaver ponds. Likely a mate somewhere. And there were more geese on the beaver ponds further up.

Sibbald Meadows Pond was frozen over, though it looked like most of the ice was new. Had I been here a couple of days before springter decided to change directions toward cold, I’d guess that it would have been mostly ice-free. Same with the next pond up the chain.

But the third pond had some open water. There were mallards there and a pair of goldeneyes. And, of course, there were geese.

They were swimming around as I drove up but soon got out of the water and started walking across the ice. They were making plenty of noise, as geese do, and I half-expected them to fly off. But instead, they started walking toward the truck before settling down on the ice and going to sleep.

The muskrat was equally unperturbed. It was sitting on the edge of the ice and munching away on water plants. It never moved even as I restarted the truck. Snow was starting to build up on the backs of both the muskrat and the geese as I drove on.

I dropped down now into the Kananaskis River valley. Barrier Lake, like the Sibbald ponds, looked to have at least partially thawed and then refrozen though the west end was mostly ice-free. O’ Shaughnessy Falls, it of the handy roadside pullout, had plenty of splash ice but was otherwise running strong. I love that little trickle.

Mount Lorette ponds, being spring-fed, never freeze so they were open, as were the ponds by Sundance Lodges. But the snow had stopped.

Not only had it stopped, it looked like it had never started. The ground was mostly bare in this part of the valley while I could see that it was snowing both to the north and south. But that’s springter for ya. You just can’t predict it.

I kept heading south and went all the way to Upper Kananaskis Lake. It was still frozen over, as was most of Lower Kananaskis Lake. No surprise there. The little spring-fed seeps were tinkling along but that’s it. This high in the mountains, springter doesn’t apply. It’s still winter up there.

The snow had all but stopped as I headed back down the valley but, mercifully, the wind hadn’t picked up. There was a bit of a breeze but nothing like it often is up this way. There was even a bit of sunshine peeking through. It lit up the bright willows along the Kananaskis River and the flood detritus left behind by the high water soon to come.

Light snow was still falling back up at Sibbald Meadows. The geese had moved further out onto the ice at the upper pond while the muskrat was back in its den. Robins took off from the roadside as I stopped to photograph a particularly nice fallen tree that had just re-emerged from the ice. I heard a redtail hawk screech as I was parked there. Glad they’re back.

Only a few flakes were falling as I walked through the forest along Jumpingpound Creek. They piled up on the lichens hanging from the branches and added to the accumulation on the frozen creek. Wind had toppled trees that lay across the ice sometime over the last few months but here a few steps away from the creek, all was quiet and calm.

I stood there listening for a few minutes with just the sound of the water flowing under the ice and the chirps of chickadees to accompany me. If only there had been a few feathery flakes of falling snow . . .

There were deer along the road as I headed back to town, mulies pawing through the light snow cover, whitetails ready to panic and dash off into the trees. Back down by the big highway there were trumpeter swans newly returned from spending the winter on the Gulf of Mexico. The snow had quit and though it was still cold, warmth that had soaked into the ground from the 20 C sun just four days before was already making it melt.

I fired up the radio as I drove along and caught the weather forecast. More snow and cold for the next few days but back well above freezing right after that.