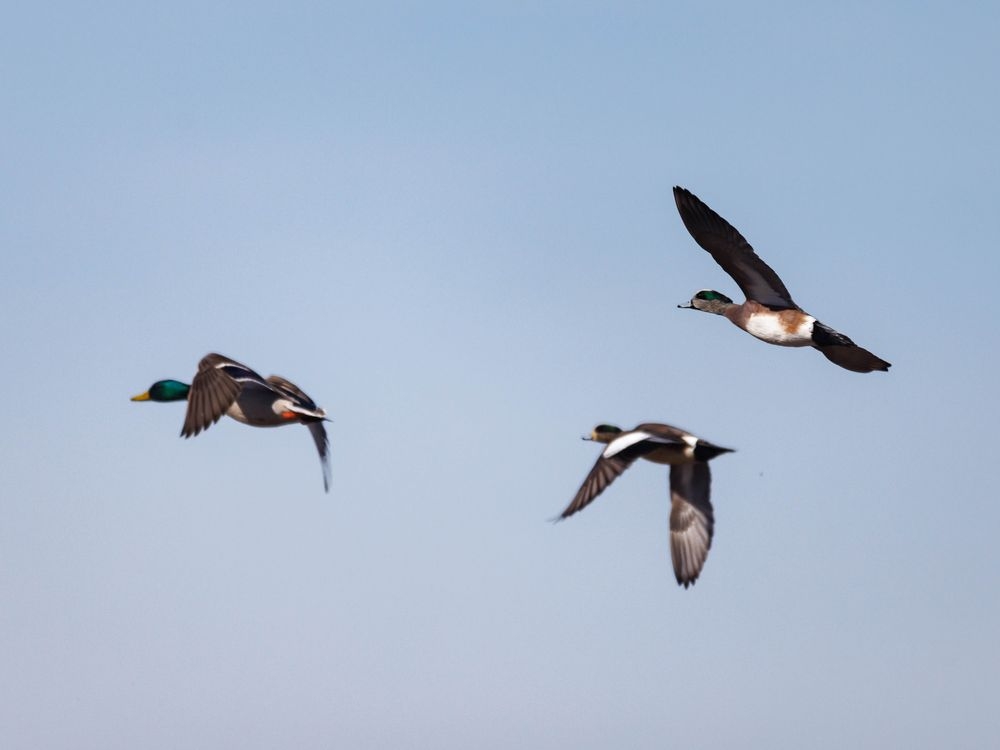 I sat in the truck wondering where all the ducks had gone.

Just the day before, less than 12 hours before, actually, this meltwater pond in a field near Cheadle had been absolutely covered with birds. There had been a few swans, a bunch of geese and hundreds and hundreds of pintail ducks paddling in the pond and circling in the sky overhead.

I’d shot a bunch of photos and video but the light was kinda boring, so I left them to do their duck thing with the plan that I’d come back to shoot again when the morning was bright.

The morning brightness worked out just right. But the ducks were gone.

Such is the ephemeral nature of migration, I guess. Here today, gone tomorrow. There were still a few pintails around as well as a handful of mallards and the ubiquitous Canada geese but the majority of that huge flock had moved on. To where, I have no idea.

So I kept on rolling.

The day was sunny and warm, the sky cloudless. A light breeze was blowing from the southwest and ruffling the dry roadside grass but it brought with it the promise of an even warmer afternoon. I saw flocks of birds as I rolled along, dark specks against the blue sky, but the ponds I stopped at were still mostly frozen over. I don’t know where those flocks were going to settle but it wouldn’t be on any of these.

But there were still plenty of other birds around.

I’ve yet to get a picture of any but there were robins around every little copse of trees. And plenty of horned larks. They mostly stay here year-round but they’ll be nesting soon and pairs of them were everywhere.

And I found a bald eagle on a nest. Not necessarily the eagle’s own nest but it was perched on one. Judging by the size of it, the eagle was likely just sitting there because it was handy. Eagle nests are pretty huge and this one was barely big enough for this single bird, let alone a mate and babies. Cool to see, though.

I was still hoping for more ducks as I drove along but every pond I checked was either frozen or dry. The cattail flats along Parfleche Creek by Standard did have a little bit of open water but there were no birds at all. I parked by the little bridge to look and listen for the blackbirds that like to nest there but all I heard was the rattle of dry cattail leaves. It is a bit early for them, though.

Willow catkins were puffed out along the Crowfoot Creek valley and when I stopped to look at them I could see that the aspens around them — their distant cousins — were also blooming. So nice to see.

But that put me in mind of crocuses. The sun was bright and the day was warm so maybe there might be a few of them starting to open. I knew a good place to find them over toward Hussar, so I headed there.

I have been to this spot many, many times before and never seen another soul. But as I was driving up the road I saw a truck coming toward me. I pulled over to let it pass and the driver stopped to talk.

And what he said stunned me.

It turns out that this trail is not the county road allowance that I had always assumed it was and I was on private land. The road was there to allow county vehicles access to a facility and was put in with the landowner’s permission. The actual road allowance was another kilometre to the east.

Although I am guilty of a little light trespassing when things I want to photograph are close to a fence or a I can get a slightly better angle by pulling a couple of metres into a driveway, I never knowingly go on private land but in this case, I had been doing it repeatedly since, I dunno, about 1987.

So I asked who owned it and was directed to a farm not far away where I knocked on the door. Paul, the owner, answered. I explained who I was, what I do and why I was there and he invited me in for coffee.

Great guy — and a great metalwork artist, too — and he told me I was welcome to look for crocuses on his land any time. Glad I stopped to ask.

Back up at the private pasture, though, the crocuses were still waiting. Soon, though, very soon.

I kept going east. I mean, I’d come this far and the day was still young so even though I was it was increasingly unlikely that I’d find another big flock of pintails out this way, I figured I might as well keep going.

But every pond I passed was dry. The snow that had fallen over the past months had all melted and either soaked deep into the ground or evaporated. Sloughs where I had photographed frogs singing in years past were dry and cracked. Dugouts that had held pairs of shovelers or gadwalls were just holes in the ground.

The breeze had picked up and, just like I’d seen down south the week before, dust was blowing across the fields. A lone snowy owl sat like a white beacon far out on an expanse of stubble. A trio of whitetail deer bounded away over a rise, kicking up dust with their hooves.

No water in the ponds. No water birds.

But I was close to Crawling Valley Reservoir now so I kept going. It would still be frozen but maybe there would be something there.

I headed down the road to the westernmost bays and was unsurprised when the expanse of blue ice came into view. It was melting for sure but it still has a long ways to go. But when I rolled down the window to take a quick picture of a pair of geese that were landing on the ice I heard a familiar sound.

It was the peeping and chirping of a flock of snow geese.

I drove ahead a little bit to see if I could spot them and there they were on a patch of open water by the edge of a bay. It was just a small flock of a hundred or so but they were the first I’d seen this spring. With them were Canada geese and tundra swans while goldeneyes and mallards flew around. There were a few pintails and wigeons as well.

The snow geese took off from the open water and flew around before landing back on the ice shelf while more tundra swans arrived to join them. A bunch of Canada geese flew in and bullied away a small squad of mallards that had been at the edge of the open water.

I saw a muskrat pop up among the swimming geese but it dove again right away. Gophers alternately looked at me as they chirped their little cries and then changed their gaze to look at the birds. Out on the ice there was a bald eagle just sitting there while on a rocky island just off shore a snowy owl was hunkered down.

I thought about getting out to look for crocuses here, too, but I knew I’d spook the birds if I did so instead I eased the truck around and headed back west again. The day was getting on and I’d already come further than I had intended. Besides, there was one more place I knew of that there might be crocuses.

I rolled due west and crossed Crowfoot Creek before heading to a rise that overlooked the valley. Near the summit I turned onto what I knew absolutely for sure was a county road allowance and parked by an open pasture.

To my complete and utter lack of surprise, there were no crocuses. But there was an ant hill.

The late-day sun was warm and the ants were busy and the top of the mound was a moving mass of red and black. I flopped down on my belly beside it.

Through my macro setup I could see the ants hard at work moving little sticks and dry grass stems around, some working alone, others moving the bigger pieces in a group. I was close enough that some of them were crawling around on the camera and my hands and I was remembering how the last time I’d gotten this close to an ant colony I’d been sprayed with a blast of formic acid.

This time, though, the ants were too busy to bother to unleash their defence system and they went about their business. I had a close call, though, as I went to stand up again. I’d forgotten that I was wearing jeans instead of my usual loose adventure pants so when I went to get my legs under me to stand up, the stiff jeans snugged around my knees and I nearly went face-first into the ants.

Luckily, I caught myself. Instead, I crawled away and took advantage of my low angle to look for any signs of spring. And they were there. Little patches of green growth among the crunchy prairie grass, new green buds, even a few very tiny grasshoppers. A little rose bush held a single, desiccated, ruby-red rose hip.

I drove on now with the sun mostly hidden behind a bank of chinook cloud. I was thinking that maybe the pintails I’d seen by Cheadle the day before might have decided to return to spend the night so I rolled west thinking to check it out.

A flat tire scuttled that plan. By the time I got it changed and was rolling again, the day was nearly done. But I did have one more place to look.

Weed Lake by Langdon was still mostly frozen but there was a tiny bit of open water. Ring-billed gulls were gorging on dead Prussian carp — those damned fish are everywhere — while goldeneyes and mallards paddled around. And there were swans, huge, magnificent tundra swans that flew off just as I stopped. A thin beam of sunlight caught them and set them aglow against the pink and blue of the evening clouds.

I never did find the pintails. Never found any crocuses, either. But I did meet a great guy named Paul and I did have a pretty wonderful spring day out on the prairie. One of many that I am sure are to come.

But for now, home.