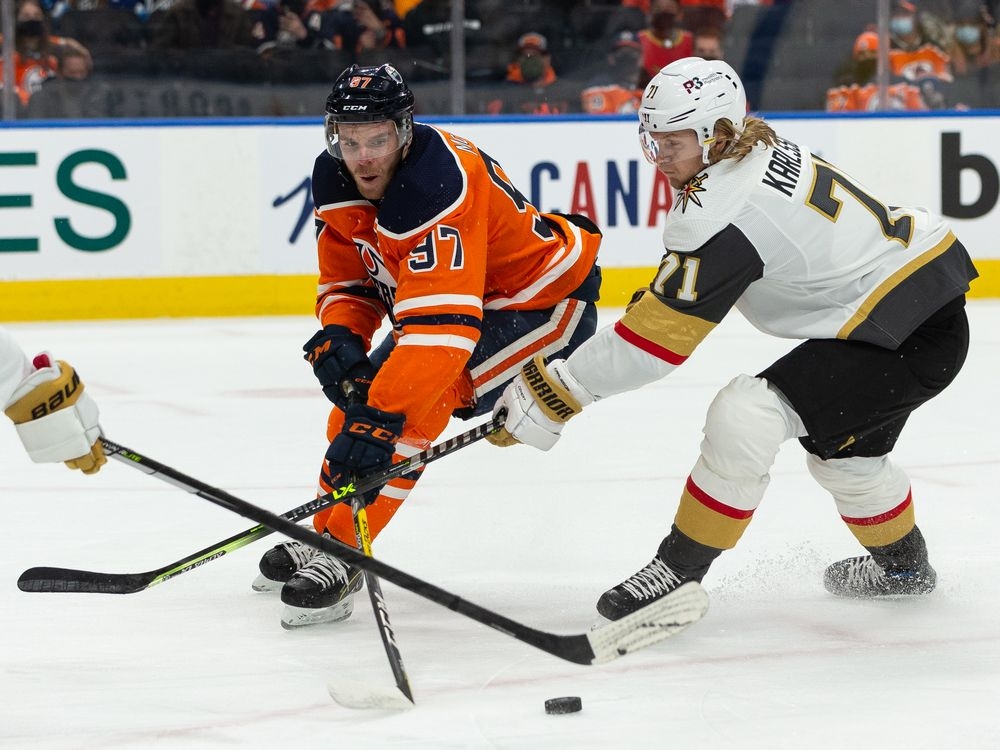 There are big games and then there are EXTRA BIG games.

So as much as Edmonton Oilers coach Jay Woodcroft always says, “it’s just two more points up for grabs” with whatever team is sharing the playbill, Saturday afternoon’s game with Vegas Golden Knights is much more than that.

It’s the ultimate four-pointer with the Oilers five points ahead of Vegas (92-87) in the scramble for playoff spots in the Pacific with both having seven games remaining.

“Big game for both sides and we’re back in our building (nine wins in the last 10 games) where we’ve done a good job for the last month or so. We’re making it a tough place to play,” said Oilers centre Ryan Nugent-Hopkins.

Off Friday’s practice, it looks like Mike Smith will get the start — was in the home team net — off his 43rd career shutout in Nashville Thursday. And rookie Logan Thompson, the undrafted farm team goalie who is 8-4 in 13 games, will be in net for Vegas because Robin Lehner has returned home due to a health issue with a family member.

The Oilers won both meetings in Vegas behind Mikko Koskinen and lost 4-0 here Feb. 8 with Smith in net when Golden Knights captain Mark Stone exited post-game with a back issue for two months.

But Smith, 40, is on a roll, five straight wins and 7-2-0 in his last nine. He became the second oldest Oilers goalie to get a shutout with Nikolai Khabibulin the only one more aged back on March 26, 2013, a 43-save performance against St. Louis Blues.

Smith robbed Matt Duchene with a fantastic glove stop to ensure the shutout against the Predators and got some chiding from the Nashville players.

“I heard (Ryan) Johansen say ‘you’re too old for that,’” laughed Smith.

Smith’s had a roller-coaster season — an ankle issue which kept him for a couple of months, then a partially torn tendon in his thumb, plus getting sick—but he’s on top of his game now.

“It’s not how you start, it’s how you finish,” said Smith, whose 43 shutouts ties him with Gump Worsley and Brian Elliott for 38th all-time and one back of Miikka Kiprusoff and Ryan Miller.

“I’m not too worried about what’s past. You can’t control that. All you can control is your next game and I’ve been really focussed on that. Feel good in the net and that’s what you want at this time of you. You want to play important games. It’s the most fun time of year.”

While Smith was sterling in Nashville, Leon Draisaitl had his sixth career regular-season hat-trick and 15th multiple-goal game of the season to get to 54 goals. That ties him with Glenn Anderson for most goals in a season by an Oiler not named Wayne Gretzky or Jari Kurri. Anderson had 54 in ’85-86.

Draisaitl’s stick blade is more paddle than anything, a continual source of joking for his teammates — maybe the NHL’s most unusual looking stick — but nobody uses it with more power or dexterity. Especially against the Predators where he has 17 goals in his last eight games against the Predators and seven goals in 11 shots over his past two meetings.

“Has anyone changed the Nashville Predators wiki page to show that Leon Draisaitl owns them?” said the fan. Not the current 12 as part of Predators Holdings LLC.

“He’s a special talent obviously, the chance I have to play with Leon and Connor day in and day out, it’s something you don’t want to take for granted,” said Smith.

And back to the remarkable paddle which Smith says could be used for flipping pancakes, an IHOP utensil.

“I actually have seen a stick like that before … closest pattern and lie is (Pavel) Datsyuk,” said Woodcroft, who was in Detroit when the Hall of Famer to be was weaving his magic, stealing pucks on the back-check, feeding players offensively.

The other player storyline for Saturday’s game? The first meeting between Connor McDavid and Jack Eichel as division rivals after Eichel’s trade to Vegas from Buffalo. Eichel has 21 points in 27 games for the Golden Knights, 12 goals.

This ‘n that: Kris Russell, who belted Mikael Granlund with a textbook shoulder to chest hit early in the Nashville game, showed why he’s so valuable to the Oilers. “We heard it from the bench, quite the collision. Got the bench fired up,” said Nugent-Hopkins. Russell dressed as the seventh D after being out since March 22 in Dallas. “Kris set the physical tone early in the game and had a lot of really good plays with the puck,” said Woodcroft. “We feel comfortable going 11 and 7.” They’ll probably go back with it against Vegas. If so, forwards Derick Brassard, Devin Shore and Josh Archibald will be out …Vegas forward Keegan Kolesar escaped NHL supplementary discipline for a shoulder to Calgary defenceman Chris Tanev’s face Thursday.