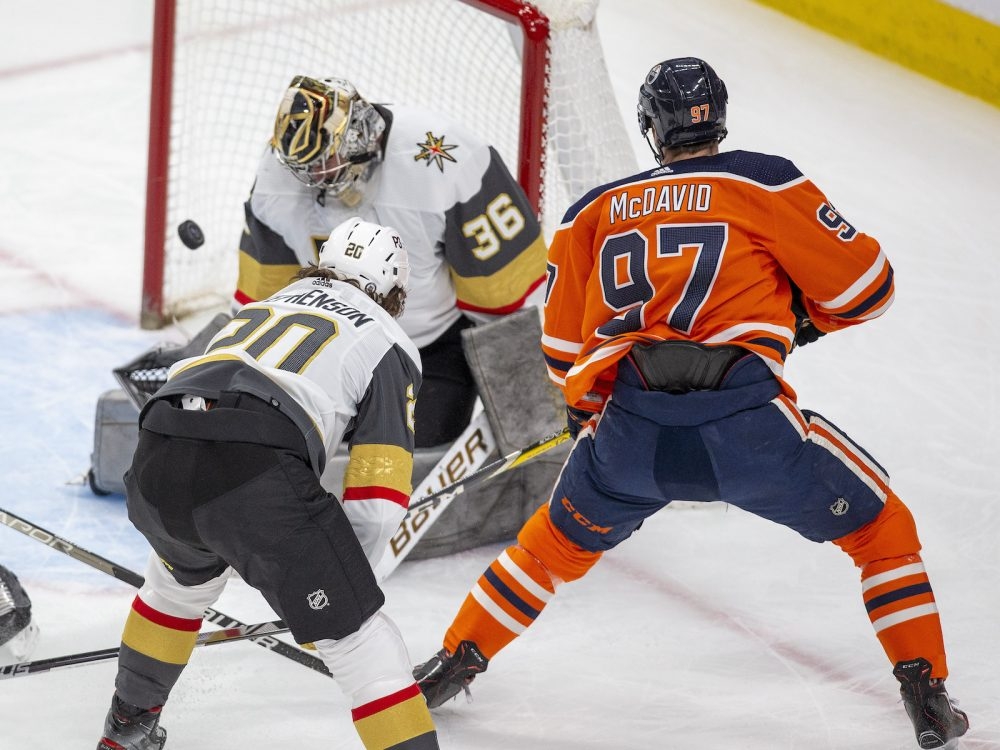 The Vegas Golden Knights sidestepped the usual expansion-team route by creating their own window of opportunity straight out of the gate in 2017.

Instead of drafting and developing, the Golden Knights made a number of shrewd moves to ice a competitive team right from their opening face-off, and have sacrificed a number of high-end picks in order to keep their Stanley Cup window open.

Yet it still may be closing for the Golden Knights, who with a 4-0 loss to the Edmonton Oilers at Rogers Place on Saturday afternoon, fell further out of a playoff spot in the Western Conference.

“We have to regroup,” said Golden Knights head coach Pete DeBoer. “We’ve talked about this, we knew we weren’t going to run the table and we talked about it two weeks ago; we were going to drop some points along the way, but we’re still right in the thick of things. We have to have a short memory and get ready for the next one.”

The Golden Knights have managed to stay competitive through its first five years of existence by essentially going out and acquiring as many high-end pieces as possible, regardless of the cost to their future.

They picked up Max Pacioretty, Alex Pietrangelo, Mark Stone, Robin Lehner, Nolan Patrick and Jack Eichel, paying a heavy price for each of them. Not making the playoffs would be a huge blow to the Golden Knights.

“We have six games left and we control our destiny here,” Pietrangelo said. “All we can do is worry about the next game. We can look at this and know it’s not good enough and get home tonight and get ready tomorrow for Monday and try to build our game back up.”

With a veteran-laden squad, it’s too early to write the Golden Knights off this season. And coming into Edmonton they had been playing well, winning seven of its previous nine.

But they do find themselves on the outside looking in, in the wild-card race, and have work to do in order to catch the Los Angeles Kings for third place in the Pacific Division.

The Golden Knights return home to host the New Jersey Devils, Washington Capitals and San Jose Sharks starting Monday, then close out the season on the road against the Dallas Stars, Chicago Blackhawks and St. Louis Blues.

“We have to look in the mirror and know we need to be better,” Pietrangelo said. “The group of us need to make sure we are ready for Monday.”

Knowing how hard Evan Bouchard can shoot the puck, Kailer Yamamoto did his best to get out of the way of a blast from the Oilers defenceman midway through the second period, but ended up taking the full brunt of it.

Yamamoto leapt to get out of the way as Bouchard was stepping into the puck, but it still caught him on the left leg.

Yamamoto hobbled to the bench and straight down the tunnel in obvious pain.

Surprisingly, however, he was back on the bench shortly thereafter and finished the game.

“What a warrior,” said Oilers head coach Jay Woodcroft. “It’s a bruise and I was proud of him that he came back and finished the game for us.”

Zack Kassian earned his reputation as a playoff performer with an excellent postseason in 2017 and looks to be gearing up for another this year.

Kassian had one of his best games of the season against Vegas on Saturday, running as many people as possible and setting up the winning goal for defenceman Kris Russell.

Kassian did pass up an open net to set up Russell for his first goal in three years, but he was effective on both sides of the puck and was the physical presence the Oilers need him to be in order to go on a playoff run.

“Zack Kassian played one of the best games I’ve seen him play since I’ve been here,” Woodcroft said. “He was simple, straightforward and direct. He was physical, and made a nice play on that first goal. He was very good for us tonight.”

Struggling to gain traction the past two season due to injury, Kassian is finding his game at just the right time for the Oilers. He and Evander Kane make solid bookends in the grit department for the Oilers heading into the playoffs.

“Every game is big from here on out,” Kassian said. “You look at the standings, you can’t really lose two in a row with how tight everything is. Obviously, Vegas had been feeling good about their game and went in and whacked a good Calgary team (6-1). They come in here, and for us to put together a statement game like that, it helps our group confidence-wise.”

Notes: It appears the Oilers are getting closer to signing University of Denver standout Carter Savoie after winning the NCAA national championship. Savoie is finishing his sophomore year and has the option of returning to school or turning pro … Oilers prospect defenceman Dmitri Samorukov is not expected to play again this season for the Bakersfield Condors after sustaining a shoulder injury, although it does not require surgery … Forward Dylan Holloway is currently out of the Condors lineup with a charley horse. He has eight goals and 21 points in 32 games for the Condors after recovering from a hand injury.